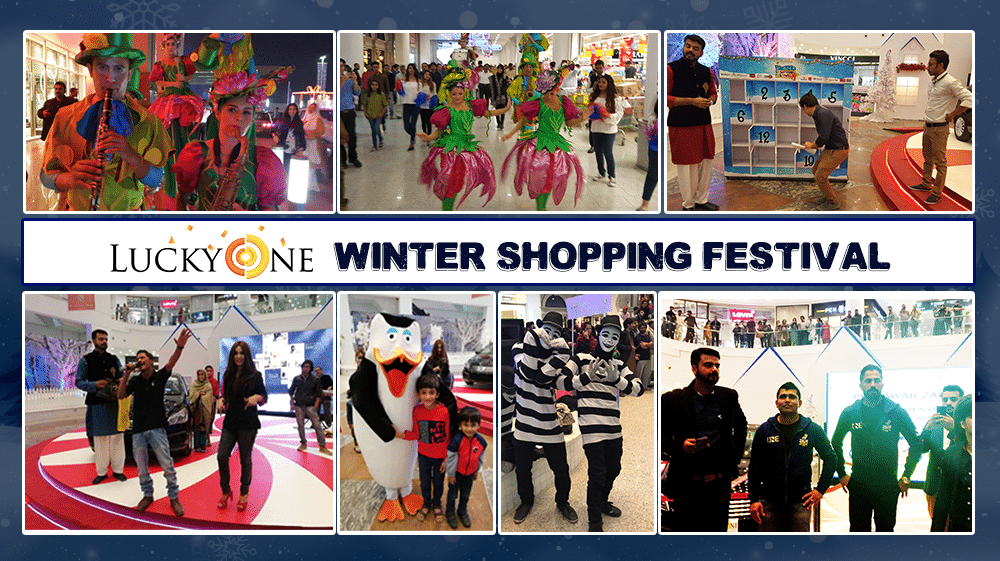 2018 came in with a lot of surprises and festivities. While most of us were busy planning their New Year resolutions or sending Christmas gifts for all loved ones, the Lucky One Mall treated shoppers with their Winter Shopping Festival.

Shoppers who visited the Lucky One Mall during December & January experienced giant winter themed decorations & displays, coming together for a unique festival celebration. The enthusiastic and glamorous celebrations began on the 20th of December 2017 and continued till the 10th of January, 2018, with many surprises each day.

Lucky One offered irresistibly tempting discounts on more than 100 brands. Along with the discounts, a lucky draw was also held for people who shopped worth 10k, with promising giveaways including 3 Suzuki Ciaz.

The show did not conclude here. A great performance by Darvesh & Sounds of Kolachi, in the honor of an unforgettable legend, Muhammad Ali Jinnah, was also held on 25th December, 2017.

“While Lucky One Mall has become the shoppertainment hub, it also attracted talented people. LuckyOne got TALENT – invited people from all walks of life to show what they have got and earn instant recognition with rewarding gifts” – Danesh N. Dubash, General Manager Marketing.

Catering to the interests of all sorts of shoppers, LuckyOne Mall organized an exclusive Grand Musical Flower Parade, with performers originating from UAE, UK & Columbia, happening four times a day, making sure that no one missed out.

To appreciate their efforts, shoppers at the Lucky One Mall can share their pictures at the mall with hashtag #LSWF over social media.