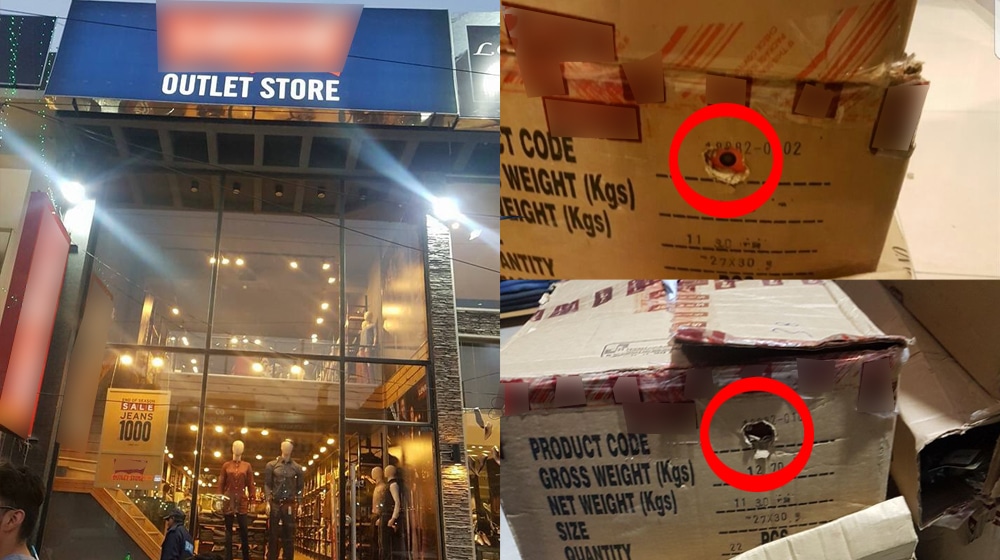 Camcorders hidden in women’s try-rooms of a garment shop have been uncovered by a customer and police has arrested the suspects.

The store in question, it is learnt, is situated at ChenOne Road in Faisalabad.

Police have already made arrests with two people apprehended as suspects.

HIDDEN CAMERA caught in the TRY ROOM of #Levis store in #Faisalabad.

These hidden cam — said to be a smartphone — was discovered by a law student, Noman Zaffar, who visited the store along with his sister. Noman’s sister went to the changing room and found camera (smartphone) concealed in the room.

To gather evidence, the customers recorded footage of the hidden video camera and their location via their cell phones.

Unsurprisingly, the staff at that outlet – after discovering that their gig was up – tried to confiscate their cell phones to get rid of the evidence.

Shockingly, as per the customer’s accounts, the staff even threatened to post their changing room videos over on social media.

As Noman blew the whistle on this practice, his story went viral over social media.

Here’s how Pakistanis reacted about the alleged breach of privacy and lack of decency by the outlet in question:

Any fitting room which is not empty and has boxes stacked inside surely has hidden cameras installed Personally seen try room of brand stores in #Pakistan like #JDOT @LEVIS @ChenOnePakistan @AmirAdnanDesign @GulAhmedIdeas full of inventory increasing probability of hidden cameras https://t.co/xVRxxB0oS1

Hey @LEVIS great work putting hidden cameras in ladies changing rooms. Hope there are going to be some consequences for this https://t.co/TOxqiJpgAZ

#levis store in #Faisalabad had hidden cameras in ladies 'try-rooms'.

@LEVIS @LEVIS Store must be SEALED and STAFF must be Arrested on Urgent base after HIDDEN CAMERA'S in ther CHANGE ROOM, It is Test case for PUNJAB Govt @GovtOfPunjab @CMShehbaz @MaryamNSharif #Levis #ChangeRoom #HiddenCamera's #SHAME pic.twitter.com/vdAb0OT01v

The suspects, namely Rizwan and Fayyaz, tried to get their hands on the customer’s mobile phone to delete the evidence.

According to reports, the camera had been installed by two third party employees without the management’s consent.

The outlet got sealed according to Madina Town’s superintendent. He added that a mobile phone, that was used to make videos, had also been confiscated.

After interrogation, the suspects revealed that they started filming the changing rooms around three days ago before getting caught. They said that they only managed to record three videos but deleted them afterwards.