Two women have accused him of sending inappropriate messages online. Following these allegations, Patari’s official Twitter account mentioned that Khalid Bajwa will no longer be serving as its CEO effective immediately. The official Twitter handle also mentioned that investigations against him were ongoing even before the latest accusations.

Here’s the company’s official response to the matter:

It all started when two women came forward on Twitter and narrated their situations regarding Khalid Bajwa and how he harassed them in the past.

Mehravar Ali, one of the two women who came forward, mentioned that Bajwa made her feel “uncomfortable and overpowered” and that he used to give her “unwelcome hugs.”

I mean, this is the most recent convo I have after which I kind of gave up and couldn’t make any more excuses so just stopped replying and blocked him. I felt uncomfortable and overpowered by a man twice my age. We bumped into each other once or twice in public spaces/social e

Ali has also mentioned that she knew him before Patari was even launched, pointing to a long of history of facing such abuse from Patari’s ex-CEO during her time in college.

Under any false pretense and take advantage of them. It could be as trivial/important as asking for pictures you’re not willing to send. Attaching screenshots. Have confided in people over the years who can confirm his creepy behavior. Stop glorifying abusers/harrassers pic.twitter.com/qhudhTgwZx

The second lady who accused Bajwa had this to say about her experience:

“Bajwa used to force me to meet him. He would make plans that he’d pick me up from college and take me to his office.”

After this untoward encounter, she blocked him on social media. However, she alleges that Bajwa was able to contact her through her Instagram account and requested that she doesn’t say anything more about his behavior publicly since he is married and has a daughter as well.

Speaking to a local news outlet, the Chief Operating Officer of Patari, Mr Ahmer Naqvi had this to say regarding the recent developments:

“Our official statement is the only thing we will be saying right now.”

People have taken to social media to share their thoughts regarding the whole episode:

Read this thread.
I have also previously heard rumours about misconduct @patarimusic cofounder @hisBaajaness. I'm glad @mehravarr had the courage to call him out.

ALSO: Patari has confirmed that he is stepping down from his post. https://t.co/u19J3MMPXN

Mehravar Ali is thankful about the support she has received in light of this episode:

I am overwhelmed and amazed at all the love and support. Recieved very little backlash. What a time to be alive. I regret not opening up about this earlier. Look what happened, girls! So so proud and happy. 💗💗 pic.twitter.com/P9kwBrDbOw

Problematic behavior needs to be called out:

I can’t believe people are so oblivious or in denial or simply don’t wanna call out problematic behavior RIGHT IN FRONT OF THEM. seeing so many tweets “i had no idea” and all. You all kind of knew yaar. Come in. These things don’t happen in a vacuum or isolation.

The #MeToo movement continues on:

Loving every second of this Pakistani #MeToo thing going on. Please don't stop.

Rabeel Waraich, CEO of Sarmayacar, a prime investor behind Patari, has issued the following statement.  As of now, Ahmer Naqvi has been appointed as the interim CEO of the company. 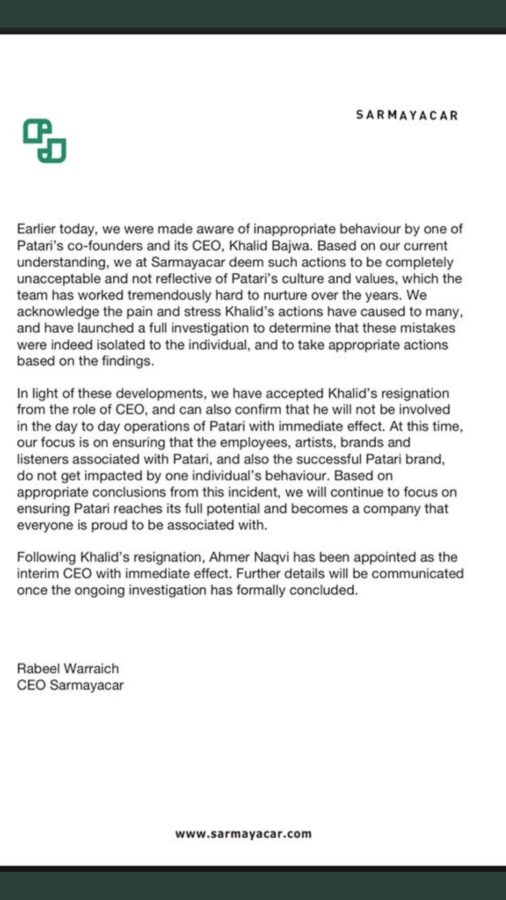 This is a developing story and we will be updating it with new information as it becomes available.