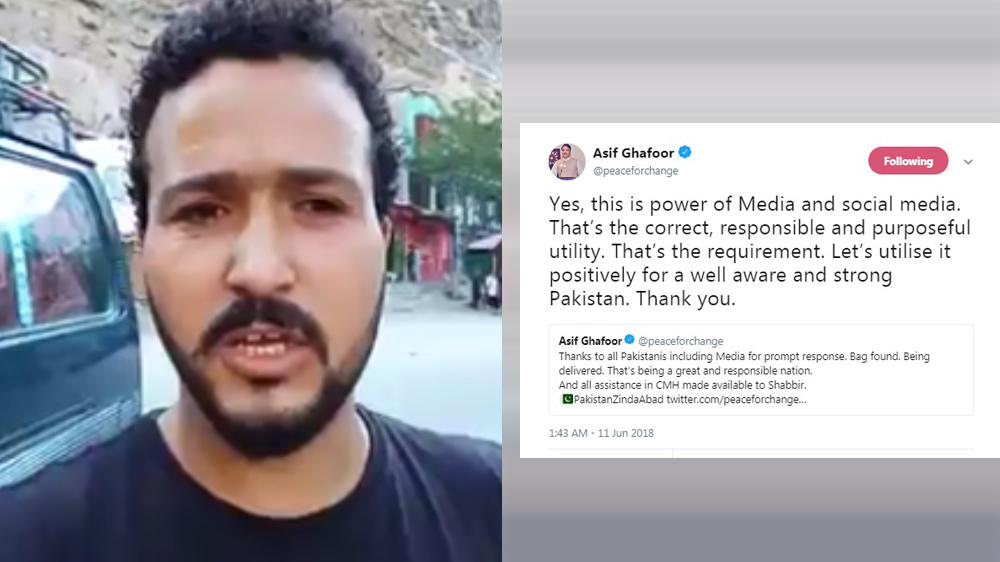 The social media has showcased its power yet again as Shabbir Hussain finds his lost bag.

When you travel, chances are that you might have forgotten to carry something important with you. Or worse, you may end up losing your luggage. We’ve all been there.

However, for some people, such as one Shabbir Hussain who was traveling from Islamabad to Skardu, losing his luggage represented a life or death situation. His bag went missing midway through his journey as it fell off the top of the bus he was traveling on.

It turns out that the bag contained the medical certificates of his ailing father who is being treated at Combined Military Hospital (CMH) for a brain tumor.

Shabbir went back to look for the bag, however, his hopes of finding it vanished when he couldn’t locate it. Having no clue as to what to do, Shabbir turned to social media for help. He recorded an emotional video in which he told the viewers that the bag contained his important educational documents.

However, most important of all, Shabbir added that his father’s treatment would come to a halt if he doesn’t find those documents in time.

Shabbir couldn’t hold back tears, urging everyone to share his video so that he doesn’t lose hope and find his belongings. Call it luck or just sending his message via the right channel, social media played its part and the video went viral in a short span.

Many people, including Major General Asif Ghafoor – DG ISPR – shared the video and asked the audience for help. You can see Shabbir’s message in the video below:

Request, please help our this Pakistani brother….
And dear Shabbir if u see this tweet please share your cell number through my inbox for assistance at CMH. pic.twitter.com/CNRwzwZ364

I request everyone to share this video and help Shabbir Hussain from Skardu find his Red Bag. #HelpShabbirHussain https://t.co/zVpDRKP3Dt

Kindly spread this video so that this boy Shabbir Hussain finds his bag that he dropped at a place called Sheraz.. on way to Skardu from #Islamabad. His documents r very important for him. His father is suffering from brain tumour. Its a red colour bag. pic.twitter.com/hD1iOfdfDE

To the joy of many, Shabbir Hussain has finally found his bag. Asif Ghafoor announced that the bag is being delivered to Shabbir. He added that further assistance at CMH will be given to his father as well.

Thanks to all Pakistanis including Media for prompt response. Bag found. Being delivered. That’s being a great and responsible nation.
And all assistance in CMH made available to Shabbir.
🇵🇰PakistanZindaAbad https://t.co/GEDg7HF0II

We often see too much hate over social media these days. However, Shabbir’s case has highlighted that it can be a force for good too.