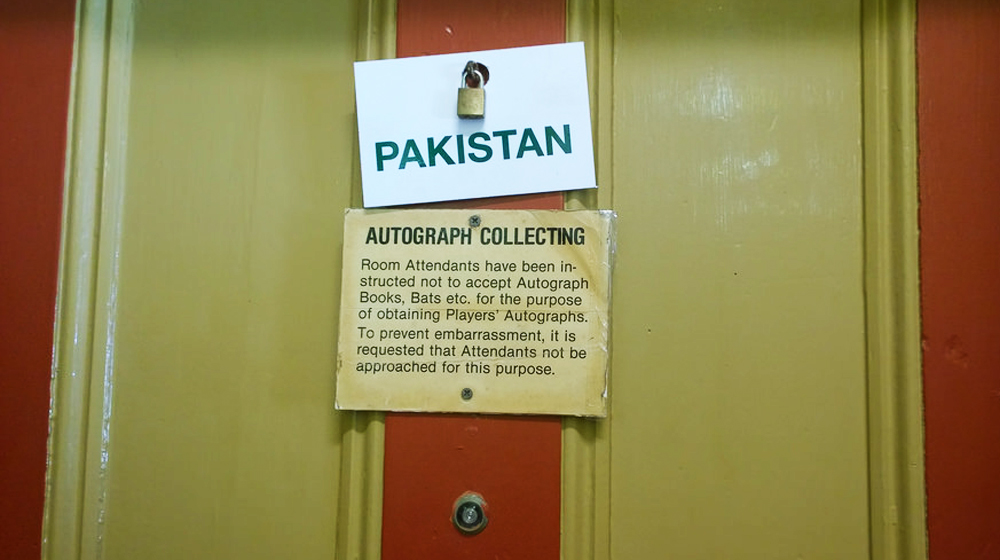 One wicket away from a series loss, Hasan Ali adjusts his helmet and gets ready to face Ajaz Patel. With cool breeze blowing from left to right, Patel gives flight to the ball and invites Hasan to take a bite and he acknowledges. A wild slog shot to a flighted, curving and spinning delivery results in a leading edge towards point and this was it!

A day which should have belonged to Pakistan, ended in catastrophe for the men in green. Despite heroics from Yasir Shah, Pakistan ended up surrendering the series to New Zealand for the first time in 49 years!

The myth about Pakistan somehow losing matches from unthinkable and winnable positions is still alive and well. After a phenomenal collapse, Sarfraz Ahmed, in his post-match interview, called out the middle-order batsmen despite scoring 25 and 28 runs himself in respective innings of the deciding match.

Crippled by pressure and failing to fix the mentality issues of the squad, Sarfraz Ahmed, Micky Arthur and other members of the management are facing serious heat.

Planning: Word Not Found In Dictionary

Relatively lower total to chase? Expect Pakistan to surprise and gift the Test match to the opposition. This is not the first time Pakistani batsmen have collapsed.

Here are a few instances when Pakistan left the entire nation in disbelief:

Moving on to the latest catastrophe against New Zealand, the lack of planning was highlighted when Williamson and Nicholls took charge of the Test match. Despite taking 4 early wickets, Pakistani fielders and bowlers went into a shell and looked extremely passive.

For me, the blame does not fall on Sarfraz Ahmed alone. Pakistan looked nothing different after the break, implying that the input from the coach and/or management was not there and the players were left to handle the Test match on their own.

On a personal level, I do believe that players should handle whatever is thrown at them during the match. However, that does not mean that coaches and other members of staff do not play an important role in a Test match.

The notes were discovered by Paul Radley, a journalist for The National newspaper in Abu Dhabi.

Following the end of the 2nd Test match, which Pakistan won, notes were left on the board of the home-team’s dressing room which revealed the strategy for the greens – or lack off, better yet.

There is no doubt that Pakistan is the most fierce team in the shortest format of the game, maintaining the top spot for a lengthy period of time. But when you take a look at their performances in Tests – it reaffirms the point of view that Pakistan can only perform well as long as there is no planning involved, like in T20s, which only requires the teams to score big and take wickets quickly.

Like the third and final Test match against New Zealand, when Williamson and Nicholls put on a big partnership – Pakistan look all out of sorts and had no idea what to do in order to break the partnership and get back into the game. Players repeat the same mistakes from what they did a year ago and things have come to a standstill in the longer formats for greens.

Let’s dig a little deeper and analyze the strategy/notes which were left behind.

Is This a Children’s Cricket Team?

After a slight stutter when bowling to New Zealand in the second innings, Pakistan ultimately won the match comprehensively — by an innings and 16 runs — the shocking things written in the notes cannot be easily ignored as it points towards an inept management incapable of coming up with a useful plan.

First, let’s take a look at the images taken by Paul Radley of the board who was present in Pakistan’s dressing room: 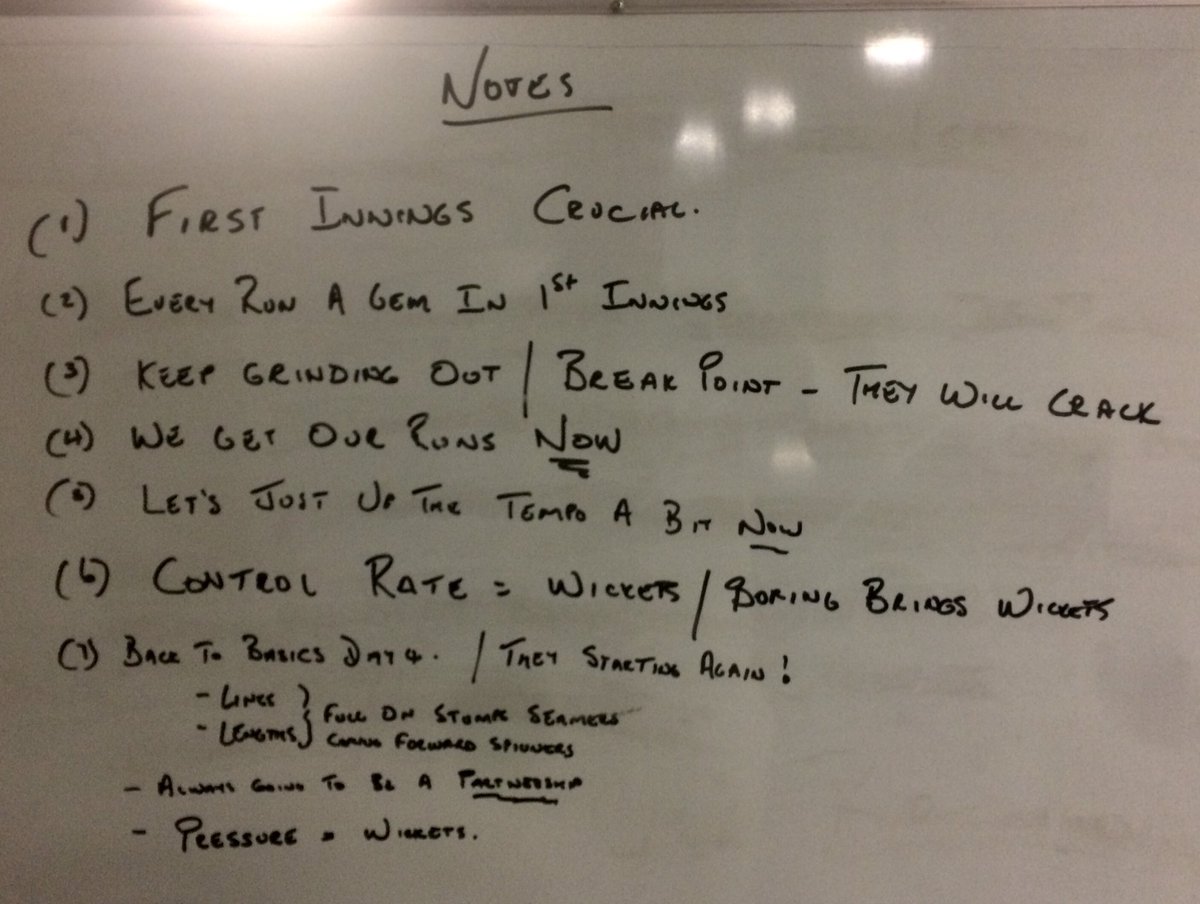 First of all, how does an international team forget to wipe their entire strategy before they leave the dressing room; be it on a whiteboard, printed pages or anything remotely similar?

Keeping that aside, let’s just discuss the contents of the strategy for now.

Phrases like “first innings is crucial” or “keep grinding out” are something you might hear in a cricket camp for young children. But hold on! These are actual words written out for the Pakistani team by the management.

There has been a lot of controversy surrounding Micky Arthur as of late and this drives home the point even further that with him in-charge, Pakistan lacks the cutting edge and the fragile mentality has not improved; which was showcased in the last Test match where Pakistan rolled over and gifted the victory to New Zealand.

Instead of figuring out what field placements are required and/or which bowlers should bowl from which end, instead the management emphasized on how building pressure can lead to wickets — which is a basic fact of the game.

Similarly, other silly things such as ‘lets up the tempo a bit now‘ and ‘we get our runs now‘ were written on the board. You have to take into account and they have played the game their entire lives and yet, they have to sit through the sessions and waste their time listening to such redundant bogus. 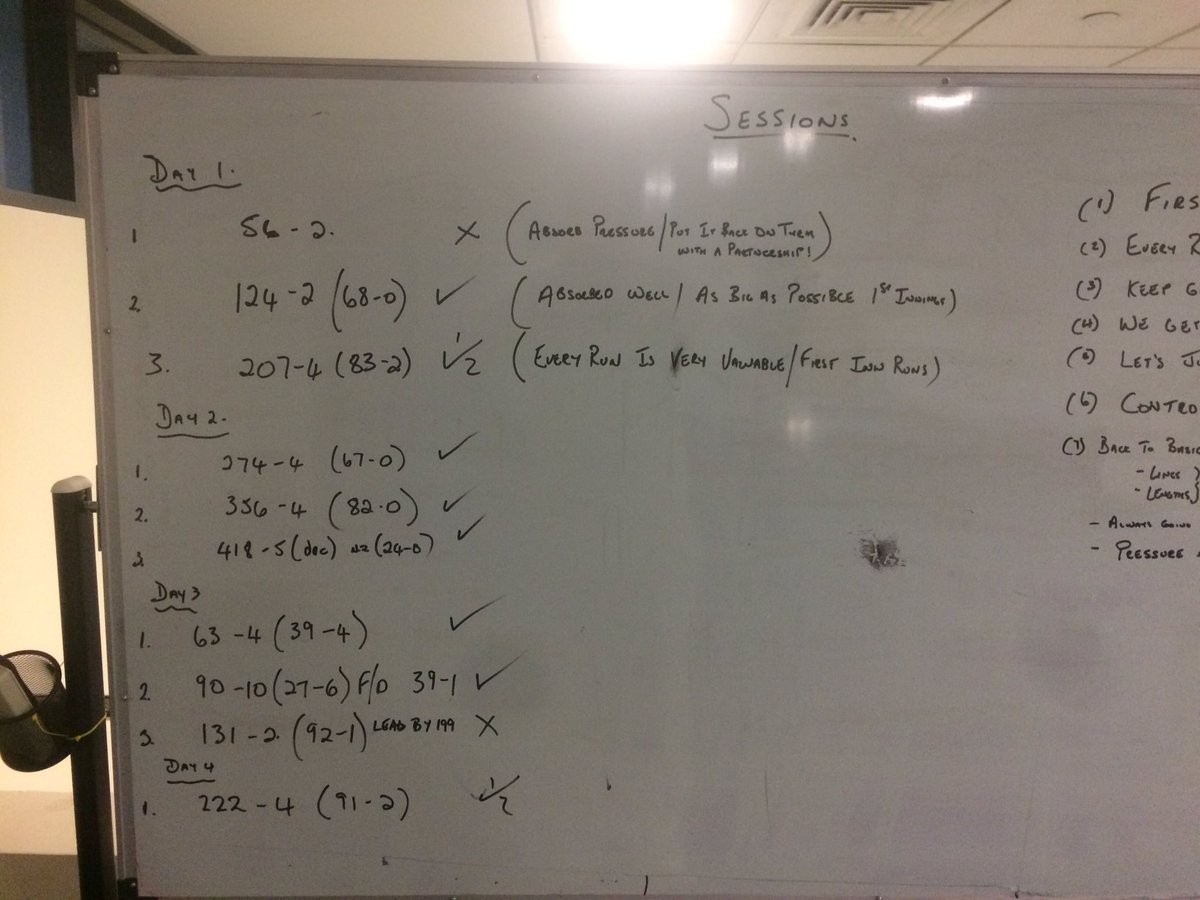 When you look over to the things written under the session heading, the management has just written the scores of each session. The scores written are accompanied by more redundant things like ‘every run is very valuable‘.

The biggest concern that arises here is that Pakistan team management, mainly Micky Arthur, is forcing Pakistan to play a brand of cricket which is neither exciting nor effective. The strategies should change from match-to-match but Pakistan’s plans remain the same irrespective of the venue or the conditions: play defensive, grind runs and stop the other team from scoring.

We saw that before Fakhar Zaman got injured and was regularly featuring for Pakistan’s Test side, he was being asked to adopt a defensive approach. In the following matches, Zaman complied and that is when his match performances started to deteriorate.

Similarly when you argue when it comes to Pakistan’s bowling, stopping runs in a 5-day match is not the recipe for success. So why does Pakistan stick with this useless ideology?

If you take an example of India or Australia of the past, all the greatest Test playing nations have capitalized on putting pressure on the oppositions, especially when they are chasing the game. As the saying goes, “attack is the best form of defense.”

The performances on the pitch generally stem from the game-plans discussed with the management and if Pakistan keeps playing a brand that makes the players uncomfortable in the field then it will reflect in their performances, as it has done in the past. Natural gameplay, combined with actual strategies are the only way that Pakistan can succeed wherever planning is required.

What do you think? Let’s discuss this in the comments section below.