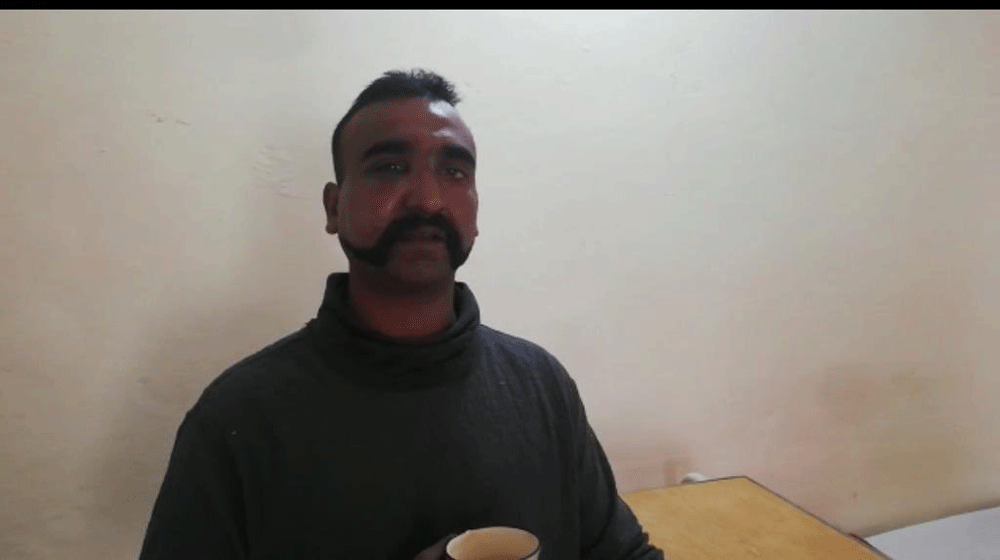 In a recently released video, the captured Indian pilot can be seen putting ‘it on record’ that Pakistan Army’s treatment with him was quite impressive and professional.

While responding to a question, Abhinandan said, “Yes, I have been. And I would like to put this on record that I will not change my statement if I go back to my country also.”

He said he was looked after well and praised Pakistan Army officer by saying that they were thorough gentlemen, starting ‘from the captain who rescued him.’

He informed in the video that he was married and hailed from ‘down South.’

When asked to describe the aircraft he was flying, IAF pilot said, “I am sorry, I am not supposed to tell you this, but I am sure you have found the records”. He also declined to comment on the nature of his mission – and he was not pushed for it.

Captured as a prisoner of war, Wing Commander Abhinandan can be seen sipping tea from a cup, and saying “The tea is fantastic, thank you.”

Meanwhile, DG ISPR Major General Asif Ghafoor has confirmed that Abhinandan is the only pilot under custody.

In response to several appeals from the Indian side, DG ISPR tweeted to confirm that the captured pilot was being treated as per norms of military ethics.

“There is only one pilot under Pakistan Army’s custody. Wing Comd Abhi Nandan is being treated as per norms of military ethics,” the tweet read.

There is only one pilot under Pakistan Army’s custody. Wing Comd Abhi Nandan is being treated as per norms of military ethics. pic.twitter.com/8IQ5BPhLj2