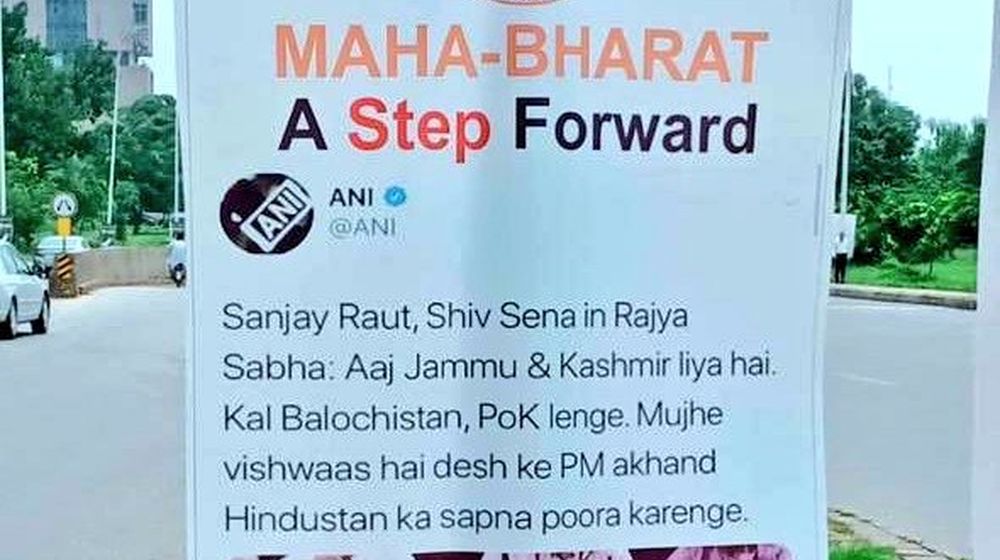 In an unprecedented development, pro-India posters emerged in Pakistan’s capital city of Islamabad a day after  India revoked the special status of Indian Occupied Kashmir.

According to the details, dozens of anti-Pakistan banners were removed from various parts of Islamabad following pictures and videos of the banners were posted online. The late response from the authorities has sparked anger among Pakistanis who are bashing the government and the local authorities for the controversy.

The suspect who posted the banners featuring a statement by Indian lawmakers Shiv Sena and Sanjay Raut has been arrested from Blue Area.

The statement roughly translates to:

Today we have taken Jammu and Kashmir. Tomorrow we will take Balochistan and Pakistan Occupied Kashmir. I believe that the PM will realize the dream of United Hindustan.

Reports suggest that the suspect had received an order for printing and posting banners from a resident of Gujranwala.

The banner also sported a logo saying ‘Akhand Bharat Real Terror’ which questions their intended purpose. Some Twitter users are justifying the placing of banners to awaken the Muslim Ummah and that the posters were anti-India and not the other way around.

The Twitterati have slammed the administration for their failure, while some are saying otherwise.

This anti pakistan poster is displayed in islamabad blue area. Govt of Pak and CDA is sleeping while enemy is advertising in the heart of capital of Pakistan. Bravo pic.twitter.com/ozrxB3xhV3

It's height or irresponsibly by capital city police&all other related departments.
Who could one can think that such anti Pakistan posters found hanging on the Islamabad main roads & culprits r still safe & unknown.
What about safe city camera around the city?
Is it all useless😭 https://t.co/BW1sgJIDHx

High time that our agencies focus only& only upon intelligence & security pic.twitter.com/N0I6AIiqfH

Where was our premiere agency when these posters were placed in Islamabad. No CCTV caught the culprits. Right? pic.twitter.com/rxsTPTMqdY

This is islamabad expressway, today look at the words written on the poster, clearly saying, get ready india is coming for us now pic.twitter.com/8XBJyV9Q7z