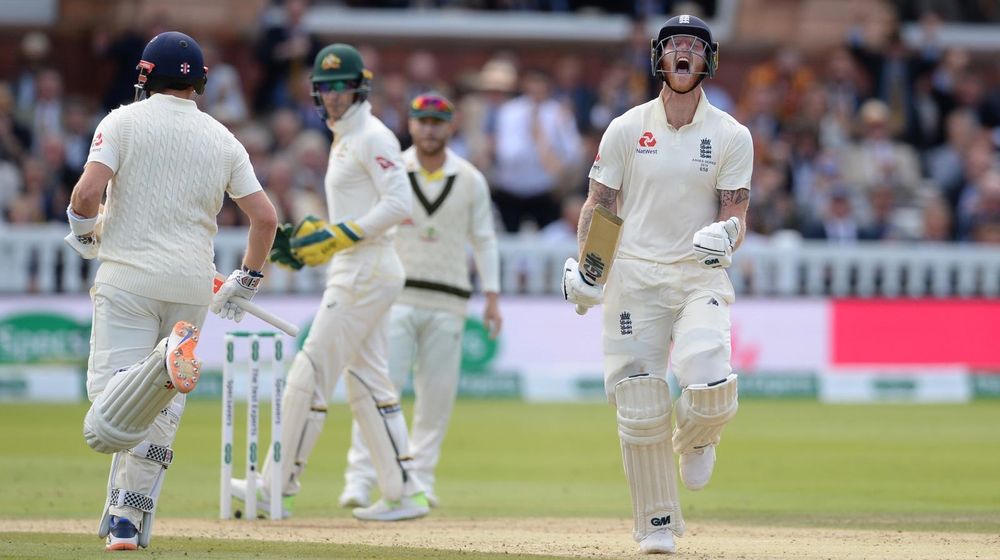 Cricket lovers across the globe witnessed one of the greatest innings of all time as England’s World Cup hero, Ben Stokes produced magic with his bat yet again.

The 28-year-old all-rounder was at his absolute best under pressure as he got England over the line against all odds. The come-from-behind win has kept England in the Ashes as they drew the series level at 1-1 with 2 matches still to go.

Superman Stokes ended with 135 not out as he joined with Jack Leach for a last-wicket partnership of 76*. Interestingly, the slow left-arm bowler, Leach scored only one run. His single, however, was the one which helped level the scores.

Stokes smacked 8 sixes in his knock, single-handedly winning the match for England. The hosts were bundled out for a miserly 67 in reply to Australia’s first innings total of 179. Tim Paine’s men set up a strong target of 359, which needed England’s highest successful run-chase to win the game.

The left-handed batsman, who was the architect of England’s World Cup win last month, once again proved that he is one of the most impactful players around in world cricket.

The batting effort has earned him plenty of praise from cricketing circles. Let’s have a look at what is being said about him on social media:

What a privilege to witness the Greatest Test innings I have seen @benstokes38 … but more so what a Week for Test cricket … Australia take a bow for your role in an amazing Test Match … The Yorkshire crowd… https://t.co/R8usXikl0C

Well worth a watch as this was a very special day from a very special cricketer ! Congrats @benstokes38 awesome my friend ! #ashes 1-1 https://t.co/kRpyW6sLmB

What an Incredible innings @benstokes38 😍💪🏼 in #Ashes2019 at Leeds , Take a bow 🙇‍♂️ ✊ , This innings & Ur innings in #CWC19Final set the Standards to all Contemporary International Players to win High Voltage games for their respective countries

You cannot do that Ben Stokes …..

Not sure he can quite believe what he’s just done? @benstokes38 #Ashes 🏴󠁧󠁢󠁥󠁮󠁧󠁿🏏🔥 pic.twitter.com/R5Yi1Oi4Ri

Some cricketers are just born to create magic and drama! Stokes clearly headlines that act 👍.Also heard:Umpire Wilson was in demand in both dressing rooms albeit for diff reasons😜.The sooner the season gets over for some of the umpires, the better it is for everyone. Seriously.

That was pretty special! @benstokes38 , that was ridiculous! Well done. Ashes alive and well.

I’ve seen some remarkable cricket moments in my life but that is the best I’ve seen in over 50 years. @benstokes38 saved the Ashes and gave a magical inspirational innings. Even better than his World Cup performance.
Well done @ECB_cricket

What are your thoughts on his performance? Let us know in the comments section.