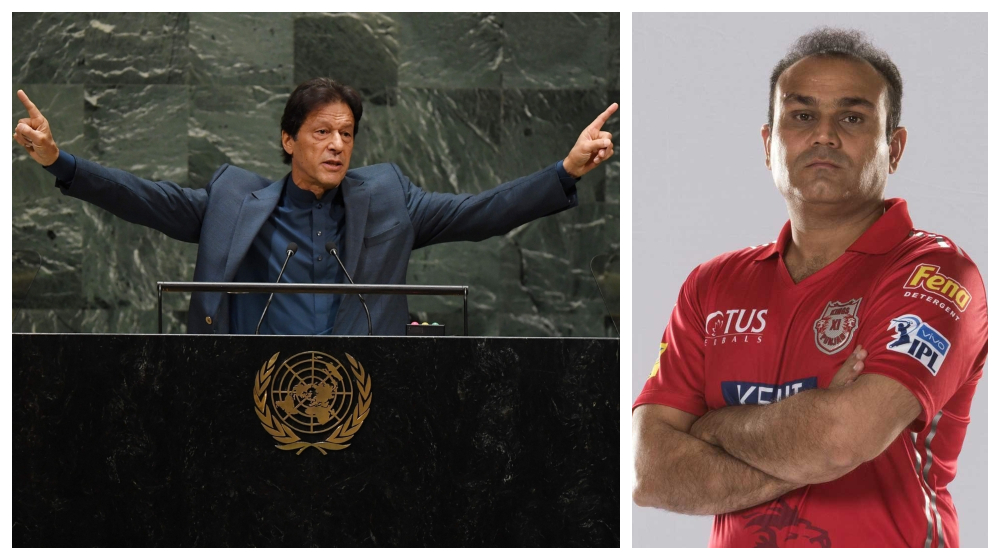 A wise man once said, “Grapes are sour”. You’ll understand why I wrote this at the top after going through the story.

Indian cricketers are making a habit of sticking their nose in things they can’t comprehend. We all know the mental sickness of former Indian opener, Gautam Gambhir, don’t we? His brawls with Shahid Afridi are known to all.

You sound like a welder from the Bronx, says the anchor.

His opening partner in playing days, Virender Sehwag has also started to follow him on their so-called nationalist agenda. The former Indian cricketer tweeted footage of Imran Khan’s interview with an American television network, MSNBC, saying:

After the pathetic speech in the UN a few days ago, this man seems to be inventing new ways to humiliate himself.

The anchor clearly said a “voter from the Bronx”, however, you hear what you want to. Isn’t it right?

Hear for yourself, here:

You sound like a welder from the Bronx, says the anchor.
After the pathetic speech in the UN a few days ago , this man seems to be inventing new ways to humiliate himself. pic.twitter.com/vOE4nWhKXI

The Indians, who couldn’t find many flaws in Khan’s historic UNGA speech, have had to stick to cheap tactics to malign the premier.

While the world is recognizing Khan as a Muslim leader, the Indians are busy finding sick ways of subduing their country’s humiliation at the world’s biggest forum.

Sane people also exist across the border, who corrected Sehwag immediately for his goofy remarks.

Clearly anchor says "voter" from the Bronx. But bhakti makes Sehwag change it to welder and create a story. https://t.co/K7CUzDnuJC

Even if he had said a welder, it wouldn’t have been as bad as a chaiwala, would it?

I find it rather funny that you’re ridiculing IK for supposedly “sounding like a welder” when your PM is literally a chaiwala. https://t.co/nKyb8TvFXp

This is a brilliant response.

To humiliate Sehwag and those who heard the word to be ‘welder’ instead of ‘voter’, the anchor Joe Scarborough has also clarified what he actually said:

What in the world are you even talking about? As I tweeted earlier, I said “voter” from the Bronx. https://t.co/SI1DAJZ90Q

What are your thoughts on Sehwag’s silly comments on Imran Khan? Let us know in the comments section.