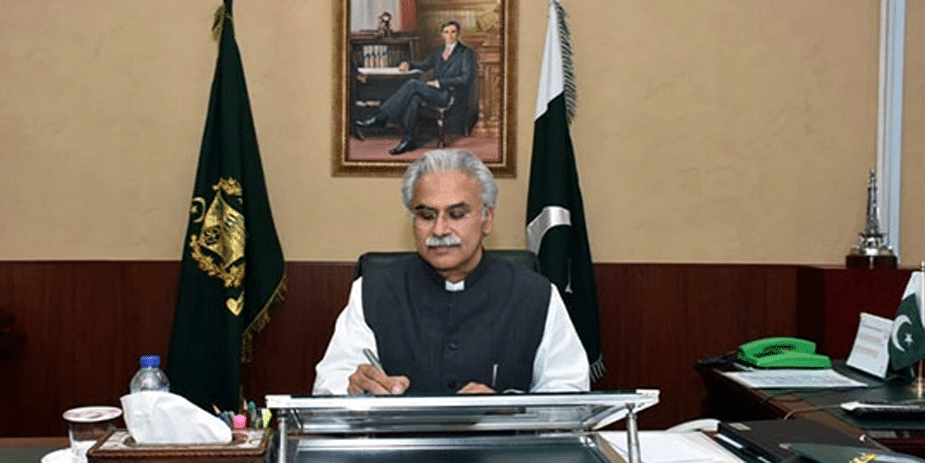 Chief Justice of Pakistan, Justice Gulzar Ahmed has asked the government to remove Special Advisor to the Prime Minister on Health, Dr. Zafar Mirza. He remarked this during the hearing of suo motu case on coronavirus pandemic.

Attorney General, Khalid Jawed Khan, requested the CJP to leave the matter to the government, adding that removing Dr. Zafar at this critical time would be catastrophic.

The Attorney General further said that changing the pilot mid-flight would be disastrous as the country is going through a health emergency.

A five-member larger bench of the top court, headed by Chief Justice of Pakistan (CJP), Justice Gulzar Ahmed was hearing the case.

172 different areas have been quarantined in KP. This comprises a total population of 224,276 people. 2359 houses, 16 villages and 2 UCs are under quarantine. Details of the areas can be found in the pictures below. #KPfightsCorona pic.twitter.com/BDRTdHZWhp

President of Provincial Doctors Association Dr Fazal Manan has claimed that nine doctors and seven nurses have contracted the coronavirus in Khyber Pakhtunkhwa.

Dr Manan has claimed that doctors are using N-95 for days rather than using it for one day. He added that doctors working in the OPDs are also working without protective equipment.

Govt working to bring back Pakistanis stranded in UAE

According to Pakistan’s ambassador to the United Arab Emirates, Ghulam Dastgir, the embassy is awaiting a decision from Islamabad regarding the repatriation flights for its citizens in the UAE.

The ambassador said that the government is making arrangements and setting up quarantine facilities for returning Pakistanis, after which it would begin the repatriation of its citizens.

Earlier, UAE had threatened to reevaluate its labor ties with nations failing to take back their citizens who have lost their jobs as a result of the COVID-19 pandemic.

We are tracking First Investigation Reports (FIRs) in police stations against those involved in #EhsaasEmergencyCash embezzlement and fraudulent deductions. I want stern action against such fraudsters. 2/3 pic.twitter.com/1MO2Y1G3hx

Authorities have sealed the ministries of Food Security, Housing and Overseas Pakistanis after an employee tested positive for the virus in the Pakistan Secretariat.

Earlier, Block B of the Pakistan Secretariat was emptied after an employee tested positive for coronavirus, said a notification issued on Monday. The secretariat serves as the headquarters for the cabinet and federal government.

1 more coronavirus death was reported in Punjab taking its toll to 24.

The province has also reported 62 new cases that take its tally to 2,656 so far.

Federal Minister for Science and Technology Fawad Chaudhry has said that 23 brands of hand sanitizers that are currently being sold in the market. are not in conformity with the WHO standards.

He took to twitter to provide a list of the non-compliant brands after PSQCA sample testing results.

Dear all! As per PSQCA sample testing following 23 brands of Sanitizers are not in comformity with WHO standards, we have advised health departments to remove these brands from stores. pic.twitter.com/Aj5gbSgIsD

Govt announces there will be no Ramzan bazaars this year

The Punjab government has reportedly decided against establishing Ramzan bazaars this time around due to the pandemic of coronavirus. Instead, the government is intending to give direct subsidy to the target masses on essential food items.

Last year, Prime Minister Imran Khan issued Rs. 2 billion in subsidies for Utility stores to offer edible items at reduced rates during the holy month of Ramzan. Another Rs. 3.5 billion package was announced to establish 16,000 Ramazan bazaars across the country.

However, despite such a massive support package, the government failed to control the profiteers, as they shortened the supply of basic items to sell them later at a higher cost.

Chief Justice of Pakistan, Justice Gulzar Ahmed has asked the government to remove Special Advisor to the Prime Minister on Health, Dr. Zafar Mirza. He remarked this during the hearing of suo motu case on coronavirus pandemic.

Attorney General, Khalid Jawed Khan, requested the CJP to leave the matter to the government, adding that removing Dr. Zafar at this critical time would be catastrophic.

The Attorney General further said that changing the pilot mid-flight would be disastrous as the country is going through a health emergency.

A five-member larger bench of the top court, headed by Chief Justice of Pakistan (CJP), Justice Gulzar Ahmed was hearing the case.

World Health Organisation (WHO) on Monday donated 15 testing machines and 15,000 testing kits to Pakistan to help the country in its fight against the virus,  reported Radio Pakistan.

WHO Representative in Pakistan Dr Palitha Gunarathna Mahipala, while addressing the handover ceremony, said that the world body has provided this equipment to support Pakistan’s efforts in preventing spread of  coronavirus.

NDMA Chairman Lieutenant General Muhammad Afzal said that there was no lack of Personal Protection Equipment in the country as we have achieved the capacity to fulfill country’s needs through local resources.

“At present we are not importing a single piece of PPE, except N-95 masks and all we are buying from the local market,” said Lt Gen Afzal.

1. Today, one of our most committed public health professionals, and part of our COVID19 response team, Dr. Ikramullah, Director Public Health KP has tested positive for Corona virus. I just talked to him. He is in high spirits, feeling good, and isolated at his home.

Finnish researchers have released a frightening simulation that demonstrates how droplets from cough and sneeze of Coronavirus patients can remain suspended in the air for several minutes and infect people before landing on the ground.

Experts at the VTT Technical Research Centre of Finland, Finnish Meteorological Institute, and Aalto University have studied how aerosolized particles released from the nose and mouth of a COVID-19 patient during cough and sneeze flow through the air.

When to especially wash your hands

Protect yourself & others from getting sick:

🧼 after coughing or sneezing
🧼 when caring for the sick
🧼 before, during & after you prepare food
🧼 before eating
🧼 after toilet use
🧼 when hands are visibly dirty
🧼 after handling animals or animal waste pic.twitter.com/bLi8ucvyPl

‘Ghosts’ scare Indonesians indoors and away from coronavirus

Kepuh village in Indonesia has been haunted by ghosts recently – mysterious white figures jumping out at unsuspecting passersby, then gliding off under a full-moon sky.

The village on Java island has deployed a cast of “ghosts” to patrol the streets, hoping that age-old superstition will keep people indoors and safely away from the coronavirus.

Known as “pocong”, the ghostly figures are typically wrapped in white shrouds with powdered faces and kohl-rimmed eyes. In Indonesian folklore they represent the trapped souls of the dead.

'Ghosts' scare Indonesians indoors and away from coronavirus https://t.co/WYPFuszEVe pic.twitter.com/dq99yYCRTG

Trump administration sees May 1 as potential date for easing restrictions

The Trump administration sees May 1 as a potential date for easing stay-at-home restrictions across the United States, but officials caution that it is too early to say whether that target would be met https://t.co/QVoEUBTGlk pic.twitter.com/peBMMREx0p

According to the police, nearly 6,000 people in Karachi have been arrested for violating the lockdown restrictions in the past four weeks.

As many as 580 arrests were made on Sunday while 1,885 cases have been registered against the violators so far.

Coronavirus: the world in numbers

Follow @Reuters liveblog for the latest developments around the coronavirus outbreak https://t.co/cEBwkoEQ5P pic.twitter.com/sHdyhNYMp1

While the world figures out how to tackle #COVID2019 , #ArtificialIntelligence is playing a key role in this fight.

Excited to announce @DigitalPak_GoP and @Love4Data , coming together to help make data-driven decisions during this fight.

Islamabad has reported 12 new Covid-19 cases, taking its tally to 131 so far.

As many as 67 recoveries were also recorded from different parts of Pakistan according to the government Covid-19 portal.

China on Monday reported 108 new cases of coronavirus infection, 98 of them imported.

Of the new domestic cases, seven were recorded in the province of Heilongjiang bordering on Russia and three in the southern business bub of Guangzhou.

Two more deaths were reported in the former epicenter city of Wuhan, bringing China’s totals since the illness emerged in December to 3,341 deaths among 82,160 official cases.

While the Coronavirus crisis is the only thing on our minds these days, the public remains shockingly unaware of the subject, relying more on hearsay, beliefs, and superstitions rather than actual medical knowledge.

This was exposed in a survey poll of 1000 Pakistanis by research company IPSOS in a study published on Thursday. The survey interviewed people from all over the country, including all provinces, regions and socioeconomic classes.

The poll revealed shocking misinformation on the virus and how to protect oneself from it: A staggering 82 percent of people believe that performing ablution five times a day can protect from Coronavirus.

As the federal and provincial governments are going to discuss possible extension of lockdown at a meeting of the National Coordination Committee, dozens of healthcare providers have been infected with novel coronavirus across the country.

The Pakistan Medical Association , a representative body of doctors, has blamed the low quality personal protective equipment for the tragedy.

However, Special Assistant to the Prime Minister on Health Dr Zafar Mirza on Sunday suggested to the healthcare providers to stop irrational use of the PPE.

Moreover, as many as 130 new cases were added to Punjab’s Covid-19 tally which now stands at 130. “Our Healthcare staff is dealing with this pandemic efficiently & IA we will be able to avert this crisis but with YOUR cooperation!,” said Punjab CM in a tweet.

Our Healthcare staff is dealing with this pandemic efficiently & IA we will be able to avert this crisis but with YOUR cooperation!

A friend and donor to President Donald Trump who the president had said was in a coma and seriously ill after becoming infected with the coronavirus has died.

Stanley I. Chera’s death Saturday was reported by The Real Deal, which covers the New York real estate industry. The publication cited unidentified sources who have worked with Crown Acquisitions, the firm Chera founded and ran. Chera was in his late 70s.

A White House official on Sunday confirmed Chera’s identity and ties to the president. The official spoke on the condition of anonymity to share details about Trump’s personal friendships.

Tenants can’t be forced out in Punjab for two months

According to a notification by the Punjab home dept., eviction of tenants because of nonpayment of rents or their delays has been banned in the province.

The ban has been imposed by Additional Home Secretary Momin Agha under Section 144 of the Code of Criminal Procedure and will remain in place for the next two months.

This takes the provincial tally to 744 and its death toll to 34 so far.

Italy recorded the lowest number of new coronavirus deaths in three weeks, saying 431 people died in the past day to bring its total to 19,899. It was the lowest day-to-day toll since March 19.

For the ninth day running, intensive care admissions were down and hospitalizations overall were down, relieving pressure on Italy’s over-stressed health care system.

More than 4,000 people tested positive as Italy began its fifth week under nationwide lockdown, continuing a general flattening in its infection curve.