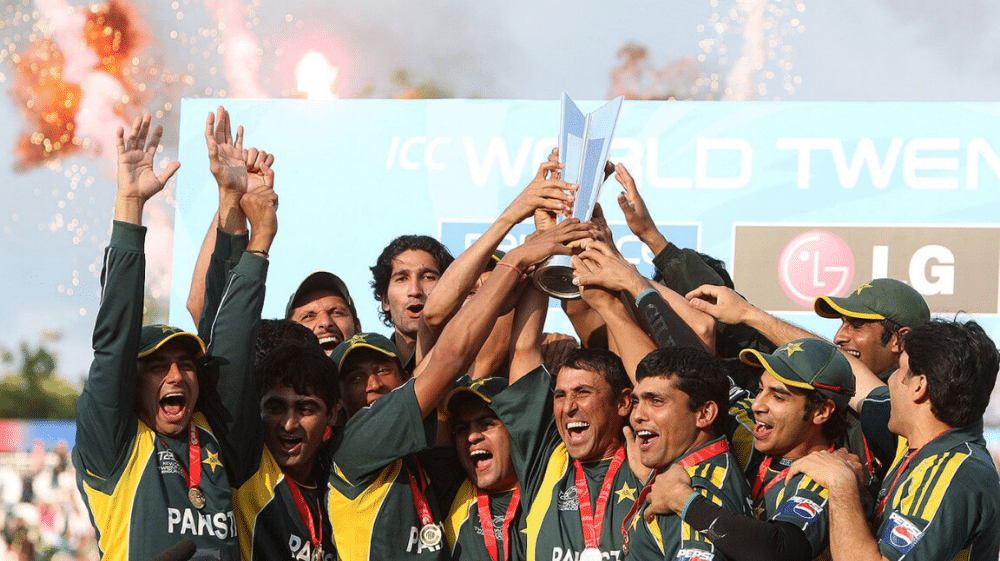 We’ve picked Pakistan’s greatest Test XI and ODI XI and now it’s time for Pakistan’s all-time T20I XI. Just like the West Indies, Pakistan and T20 cricket are made for each other and the Men in Green have proved it time and again with their brilliant performances.

The Green Shirts have had a lot of success in the T20 format including a World Cup title in 2009. Pakistan remained the world number 1 side for well over 2 years with 11 successive series wins.

Let’s have a look at the best eleven of Pakistan cricket in the shortest format. Only those players have been picked who have played at least 30 matches for Pakistan.

The best T20 batsman in the world walks into the opening slot. Need we say more about Babar Azam? The man oozes with class and has been racking up runs in T20 cricket for the past 2 years. He is the only player alongside Virat Kohli to average above 50 in the format and he can make it to any top T20 team.

Babar Azam’s batting partner is Ahmed Shehzad. The only batsman from Pakistan to hit a century in T20I, Ahmed Shehzad has a great record at the top of the order for Pakistan. He may have lost his place in the national side due to a poor run of form, but Shehzad’s record in T20’s speaks for itself.

Mohammad Hafeez comes in at number 3. He is the 2nd highest scorer for Pakistan in T20Is and his economical bowling spells make him an ideal player to have in the team. The spin trio of Hafeez, Saeed Ajmal and Shahid Afridi was one of the major reasons for Pakistan’s success in the T20I format in the early 2010s.

The highest scorer for Pakistan in the shortest format, Shoaib Malik, comes in at number 4. Malik has been a great servant for the Pakistan cricket team and the T20 format is where he has excelled the most. Under his captaincy, Pakistan made it to the final of the inaugural T20I World Cup in South Africa as well.

Pakistan won 11 consecutive T20 series under Sarfaraz’s captaincy, they were ranked as the world number one for over two years under his leadership. The reasons are clear and simple for his inclusion as the captain of this side. Apart from his leadership, he has been exceptional with the bat and gloves as well. Sarfaraz slots in at number 6.

Well, what can we say about Shahid Afridi that hasn’t been said a million times before? T20 format is absolutely tailor-made for Afridi. Pinch-hitter and a wicket-taker, Afridi comes in at number 7.

Abdul Razzaq didn’t have a long career as a T20 player, but he still made an impact. He played a huge part in Pakistan’s journey to becoming the world champions. He had lost almost all of his pace at that stage of his career, but made his experience count. He fills yet another all-rounder position in the line-up.

Umar Gul not only walks into Pakistan’s team but we’re pretty sure he can slot into any World XI as well. Umar Gul was the real deal when it came to fast bowling in T20 cricket. He picked up 5 wickets for 6 runs in 4 overs twice in his career. He was a match-winner and one of the best death overs specialists in the world.

Mohammad Amir will be the second fast bowler for this team. Mohammad Amir is another bowler that really excels in the shortest format of the game. He rarely gets hit for runs, has a great average and has that fear factor that the greats of the game possess.

Saeed Ajmal was hands down the best spinner of the T20 game. While teams preffered their fast bowlers to bowl in the death overs, Pakistan had Saeed Ajmal do that job, and he was pretty good at it. With an economy rate of 6.36 and an average of 17.83, Saeed Ajmal is our final pick for this team.

Do you want to make any changes to the XI? Let us know your thoughts in the comments section.