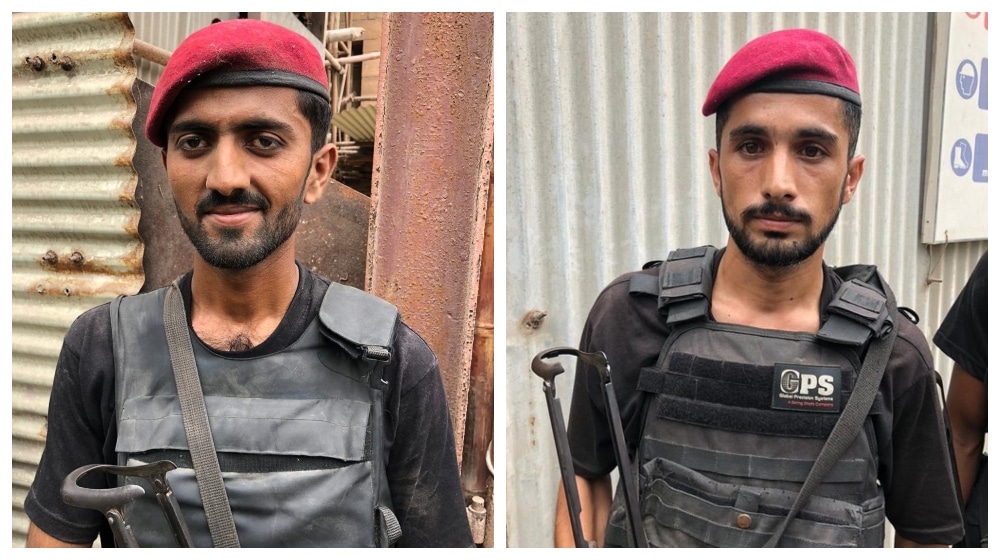 The Pakistan Stock Exchange terror incident earlier today was a failed attempt by the enemy to malign Pakistan. While everyone was busy praying for the safety of the people trapped inside the building in Karachi, the brave men of security forces were there to send those terrorists to hell.

Two such fearless faces were Constable Khalil and Constable Rafiq from Rapid Response Force Sindh Police who saved the lives of almost 2,000 people in the Pakistan Stock Exchange building. They made sure that the terrorists belonging to the Baloch Liberation Army (BLA) could not carry out their heinous terror operation inside the building.

BLA claimed the responsibility for the terror operation which killed a Policeman and two security guards with a few others injured.

All the 4 terrorists were eliminated in a little over 10 minutes as the security forces took control of the situation in a timely manner.

The pictures of the duo have gone viral on the social media for their heroic act and everyone’s praising their valor. Let’s have a look at what the people are saying about the brave Policemen who neutralized the operation:

Rafique & Khalil are enough for whole of R&AW. Failed their plan in 10 mins. #Karachistockexchange
Salute to the heros of Karachi. pic.twitter.com/3pBbKRxzSG

Salute to our heroes Abdul Khalil and Abdul Rafiq who bravely fought the terrorists today at Pakistan Stock Exchange, Karachi. May Allah bless you and others who were with you.#PakistanStockExchange pic.twitter.com/5CX1RyegEw

Salute to the heroics of Sindh Police constables Khalil and Rafiq who foiled the BLA terrorist attack on #KarachiStockExchange in just 8 mins. pic.twitter.com/Zt0Fj7gGu9

The resilience shown by Sindh Police is commendable.
Their quick response saved Pakistan from a big disaster. Hats off to constable Khalil and Constable Rafiq of RRF Sindh Police

My prayers for the martyrs. May Almighty give their families strength to deal with this loss. pic.twitter.com/lx6e7pUzji

Constable Rafiq and Constable Khalil are national heroes. Please share this post far and wide across Pakistan and urge the local, provincial and national governments to reward these brave warriors for saving many lives while risking their own.

Salute to our heroes! pic.twitter.com/5IOtIJU6Xq

Take a moment and appreciate constable Muhammad Rafiq and constable Khalil 👏 for shoting down the terrorist at Karachi Stock Exchange .
Thank you heros .
Your pride 🙌#KarachiStockExchange pic.twitter.com/Bauvsitq6I

#ShaabashSindhPolice
The brave Constable Khalil and Rafiq who saved so many lives today. pic.twitter.com/5p2r3G0MBA