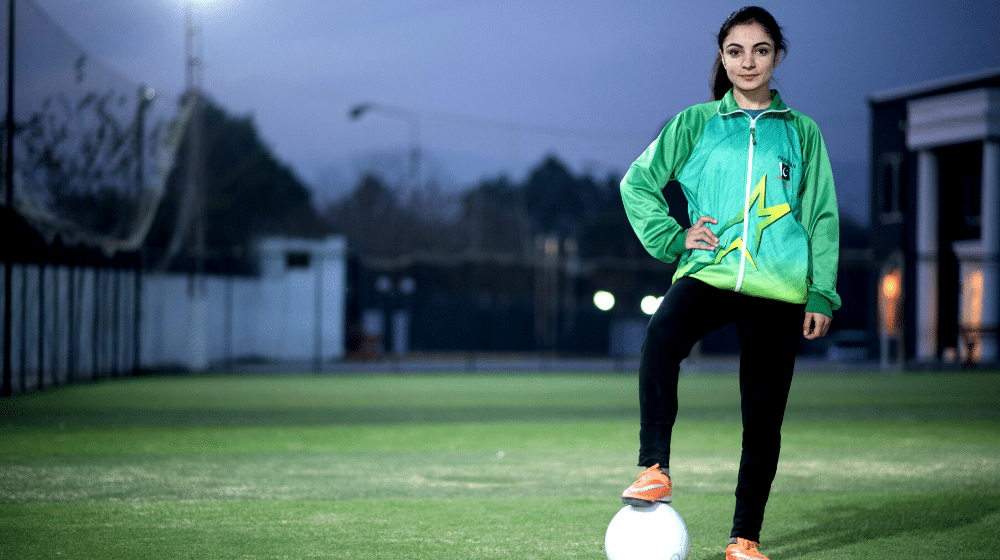 Karishma Ali, a 23-year old girl from Chitral, has been making her country proud. Last year, Karishma was named among ‘Forbes’ 30 under 30’ along with the likes of tennis star, Naomi Osaka, and renowned surfer, Owen Wright.

Karishma is the first girl from Chitral to have played football at the international level. She has represented Pakistan in the Jubilee Games in Dubai and her team was the first women’s team from Pakistan to take part in AFL International Cup.

Karishma currently is the president of the Chitral Women’s Sports Club, an academy she founded in her hometown. Having opened in 2018, the club now has over 60 members who are being trained in football and other sports. The aim of the academy is to encourage girls to step forward and take part in various sports.

Karishma did her higher studies in Islamabad, but due to the ongoing pandemic, she had to travel back to her hometown.

It has been a challenge for her to convince the girls in her hometown to take part in such activities. It hasn’t been an easy road for her to play football at the highest level as well. She received death threats from people in Chitral when they found out that Karishma was playing football in Islamabad.

But that didn’t deter her to pursue her ambition. She wants to bring change by encouraging women in her hometown to pursue their dreams.

Things are hard for girls here, especially to have a different dream or to do something outside of what society expects you to do.

Karishma fell in love with football back in 2006. Watching her first football match on television, she knew that’s what she wanted to do and her dad encouraged her to pursue her dream.

In 2016, she made history by becoming the first female footballer from Chitral to represent Pakistan national team. However, she received multiple threats online and wanted to end her dream of playing football. But, her father gave her the strength to continue.

I received messages saying ‘if you continue to do this, we will kill you when you come back, or your legs should be chopped off’ … I was only 18 years old and thought maybe I should stop.

But she has gone from strength to strength, excelling, and helping other women to move forward as well.

Apart from her love for football, Karishma has also founded Chitral Women’s Handicrafts Center. Due to her exploits in the field, she met with the Duke and Duchess of Cambridge when they visited Pakistan last year.

She also took part in the prestigious Milan Fashion Week where she walked with renowned fashion designer, Stella Jean.

This Kid Just Inspired Pro Footballers With His Love for Football

Karishma has been involved in a lot of philanthropic activities during the ongoing Covid-19 pandemic. Till August, she has been able to supply ration for over 300 families and has donated 155 N95 masks, 53 goggles, 250 PPE suits, 650 surgical masks, 400 pairs of surgical gloves, and 76 face shields to the DHQ Hospital Chitral.

I want to see more women in leadership positions and then sit back and enjoy. This is what I wanted to fight for.

Karishma says that her ambitions don’t end here. She wants more women from Chitral and all over the country to come forward and fulfill their dreams. She wants to see a world where women don’t have to worry about customs and do whatever they want.