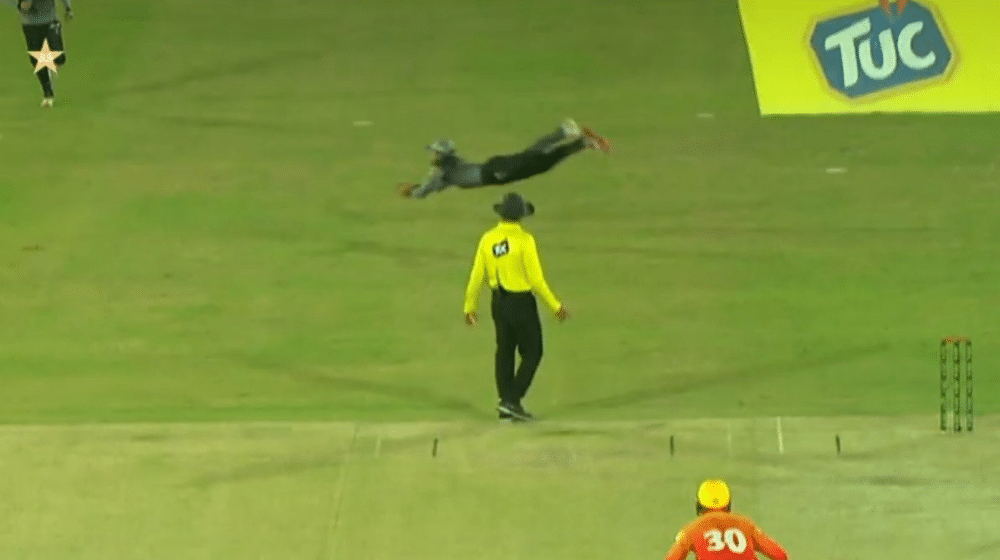 Pakistanis are usually not very good when it comes to fielding. It has been a major weakness in the Pakistan side for a number of years. There are always one or two brilliant fielders in the team, however, we are yet to see a strong fielding unit of Pakistan.

The likes of Imran Nazir, Fawad Alam and Shadab Khan have been changing perceptions about Pakistan cricket, but one single man can’t change the fielding culture.

Recently though, there has been a lot of focus on the fitness, Pakistan head-coach, Misbah-ul-Haq, has already warned the players to get in shape or they won’t be a part of the team. So, the culture is changing and thus Pakistan’s fielding standards have improved a lot in recent times.

In the ongoing National T20 Cup, fielding has been a major cause of concern. Experts have criticized the players for their poor fielding. But in yesterday’s match between KP and Sindh, Mohammad Rizwan took the catch of the tournament, or perhaps the greatest catch in Pakistan’s history.

Rizwan has quite often displayed his fielding skills, however, this time he took an absolute blinder. He was stationed at the cover position and ran around 45 meters to take the catch.

If you have missed it, you are in for a treat. Watch the video below:

What a grab this was by Mohammad Rizwan! 🤯 pic.twitter.com/lbDQdql3Ko

This is the standard of cricket that will get the world to notice Pakistan’s domestic cricket. The standard has been generally quite good in the National T20 Cup. From brilliant batting displays by the likes of Babar Azam, Khushdil Shah, Abdullah Shafique and Imam-ul-Haq to fascinating bowling spells by Shaheen Afridi, Haris Rauf and Faheem Ashraf, the standard has improved quite a lot.

Extra-ordinary moments such as Rizwan’s grab are getting the attention Pakistan domestic cricket deserves. Even though IPL is going on, the National T20 Cup has been making the headlines as well.