The current account maintained a surplus in the third straight month with a huge surplus of $792 million during the first quarter of the current financial year 2020-21 mainly on the healthy inflows of remittances and control over import bill.

According to the State Bank of Pakistan, this is the first quarterly surplus in more than five years.

This is indeed a record that the current account retained its surplus-value for a quarter of the financial year.

The surplus is backed by supernormal growth in remittances, which would moderate. The import bill ought to increase due to monetary easing led demand & energy imports. Exports growth is not so impressive. That needs to go touch double digits. 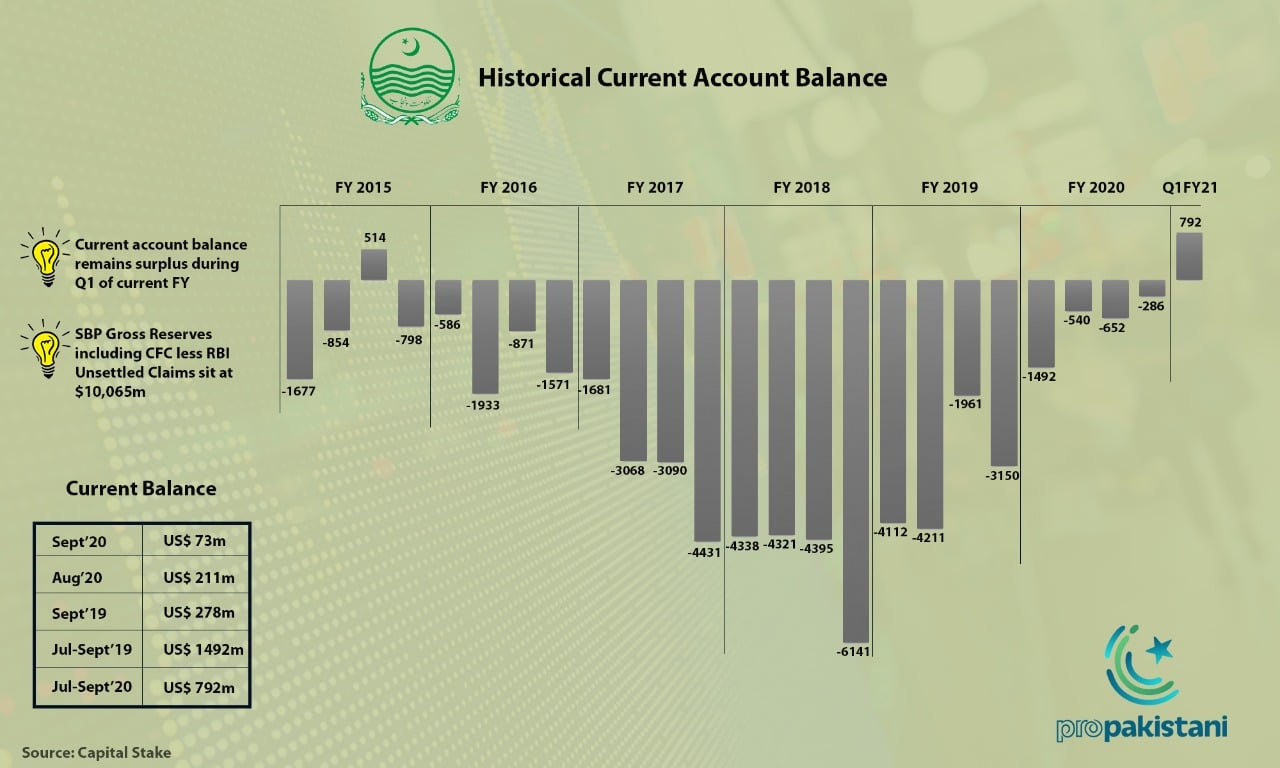 The import of goods reduced to $10.6 billion from $11.03 billion and the import of services also decreased to $1.76 billion from $2.39 billion by the end of the first quarter of FY21. The reduction of imports bill also supported the balance of payment of the country to contain the deficit position.

Meanwhile, the export of goods stood at $5.35 billion versus $5.98 billion last year, and services stood at $1.22 billion compared to $1.29 billion. The exports declined on a year-o-year basis however they slightly picked up on a month-to-month basis as the economic activities are being restored globally and locally.

Remittance inflows, on the other hand, reached an all-time high level of $7.14 billion in the said period showing a year-on-year growth of 31%, which ultimately turned the current account into surplus.

Prime Minister Imran Khan on Wednesday said that Pakistan is headed in the right direction finally as the current account was in surplus of $73 million in September.

The premier took to Twitter and said the surplus for the first quarter was brought to $792 million as compared to the deficit of $1,492 million during the same time last year.

Great news for Pakistan. We are headed in right direction finally. Current Account was in surplus of $73 mn during Sept, bringing surplus for 1st qtr to $792 mn compared to deficit of $1,492 mn during same time last yr. Exports grew 29% & remittances grew 9% over previous month.

It is expected that imports and exports of goods and services may witness a gradual growth in months to come through as the government should focus to contain the import bill and enhance exports along with remittances to maintain the positive trend of current account surplus, which is indeed a herculean task.

Due to the huge value of surplus, it is likely the current account will remain in surplus for the next couple of months whereas on a month-to-month basis it may go into deficit.