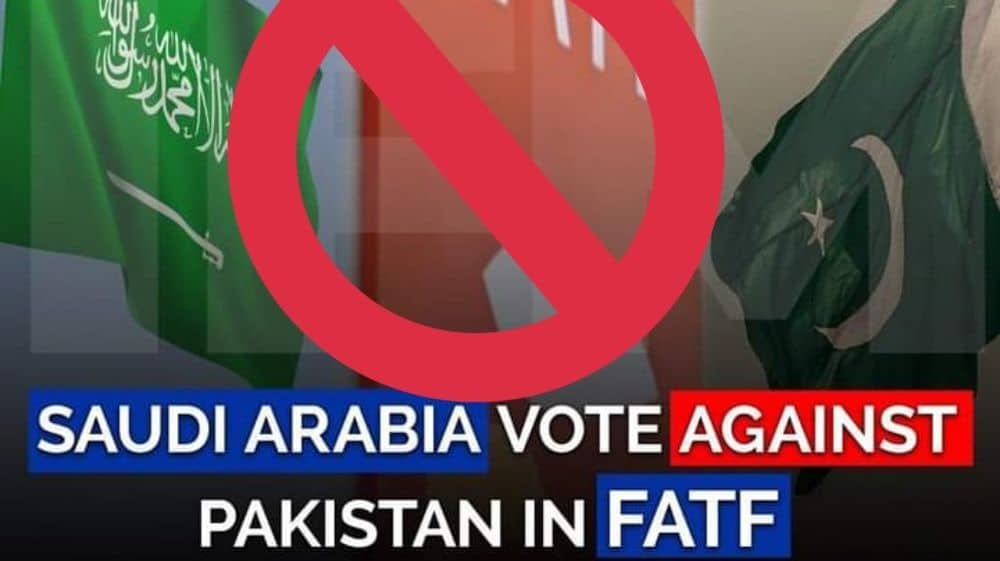 A renowned journalist, Sabir Shakir, has claimed that Saudi Arabia has voted against Pakistan in the virtual plenary of the Financial Action Task Force (FATF).

He also asserted that Saudi Arabia lobbied to woo the support of other Muslim countries including Turkey to move Pakistan into the blacklist of the global financial watchdog.

There are rumours on social media that Saudi Arabia is going to vote against Pakistan at the FATF. Their source is ARY's Sabir Shakir, who has claimed that not only a "friendly, brotherly" country had voted against Pakistan but it had asked Turkey to do so as well pic.twitter.com/qec7LElZtU

However, the claim has turned out to be spurious as Azhar Mashwani, Focal Person on Digital Media to CM Punjab, has pointed out.

Taking to Twitter, Mashwani termed the claim made by Sabir Shakir as fake, adding that the Ministry of Foreign Affairs will shortly issue a statement over the fake news.

Reportedly, Ministry of Foreign Affairs will issue statement on this Fake News. pic.twitter.com/8PcZCr8HaQ

Although the virtual plenary of FATF is being held from 21 to 23 October, FATF will decide whether to remove Pakistan from its ‘grey list’ or move it to its ‘blacklist’ on the last day of the session.

In June 2018, the FATF had placed Pakistan on its grey list due to strategic shortcomings in its anti-money laundering and terror financing (ML&TF) regime after strong lobbying from India supported by the US, the UK, and the European Union (EU).

Moreover, it also gave a four-month grace (March-June) period to Pakistan to completely implement its 27-point ML&TF action plan, noting that the country had achieved only 14 targets.

The FATF session was originally scheduled in June. However, the Paris-based agency had decided to postpone all evaluations and follow-up deadlines as a result of the COVID-19 pandemic, thus giving additional four months (July-October) to Pakistan to complete the MT&TF action plan.

Punjab Bans Sale of Sugar for Commercial Use

By September, the federal government had amended 15 laws to reconcile Pakistan’s legal system with international standards as required by the FATF.

Earlier this month, the federal government furnished the compliance report on the 13 outstanding action points to FATF, which will be reviewed on the last- 23 October- of virtual plenary.

The spokesperson for Foreign Office, Zahid Hafeez Chaudhri, has categorically denounced media reports which suggested that Saudi Arabia has voted against Pakistan in the FATF plenary.

While terming the story as false and baseless, the spokesperson said that Pakistan values its relationship with Saudi Arabia and strongly rejects such malicious propaganda against a brotherly nation.

Pakistan and Saudi Arabia enjoy strong fraternal ties and the two countries have always cooperated with each other on all matters of bilateral, regional, and international importance.