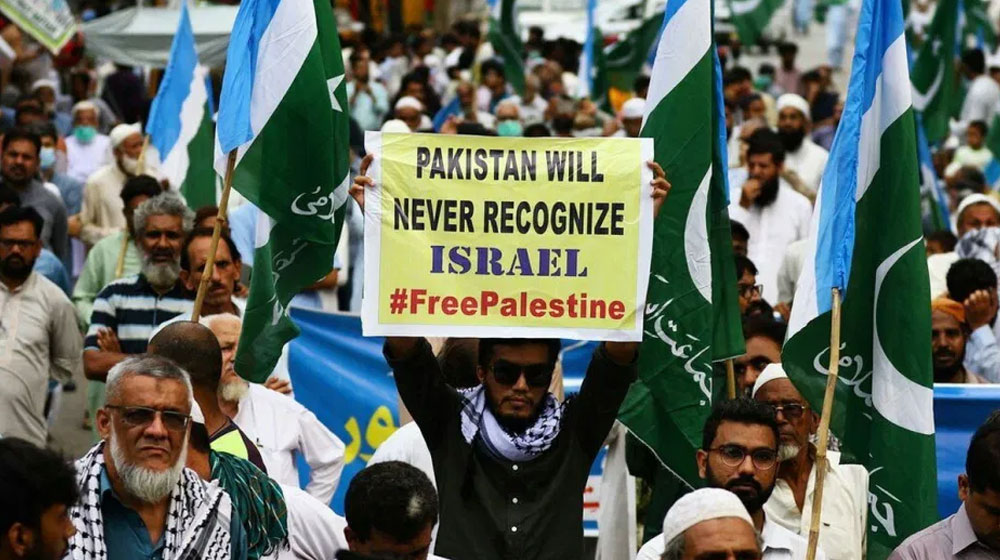 In line with Prime Minister Imran Khan’s stance, Pakistani Twitter users have rejected the idea of Pakistan opening ‘channels of communication’ with Israel, as the hashtag #PakistanReject_Israel became the top trend on Twitter on Thursday.

Pakistan is currently one of the few nations that do not recognize Israel. Pakistan has been a staunch supporter of the rights of Palestinians.

Though Prime Minister Khan has categorically rejected the idea of normalizing ties with the Jewish country, a faction of media continues to raise the issue to cause a stir.

The latest episode started earlier this week when a renowned Pakistan journalist, Mubasher Luqman, appeared on an Israeli TV channel and supported the idea of normalization between Pakistan and Israel. He also praised Israel as a nation and said it was a reality, not a dream anymore.

Luqman’s statement was followed by a tweet from another pro-government journalist Kamran Khan tweet, who first broke the news of the meeting between Saudi Crown Prince and Israeli Prime Minister and then called for Pakistan’s policy shift towards Israel.

Message for we Pakistanis from the Custodians of the Holy Mosques and other brothers in the Arab world. “Nations don’t have permanent friends or enemies, only interests”. Why is Pakistan shy of exercising its options?

University of Health Sciences Postpones All Exams Due to COVID-19

The developments over the week renewed the discussion of whether Pakistan was reconsidering its policy for Israel. However, the Foreign Office moved quickly to rubbish the notion on Wednesday. FO spokesperson, Zahid Hafeez Chaudhri, ‘categorically rejected baseless speculation regarding the possibility of recognition of the State of Israel by Pakistan.’

The decision is in line with the public sentiments who see Israel as an illegitimate state that has been established on occupied lands of Palestinians. It was evident on Twitter where people hailed PM Khan as a hero for not succumbing to international pressure to recognize Israel.

Here is how people reacted to Khan’s decision in this regard:

We (🇵🇰) can never accept a country which is based on the occupied lands of Palestine . Give them their rights and then call yourself a well desciplined state 🇮🇱 . you are a dancing doll connected with ropes . You are being used by the hands of your owner . #PakistanReject_Israel

"Israel is illegitimate child of west, we will never recognize it."
*MUHAMMAD ALI JINNAH*

*We will not Recognize Israel, that's it.*
PM *IMRAN AHMAD KHAN NIAZI*#imrankhanPTI#PakistanReject_Israel pic.twitter.com/qS6tDum0VG

Pakistan is not the weakest nation like Arabs to recognise Israel. We are committed with our stance.#PakistanReject_Israel

We cannot let our names represent an apartheid regime and ethnic cleansing of Palestine. We should push for peace in one of the most complex conflicts of our time, and simultaneously hold Israel accountable for its actions.
#PakistanReject_Israel https://t.co/k40TQ1OixH

#PakistanReject_Israel
PMIK must engage Palestinian as well as Israeli leadership to agree & implement a just solution for Palestine State as per the UN Resolution.
Its a lifetime opportunity as the whole World is desperate. Only Pakistan could provide security to Hijaz❤️🙏 pic.twitter.com/0tNHNBRL5u

If we retreat from the issue of Palestine, So how can we talk about Kashmir's rights?Israel is oppressing Palestine and India is on Kashmir, We will always be the support of the oppressed, We have a right over Bayt-Ul-Muqadas we will free it from the jews!#PakistanRejectsIsrael pic.twitter.com/Lql9zrckzX

What are your thoughts on the subject? Let us know in the comments section.