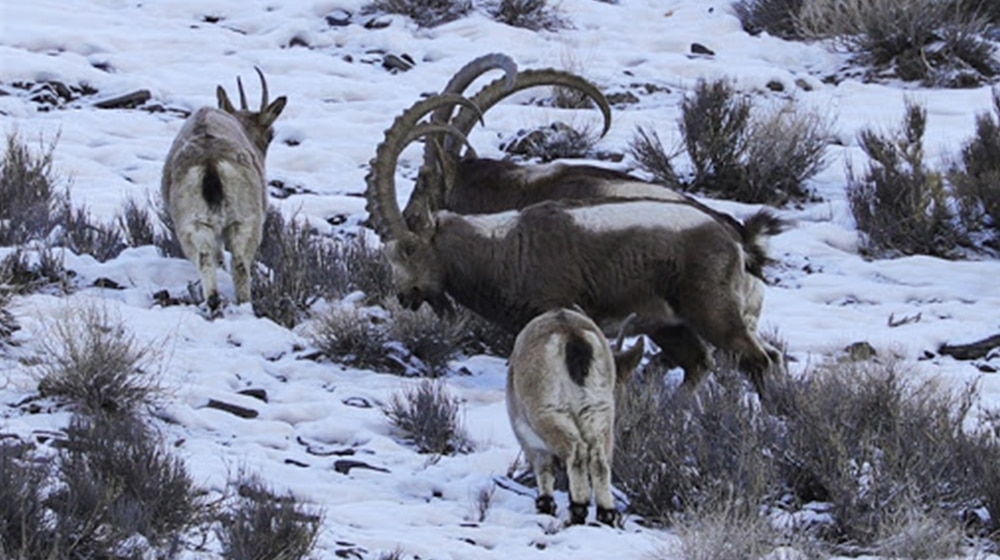 In exclusive footage, captured by the World Wildlife Fund (WWF-Pakistan), 50 Himalayan ibex were spotted grazing along the massive Passu Glacier in Hunza Valley.

Considered an indigenous species to Pakistan’s dominant Hindukush and Karakoram ranges, the WWF-P observed the animals in their most natural and vulnerable habitat.

Recording such a rarity in modern times is a remarkable feat, as it hints at a healthy ecosystem capable of supporting rare predators such as snow leopards, lynxes, and wolves.

The WWF-P team comprised Wildlife Filmmaker, Nyal Mueenuddin, and a local photographer, Imtiaz Ahmed, among other researchers and geologists.

Whilst trekking along the snowy terrains of the valley, the team came across ibex tracks parallel to the mountain ridges. Scaling a ridge nearby, the team spotted a herd of at least 50 Himalayan ibex, who had come down from as high as 5,000m in search of food.

In a statement, the local photographer, Imtiaz Ahmed, was of the view that,

When it comes to filming wildlife, being patient is of paramount importance, and one should not get discouraged by harsh weather conditions or difficult terrain.

It is because we had the patience that we were lucky enough to film this rare sight. My message is that we should do as much as we can to protect the beautiful wildlife in these areas so that our next generation can witness and experience their existence. My hope is that through my pictures and footage, I can raise awareness among the public about animals that inhabit our northern areas. It is time for us to be one with nature and do what we can to protect it.

WWF initiated its conservation efforts in Pakistan from this region of Gilgit-Baltistan, which included helping establish Community-Based Organizations (CBOs), raising awareness, and educating locals about the importance of wildlife in maintaining the ecosystem’s balance.

He commended the work of his colleagues, adding that “after more than three decades, we can report that the population of ibex is increasing. The sighting of such a large herd is a welcome indicator of the conservation success of WWF in its fiftieth year in Pakistan.”

The WWF had previously initiated a research-based project in 1990 to protect the Himalayan ibex, its associated species, and of course, their habitat. Initially, the project was centered across the Balti plateau, which was later expanded to Bar Valley and Nagar district with assistance from the Aga Khan Rural Support Programme (AKRSP).

The GB communities in the area made a pact with Wildlife Department (GBFWED), in which both parties mutually agreed to protect their natural resources, particularly the ibex population.

As the footage shows, the initiatives of the past three decades have helped yield positive results. At present, countless intervention schematics are underway to not only change the human attitude towards wildlife protection but also to reduce any unwanted wildlife conflicts.

Similar to other rare species that are currently a part of the global ecosystem, the ibex population faces existential threats across its natural habitat in Pakistan. Some of these threats have been categorized as habitat loss, illegal hunting, poaching, climate change, and lack of awareness among people.

The local community of the Gilgit Baltistan area, community wildlife guards, and the GB Wildlife Department have taken tremendous steps to protect wild animals, particularly the Himalayan ibex. Although these threats remain at large in recurring phases of human-to-animal interactions, the ibex population looks to be increasing in most cases.