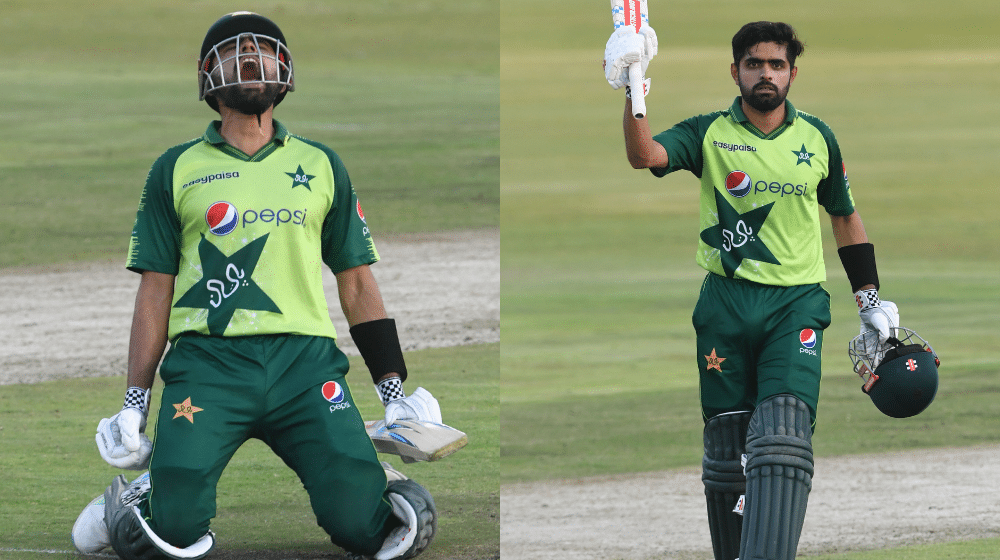 Pakistan captain, Babar Azam, scored his first T20I century of his career, helping Pakistan to a comfortable nine-wicket victory in the third T20I against South Africa. Babar’s class was on full display as he took down the South African bowling attack, scoring 122 off 59 balls, registering the highest individual score by a Pakistani in T20Is.

This was also the highest individual score in a run chase in the world.

Babar’s century came off 49 balls, the fastest by a Pakistani batsman. He also became only the third Pakistani batsman to score centuries in all three formats after Ahmed Shehzad and Mohammad Rizwan.

Babar has also scored the most runs in the first 48 innings in T20I cricket. He has scored 1,916 runs, surpassing Kohli, who had scored 1,852 at the same stage of his career.

Babar has also scored the most centuries in T20 cricket since 2019, having scored 5 centuries over the past two years. English middle-order batsman, Dawid Malan, is next on the list with 3 T20 centuries.

Babar was ably supported by the wicket-keeper batsman, Mohammad Rizwan. Both the batsmen put on a clinical partnership of 197, which is the highest partnership for Pakistan in T20Is. The previous best was Mohammad Hafeez and Ahmed Shehzad with a partnership of 143* against Zimbabwe.

Babar and Rizwan’s opening partnership was also the highest by any team in a run chase. This was also the fourth highest partnership overall. Afghanistan pair, Hazratullah Zazai and Usman Ghani hold the record with a stand of 236 against Ireland.

Pakistan managed to chase down a mammoth target of 204 comfortably with two overs to spare and nine wickets in hand. This was Pakistan’s highest successful run chase in T20I history and Pakistan became the first country in the world to chase down a target in excess of 200 with only one wicket lost.

Earlier in the day, Babar was announced as the number one ODI batsman in the world, ending Kohli’s four-year reign at the top of the charts.