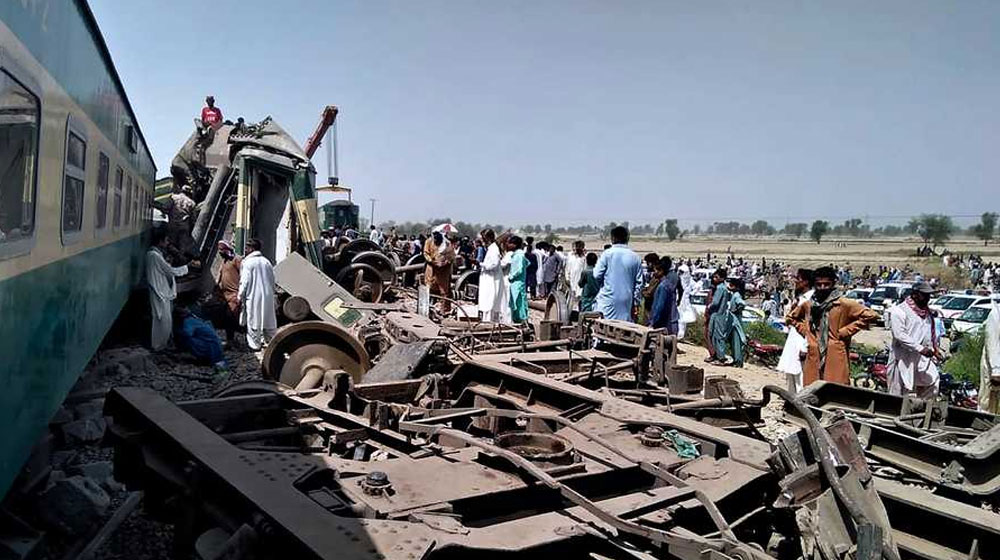 At least 31 people have lost their lives while more than a hundred have been injured in an accident involving two passenger trains near Ghotki in upper Sindh.

The spokesperson for Pakistan Railways said on Monday that the accident had occurred around 4 AM after the Millat Express train travelling from Karachi to Sargodha got derailed and fell across the ‘down track’. Consequently, it had collided with the Sir Syed Express coming from Rawalpindi.

The incident occurred near the Raiti Railway Station in Dharki, a city of Ghotki district.

A statement issued in this regard read:

“The Millat Express train left Dharki station at 03:28 AM. Information was received at 03:43 AM that the train had derailed at 03:38 AM. Meanwhile, the Sir Syed Express train passed through Raiti at 03:38 AM. As the coaches of the derailed train were infringing the down track, the driver tried to apply emergency brakes but the locomotive hit the infringing coaches at 03:38 AM”.

Govt to Promote Students of Grade 1-7 Without Exams

According to the statement, the accident had caused six coaches of the Millat Express to derail and five to overturn. Two coaches of the Sir Syed Express train were also derailed and three had overturned, leaving 31 people dead and over 100 injured.

A relief train had arrived from Rohri while PR officials, along with the police and the local administration, have been carrying out rescue efforts. He said that helpline centers have been set up for passengers in Karachi, Sukkur, Faisalabad, and Rawalpindi.

The incident has paralyzed the railway traffic across the country due to the non-availability of the track. The PR spokesperson said that the traffic will be restored when the tracks are cleared.