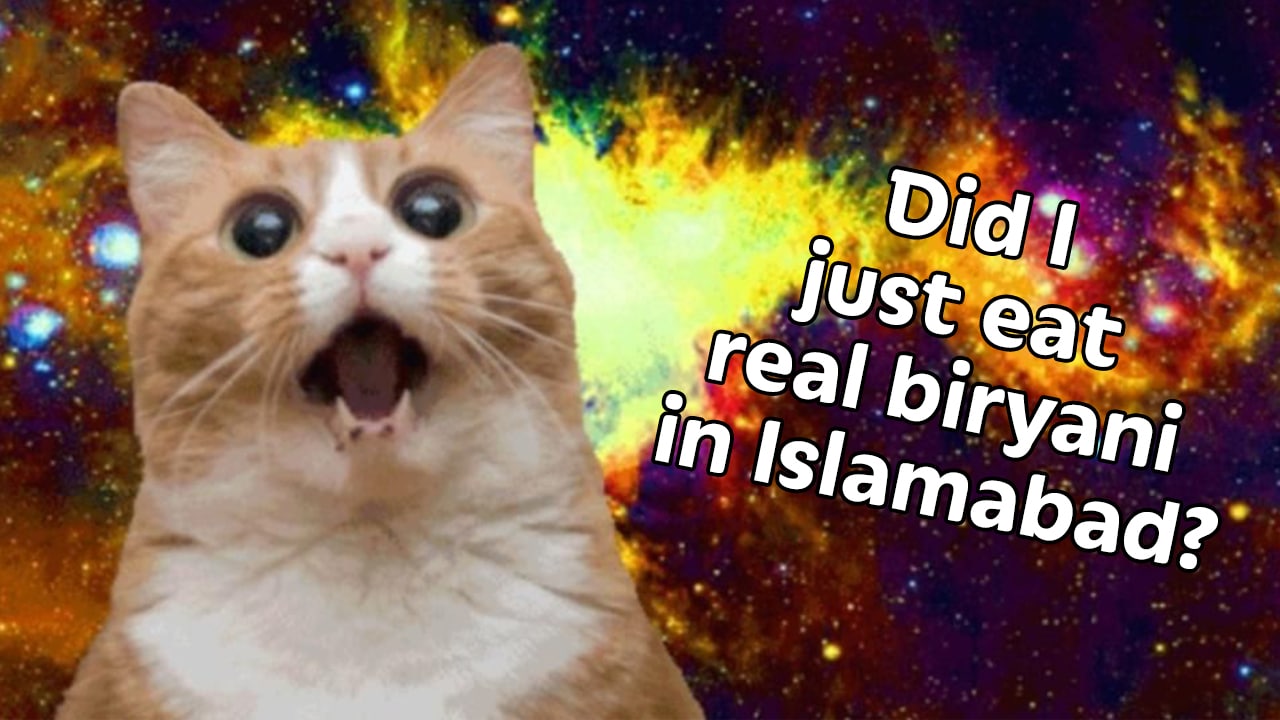 My quest for biryani in Islamabad spans four long years. Ever since I moved from Karachi – the undisputed biryani (and maybe all food) capital of Pakistan – to the capital city, I’ve tried out nearly all hyped biryani places.

If I could put all these experiences into one word without being vague, it would be ‘bad’. Some were underwhelming, some were barely passable based on my acute biryani craving, and many others were beyond awful.

But before I reveal my new biryani find that you must also try, I want to walk you through my long journey of disappointment.

It’s not that I wasn’t aware of the type of biryani usually served in Islamabad, or the whole of Punjab for that matter. But I was still excited when I decided to give it a try at my office mess. It was a mess.

Rice was served first. Tinted yellow and boiled with some garam masala. Big chunks of potato, obviously colored mustard. And after a while, some kind of fried chicken arrived that was put on top of the rice.

The tong that put the meat on rice worked like a magic wand. What was just yellow and orange rice was now biryani! I’d leave how it tasted to your imagination.

Everybody is selling ‘Karachi biryani’

The ‘Karachi’ biryani is yet another food trend like the countless Shinwaris; everybody is claiming to be selling the real Karachi biryani.

Two of them include Karachi Biryani (E-11/2 Marakaz) and the Karachi Naseeb Biryani chain of restaurants, which I’m not sure are even connected to each other.

The pattern and taste are the same. It’s like they share the misguided ‘authentic’ recipe: the overwhelming smell of star anise (badiyan) spice; hyper-yellowed rice, potatoes, and chicken; and loads of oil and garam masala. Hardly anyone uses basmati rice as cooking with sela is probably easier and less tricky.

Shandez (E-11) was an appalling experience

My hopes were high when I saw their promotions. They were claiming ‘real Karachi taste’ and were running an aggressive lunch campaign selling a single plate for just Rs 150. Even more exciting was the rare option of beef biryani (I don’t understand why more restaurants sell that) that’s available on Fridays and Saturdays. 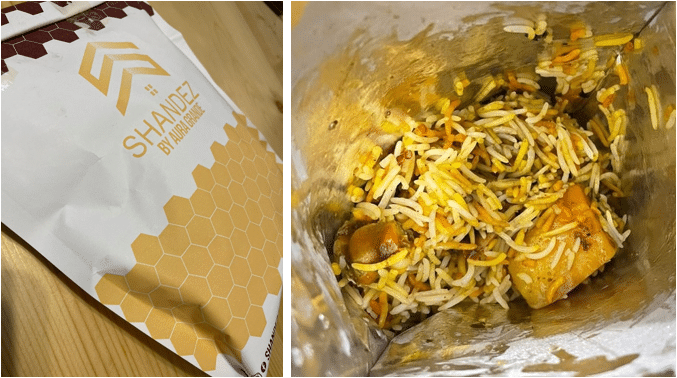 I excitedly waited for three days for Friday to come and try out their beef biryani. I ordered two. And all hopes were already dead when I opened the package. The same sweeping smell of spices, yellow and black layers of food color and garam masala sprinkle respectively, and oil that was dripping even from the top layer of rice.

And that was after my request for ‘mild’ serving.

Why, I asked myself, do they have to overdo such a simple dish? Why make it so bad that it gives diners instant heartburn and queasy stomach? Shandez biryani was absolute torture to my entire digestive system, end to end.

Don’t be fooled by the fancy name or the clay pot the biryani comes in. I’d give the presentation probably 9/10 until the aluminum foil is removed and the spoon is dug in. Then, it’s the usual 2/10. 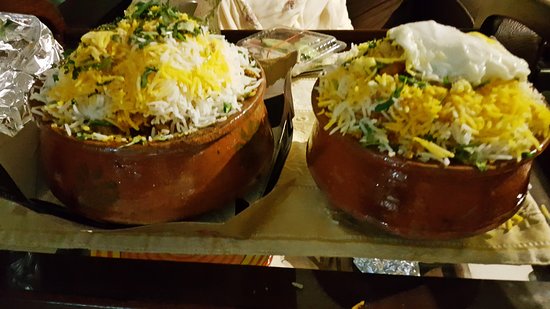 Below the beautiful layer of yellow/white rice and some needless coriander garnish, it’s the same story all over again. The smell of aniseed (oh, the obsession!) floods in. And when you dig in, layers of spices quickly bring the anticlimax. And the overuse of oil just makes it more appalling. Overall, it’s a bad overkill of the beloved dish.

One of the passable biryani options that I found in Islamabad included Sarang Sindhi Cuisine in F-11 Markaz. Although all their food is good, biryani is more popular. Still, it’s on the spicier side and doesn’t really carry the taste that I had been craving for a long while. 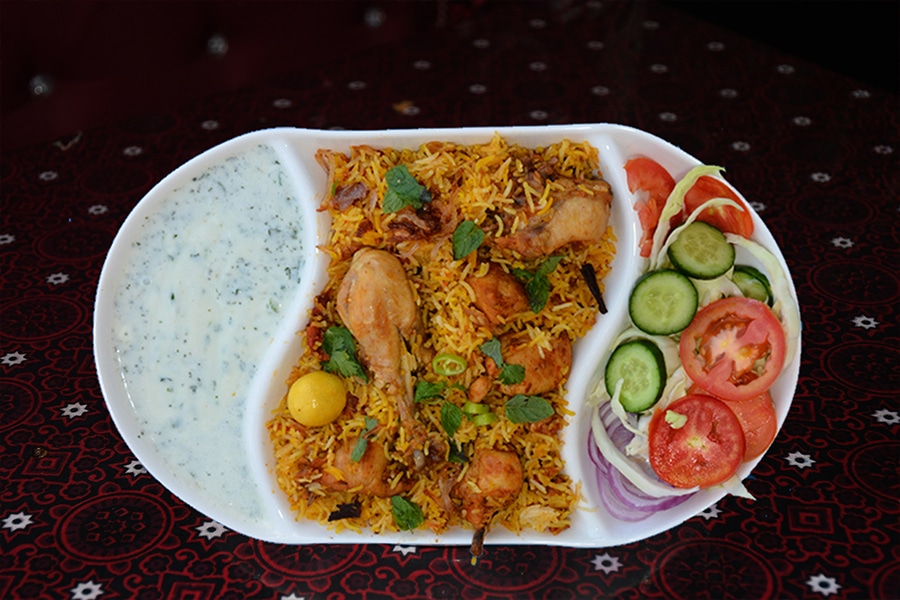 But, it’s miles ahead when you compare it to the rest of the gut-wrenching (literally) options that we’ve discussed above. If you want the real taste of biryani, Sarang will deliver something close. It’s recommended only if you can bear that extra kick of the spices.

And just before I had lost all hope for some good biryani and instead stick to the homemade option, I was enticed to try just one more. This time from Adan’s Café (PWD).

The perfect biryani in Islamabad, hands down!

I saw Adan Cafe‘s ad on Facebook. It said ‘Genuine Taste of Karachi’. I scoffed, naturally, after going from bad to worse in my previous experiences. But the menu was simple and tempting: Chicken Biryani, Beef Biryani, Beef Pulao, Beef Nalli Biryani, and Beef Nihari. 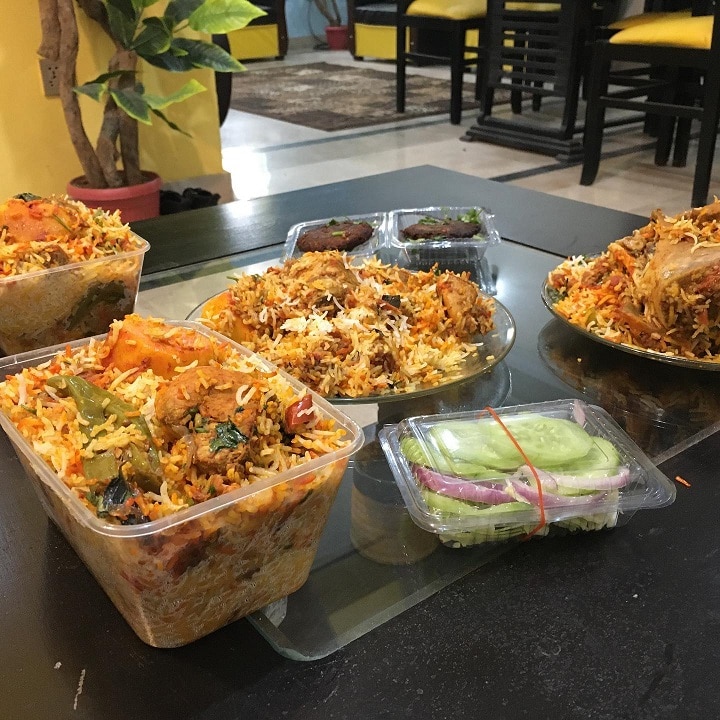 I couldn’t resist and ordered one chicken and one beef briyani deals. It was expensive and was far away from where I lived. And since they didn’t have their own delivery, third-party delivery charges were hefty too, adding to the already fat bill.

But I pre-ordered anyhow for the next day (since they had wrapped up the kitchen for the day and needed at least an hour of prep time).

The food was delivered the next afternoon at the set time. I didn’t have much hope, but the excitement did exist. And the moment I lifted the lid off the container, I knew this was a game-changer.

The first bite confirmed it. It was the best biryani I had had in Islamabad so far. And the ‘real’ one. No overwhelming taste or smell. The perfect blend and balance of spices and ingredients. The right color. And good serving size too. 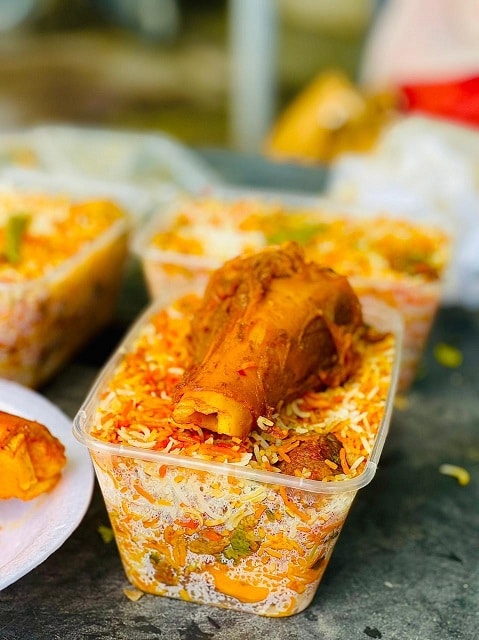 I congratulate the Adan Café team for delivering on their promise. The shami kebab that was part of the deal was also authentic. Even sides like raita and salad were fresh and neat. It was the right deal.

If you’re also looking for a well-balanced plate of biryani, Adan’s Café is a big recommendation. And if you too, like many other Islooites, have (unfortunately) developed a taste for the ‘chicken over rice’ biryani and want to try what the real one tastes like, Adan’s is just the right option.