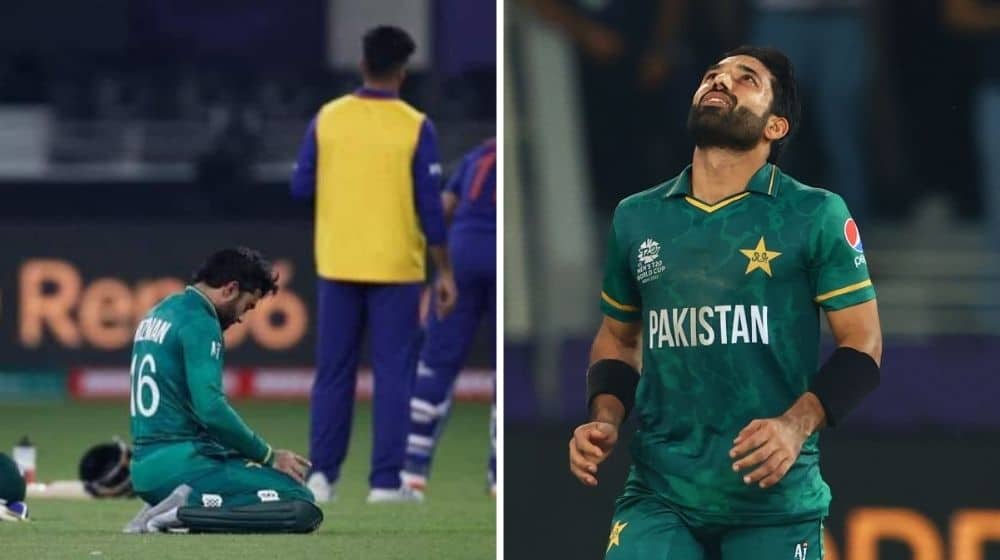 Pakistan’s wicket-keeper batter, Mohammad Rizwan’s exceptional knock helped Pakistan to a historic win over their arch-rivals India in their opening encounter of the 2021 T20 World Cup. Rizwan’s magnificent innings of 79 runs off 55 balls showcased his class, temperament, and grit that the Pakistani fans have become accustomed to of late.

Mohammad Rizwan has been in the form of his life and his fandom has reached new heights after Pakistan’s first win over India in World Cup history. Rizwan and Pakistan cricket team fans have known Rizwan to be a humble, down-to-earth person who has reached the top of the cricketing world through hard work.

Rizwan’s humbleness comes from his belief in Allah. According to Rizwan, his biggest strength is his belief in Allah and this phenomenon was on display in the match between Pakistan and India. During the drinks break, Rizwan took off his shoes and offered his prayers in the ground.

The moment was captured by thousands of people sitting in the crowd and several videos were uploaded to popular social media platforms. The videos have since gone viral as cricket fans from around the world appreciated Rizwan’s actions.

Prayer is a guarantee of success.❤ Mohammad Rizwan is praying Namaz during the match today against india and Allah accepted his prayer and blessed Pakistan with success. ❤#PakvsIndia#IndianCricketTeam #T20WorldCup2021 #MaukaMauka pic.twitter.com/IZqMYJRhzB