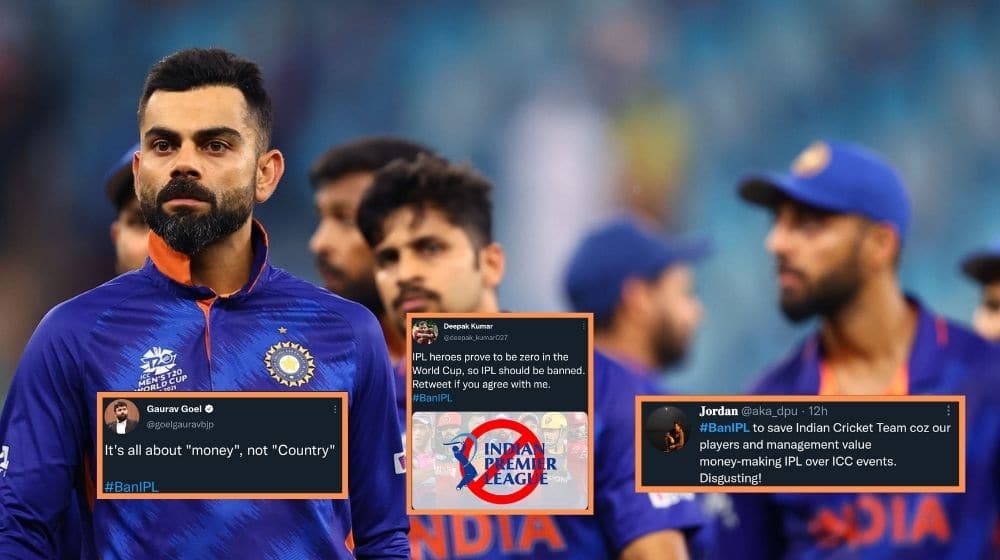 India’s hopes for qualifying for the semi-finals of the 2021 T20 World Cup hang by a thread as they suffered their second consecutive loss in the tournament. Having previously lost to arch-rivals Pakistan by 10 wickets, India put on another torrid show against a strong New Zealand side and lost by 8 wickets.

India currently sit at the fifth position in Group 2 of Super 12s and qualifying for the next round is no longer in their hands. They will need to rely on other results going their way alongside winning their next three matches convincingly to move onto the semi-final stage.

Indian cricket fans seem unimpressed with their team’s performances and believe that holding the IPL just before the tournament is the reason behind their downfall. The Indian cricket fraternity took to social media to voice their concerns and blamed IPL for their poor performances. Calls to ban IPL was one of the top trends in India after their embarrassing loss to New Zealand.

Here are some of the #BanIPL tweets:

The 2010 T20 World Cup was also lost due to IPL, It is clear from today's performance that BCCI has not learned anything.#BanIPL pic.twitter.com/zNhO8apM80

It's all about "money", not "Country"#BanIPL

Let @BCCI Continue doing their own IPL shyIPL let us build a national cricket team under sports ministry involve form a new board when it comes to INDIA. Let us treat cricket as any other sports. @PMOIndia @rashtrapatibhvn#BanIPL pic.twitter.com/22JxOOEQz6

Its no more a sports, but a business for BCCI. High time, Team India players should be banned from playing IPL. #BanIPL pic.twitter.com/OicXd0cXVK

IPL heroes prove to be zero in the World Cup, so IPL should be banned. Retweet if you agree with me. #BanIPL pic.twitter.com/CjY4EMyT7X