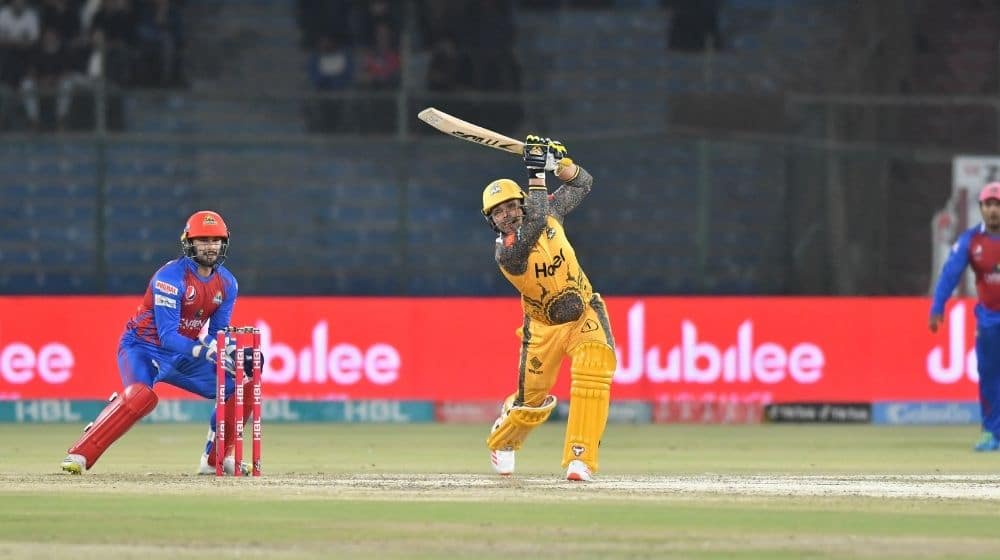 Peshawar Zalmi registered their second victory of the competition as they defeated Karachi Kings by 9 runs. Karachi remain winless in the first four matches of the tournament and face a monumental task to make a comeback in the competition. Peshawar on the other hand move to the fourth spot in the points table after a professional performance.

Zalmi got off to a solid start as opener Hazratullah Zazai smashed the Karachi bowlers all over the park. Despite losing momentum in the middle phase of the innings Zalmi’s veteran middle-order batter Shoaib Malik motored along and scored a scintillating half-century. Zalmi managed to finish with a respectable total of 173/4.

Karachi got of to a torrid start as they lost Sharjeel Khan in the very first over for a duck. Sahibzada Farhan followed suit as he was dismissed for a duck as well. Captain Babar Azam managed to rally his troops and put on a solid partnership with debutant Ian Cockbain. In the end, Zalmi’s bowlers were brilliant and managed to restrict the opposition batters. Karachi could only manage 164/6 and lost the match by 9 runs.

Shoaib Malik was named as player of the match for his brilliant all-round performance. He scored a half-century, picked up a crucial wicket of Sharjeel Khan and also took two catches in the outfield.

Karachi Kings will face Peshawar Zalmi in the 11th match of the PSL 2022 on Friday, 4 February. The match, scheduled at Karachi’s National Stadium, will start at 7:30 pm PST.

Karachi Kings and Peshawar Zalmi have had a poor start to PSL 7 and both teams will be determined to get back on the right track in tonight’s bottom-of-the-table encounter.

Karachi currently sit at the foot of the table with no wins in their three matches while Peshawar are at the fifth spot after one win in three matches. A win for Peshawar tonight will take them up to the fourth spot ahead of Quetta while Karachi can leapfrog Peshawar if they manage to win their first match of the tournament.

Karachi have had a horrid start to their campaign with three consecutive losses and things are not going to get much easier as two of their most potent bowlers Mohammad Amir and Mohammad Ilyas have been ruled out of the tournament due to injury. Karachi will be looking to improve in all three departments as their batters have not been able to score heavily and their bowling has looked lackluster throughout the tournament as well. They would need to find some solutions quickly in a must-win match for them.

Peshawar, on the other hand, have not yet been able to get the right team combination. If they manage to sort out this issue then they can get back to their best in no time. They will be banking on their explosive top order to fire and hand their bowlers a big total to work with. Zalmi need their experienced players, Wahab Riaz, Shoaib Malik, and Kamran Akmal to step up. With the imminent arrival of Saqib Mahmood and Liam Livingstone, Peshawar do possess one of the strongest squads in the league.

Both the teams are expected to make a few changes to their line-ups. Karachi will be forced to make at least one change as Mohammad Ilyas will not feature for them this season. Usman Shinwari is expected to get into the team at his expense. Rohail Nazir, Ian Cockbain, and Talha Ahsan are the other likely changes that will take place. Zalmi too will look to make some changes with pacer Arshad Iqbal likely to come into the line-up to bolster the fast bowling attack.

Overall, the two sides have come face to face 15 times in the tournament. Zalmi have an upper hand as they have won 10 while Kings have won 5. They last faced each other on 21 June 2021 in Abu Dhabi which Peshawar won by 5 wickets.

Babar Azam’s form at the top of the order has been a real concern for Karachi Kings. The number one T20I batter in the world will be determined to get back to his usual best and help his side to their first victory in the competition. Karachi has so far been unable to score heavily on batting-friendly pitches and Babar’s form has been a major factor in that.

Zalmi too have been struggling due to the form of their captain Wahab Riaz. Wahab is one of the most lethal T20 bowlers in the world and he will be determined to target Karachi’s weak batting unit and hand his team their second victory in the tournament.