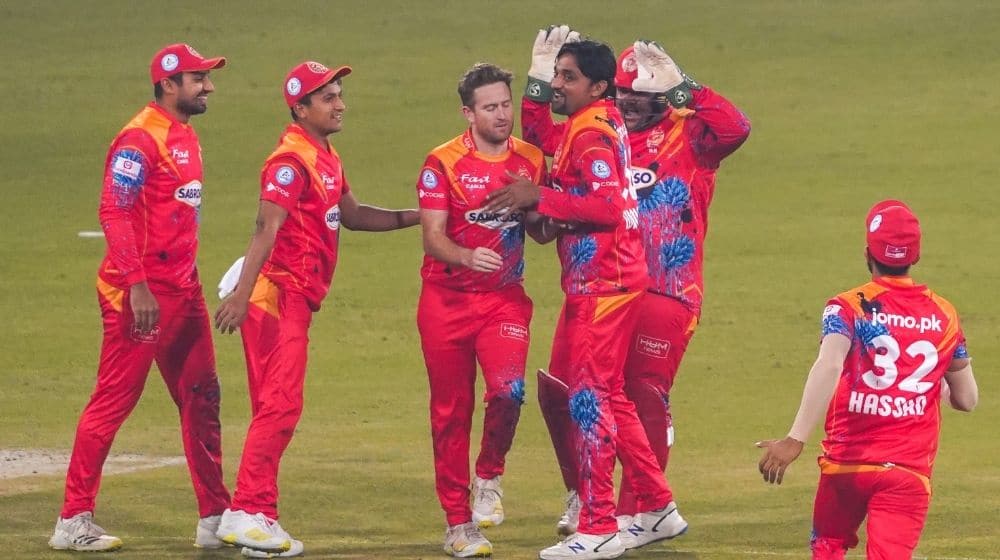 Karachi Kings have been knocked out of PSL after suffering their seventh successive loss. Islamabad, on the other hand, have maintained their third spot in the PSL points table after their fourth victory in the competition.

Islamabad got off to a solid start before losing wickets in quick succession. Hales and Shadab managed to steady the ship before Karachi struck back with wickets at regular intervals. Asif Ali and Faheem Ashraf lit up Gaddafi Stadium with some huge sixes at the back end of the innings and helped them to a formidable total of 191/7.

Karachi got off to yet another slow start as they lost Babar Azam to young fast bowler Zeeshan Zameer. Islamabad ran into trouble as Zeeshan and Shadab Khan both suffered injuries leaving Islamabad with only four fit bowling options.

Vice-captain Asif Ali decided to take the matter into his own hands and got important wickets of Sharjeel and Mohammad Nabi. Karachi staged an astonishing comeback as Imad Wasim and Qasim Akram struck magnificent half-centuries. Karachi were unable to chase 8 runs in the final over as Waqas Maqsood held his nerve to hand Islamabad a victory by 1 run.

Asif Ali was named as player of the match for his brilliant all-round performance. He scored 28 runs off 11 balls and finished with figures of 27/2 in 3 overs.

Islamabad United have a face-off with Karachi Kings in the 21st match of the Pakistan Super League (PSL) 2022. The two teams will battle it out against each other at the Gaddafi Stadium, Lahore at 7:30 pm PKT on February 14, Monday.

The good news for the Babar Azam lead Karachi Kings is that they still have a chance to make their way to the play-off of the ongoing PSL but they will have to depend on the results of other teams as well as win all of their matches with big margins.

Karachi Kings have lost all their matches in the first phase in Karachi while they began their Lahore leg with a massive 55 runs defeat against Peshawar Zalmi at Gaddafi Stadium, Lahore Yesterday.

However, today’s match will be a do or die for the Kings and definitely, they will try even harder to change the trend and win this match as today’s defeat will eliminate them from the race to play-offs.

Karachi Kings fans and management will be hoping Babar Azam to lead the team from the front and take the charge of accelerating the scoreboard instead of relying on batters around him as they continue to struggle.

Islamabad United, on the other hand, will look to continue their winning momentum and consolidate their position on the third spot of the PSL points table. If Islamabad United win today’s clash they will be staying in the third spot but it will give them a decent lead over Quetta Gladiators and Peshawar Zalmi.

Overall, the two teams have come face to face 17 times in the tournament. Islamabad United have an upper hand as they have won 11 while Kings have won 6. They last faced each other on 6 February 2022 at National Stadium Karachi which Islamabad won by 42 runs.

Karachi Kings will be hoping Babar Azam to lead the team from the front and to avoid a defensive mood as he has adopted in the ongoing season. Sharjeel Khan will also be expected to fire for Karachi as they are heavily reliant on him in the batting department. Both Babar Azam and Sharjeel have a good reputation in PSL and they have also a good record against Islamabad.

Islamabad United will focus to improve their bowling department ahead of the all-important fixtures. Islamabad United’s leading fast bowler, Hasan Ali will have to retain his form ahead of the important stage of PSL. Shadab Khan will also have to keep his form alive going into the business end of the league.