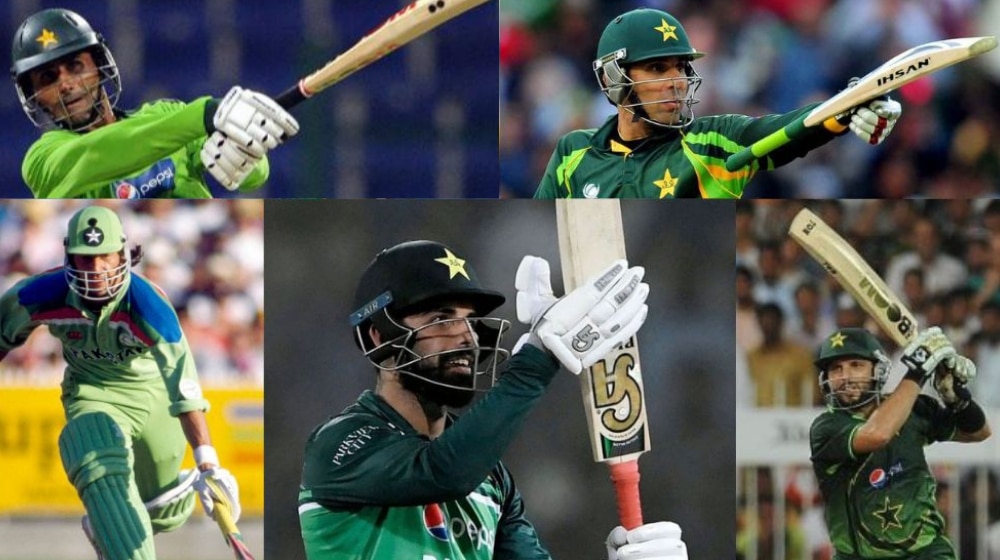 Reaching the century milestone in the game of cricket has always been a symbol of success for batters, as the number of centuries remains a well-known criterion for judging the greatness of batters. However, in certain situations, the batters display class and quality despite falling short of a hundred and their not-a-century innings have no less contribution than a hundred for their team.

Here is a list of the top 10 ODI innings by Pakistani batters who contributed a great deal to the win but fell short of a hundred:

In 2011, New Zealand decided to bat first at home as Pakistani pacers dominated the start. After an early collapse, the lower middle-order including James Franklin, Brenden McCullum, and Nathan McCullum helped New Zealand post a target of 263 runs at the loss of seven wickets.

While Pakistan started off rather steadily, Scott Styris soon left them struggling at 84 for 3. Then came a match-saving partnership between Misbah-ul-Haq and Younis Khan which took Pakistan to 173, before Younis fell at 42.

New Zealand once again regained control as Misbah-ul-Haq saw Umar Akmal and Shahid Afridi walking back to the pavilion with Pakistan reduced to 198 for 6. However, it was Misbah-ul-Haq who dug Pakistan out of the self-created hole, smashing 93* off 91, aided by Sohail Tanvir in the end as Pakistan won a thriller with 6 balls and 2 wickets remaining.

In 2004, Pakistan’s middle-order had a lot of work as Pakistan were 73/4 in reply to New Zealand’s 307. Inzamam-ul-Haq and Moin Khan put a stop to the slipping of wickets but they could not maintain the run rate so the asking rate kept creeping up. But then walked in Abdul Razzaq who turned the game on its head, hitting fours and sixes to all parts of the stadium. Razzaq took Pakistan to 294 from 171 with his spectacular 89 off only 40 balls. However, he missed out on his century by 11 runs and Pakistan missed out on the victory by 4 runs as they were all out at 303.

Taking on West Indies in Multan, Pakistan opted to bat first as the openers provided an 85-run stand. However, the home side was soon in a spot of bother. Walking back for 1, Babar Azam failed to level the record of four consecutive hundreds by Kumar Sangakkara, while Imam-ul-Haq continued his streak by scoring 7th consecutive 50. Despite Imam’s fifty, the wickets kept tumbling at the other end.

Pakistan were reeling at 117 for 5 when Shadab Khan walked in at number 7 to join Khushdil Shah. Forming a solid partnership with Khushdil Shah, Shadab Khan played one of the greatest knocks under pressure as he rotated the strike, and turned singles into doubles.

In the meanwhile, he did not shy away from punishing the bad balls. Pakistan were 201 in the 40th over when Akeal Hosein removed Khushdil Shah for 34 and the others followed. However, the continuous fall of wickets did not stop Shadab Khan from attacking the Windies’ bowlers in the final overs. The star all-rounder missed out on his maiden century by just 14 runs as he got out in the last over looking for some extra runs.

Despite not getting his century, Shadab Khan registered an innings to be remembered as his 86 off 78 helped Pakistan post 269 runs in 48 overs.

The leg-spinner later starred with the ball picking up 4 wickets to limit West Indies to 216.

Facing India in 2000, Pakistan were struggling at 156 for 5 when Mohammad Yousuf and Abdul Razzaq started the rescue operation. While Mohammad Yousuf kept calm, Abdul Razzaq accelerated the innings to add some extra runs that proved crucial in the end. He mounted 70 runs off 52 balls hitting 4 fours and a couple of sixes. The star batter remained unbeaten as Pakistan reached a decent total of 262 at the loss of 7 wickets.

Despite a quality cameo with the bat, Abdul Razzaq’s job was not yet done as India took off steadily. However, the hero of the first innings starred again removing the Indian top order and then undoing the potential threats in the end. Abdul Razzaq bagged a fifer as India were all out for 230 and Pakistan won the match by 32 runs.

When Pakistan played Sri Lanka in Lucknow during Nehru Cup in 1989, skipper Imran Khan decided to bat first after winning the toss. He soon had to walk out in the middle as the top order collapsed leaving Pakistan at 32 for 3 down.

Saleem Malik supported the captain for a while before he fell at the team score of 70. Collaborating with Abdul Qadir, Wasim Akram, and Aamer Malik, Imran Khan kept nudging the scoreboard as he remained not out at the end of 50 overs. His calm yet crucial 84 off 110 saved the day, helping Pakistan reach a defendable total of 219 for the loss of 6 wickets.

In 2013, the start of Pakistan’s ODI campaign on the West Indies tour proved to be Shahid Afridi’s most iconic outing. Batting first, Pakistan’s top order was hammered by Jason Holder as they were 5 down for 47.

While Misbah-ul-Haq stood firm against the bowling attack, he was unable to lift the run rate until Shahid Afridi walked in. As if unaware of the damage already done, Shahid Afridi started off with fours and sixes not holding back from exhibiting his usual attacking style.

Bringing up his 50 off 35 balls, Shahid Afridi delivered one of those game-changing performances the star all-rounder has always been known for. While Misbah-ul-Haq reached his half-century off 121 balls, Shahid Afridi kept charging to smash 76 runs off 55 balls laced with 6 fours and 5 sixes. Rescuing from the situation where half the team was back for 5o runs, Shahid Afridi’s heroics brought Pakistan to 224 for 9.

After playing an incredible match-transforming inning, Shahid Afridi destroyed West Indies with the ball too, picking up 7 wickets for 12 runs as West Indies were all out for 98.

Playing New Zealand at home ground, Pakistan lost their openers early while chasing 278. Shahid Afridi’s quick 40 helped Pakistan reach 79 for 3. But it was a solid partnership between Younis Khan and Abdul Razzaq which carried Pakistan home. A steady innings of 70 off 92 for Younis Khan ended at a total of 172 for 4. However, Abdul Razzaq’s 86 off 84 laced with 10 fours and a six sealed the deal while Rashid Latif and Inzamam-ul-Haq chipped in with 28 and 26 respectively. Abdul Razzaq was named Player of the Match for his all-round performance as Pakistan won by 3 wickets.

Pakistan’s top order collapsed while batting first in the first ODI against Zimbabwe. Half of the team was back to the pavilion for a collective score of 100. While Younis Khan saved his end, Zimbabwe bowlers continued to dominate the other end. At 159, Abdul Razzaq joined Younis Khan to prove yet again why history remembers him as one of the best all-rounders. Batting at number 7, Abdul Razzaq single-handedly carried Pakistan to a defendable total of 278 as he smashed 76 off only 53 balls laced with 9 boundaries.

He then took two wickets as Zimbabwe were bundled out for 210.

When England toured Pakistan in 2005, the two teams met at Rawalpindi Cricket Stadium for the 4th ODI of the series. Pakistani top order was soon dashed to the ground by the English bowling attack. However, the skipper Inzamam-ul-Haq stepped up as Pakistan recovered from 58 for 4. Despite finding no support on the other end, Inzamam-ul-Haq battled till the end as he scored 81 to help Pakistan cross the 200 mark. Pakistan managed 210 in 47.2 overs.

On the other hand, no English batter could play the anchor as Inzamam-ul-Haq did for Pakistan as the match resulted in the home team’s favor by 13 runs.

In a virtual knock-out match for Pakistan in ICC Champions Trophy 2017, Sarfaraz Ahmed delivered a captain’s knock in the true sense of the word. Chasing Sri Lanka’s 236 at Cardiff, Pakistan were off to a good start with a fifty from Fakhar Zaman.

However, they were soon struggling at 137 for 6, as the middle-order collapsed. Faheem Ashraf added 15 runs but he failed to support the skipper after getting run out unluckily at the non-striker’s end.

In the conditions that aided the bowlers, Sarfaraz Ahmed kept chipping away as he told Mohammad Amir to stay strong at the other one. Holding his nerves on the big stage, Sarfaraz Ahmed, along with Mohammad Amir, dragged Pakistan just over the line as they won the nail-biting contest by 3 wickets.

Note: These innings are rated in no particular order and are purely subjective.