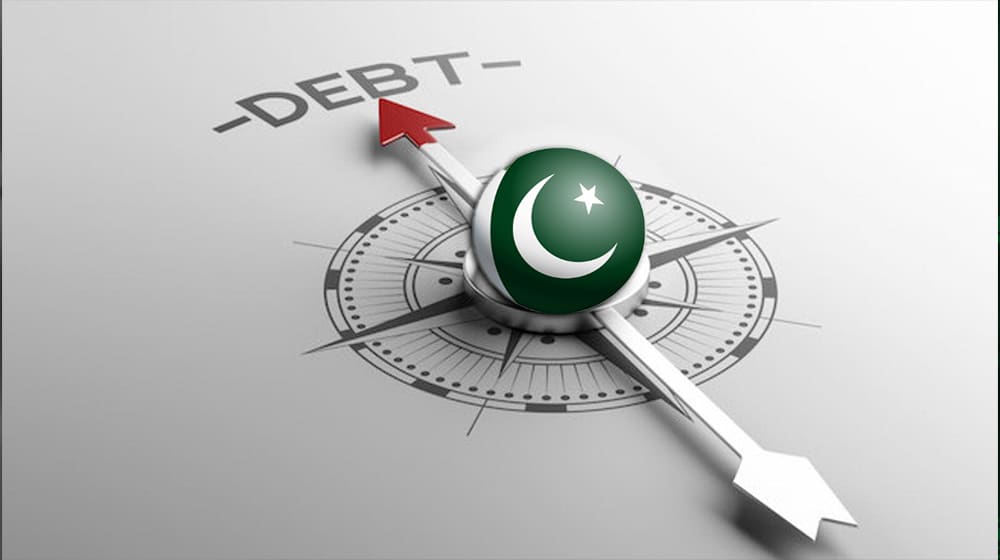 External debt restructuring is an eventuality for Pakistan and the country should try to convert its short-term external loans with long-term with the help of friendly countries like China, Saudi Arabia, UAE etc. If that is not doable, Pakistan should try G-20 common framework of debt restructuring.

This large repayment is due to extensive external borrowings. 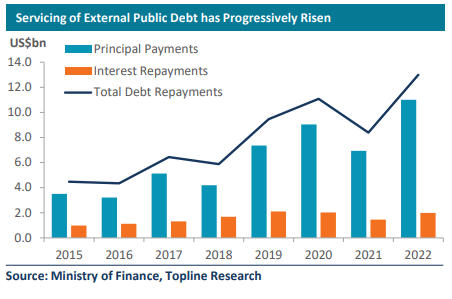 Other than this increase, the composition of external debt has also changed and the proportion of short-term expensive debt has increased. Also, new debt categories have emerged which include commercial loans ($9.5 billion) in FY22, and central bank deposits ($2.7 billion) that are short-term. Also, bilateral non-Paris club debt that used to be negligible has now ballooned to almost 20 percent of total external debt and liabilities.

These new significant categories of debt are usually shorter-term and carry higher interest rates. Resultantly, these increases in debt and changes in composition have led to higher debt servicing payments on an annual basis.

Pakistan on average pays over $1 billion monthly as debt repayment and interest on its public debt as per the Ministry of Finance. However, another major head has become large since 2017, that is, external debt rollovers. These numbers that have grown 9 times from $1.3 billion in 2015 to around $12 billion in 2022 (both public and private). 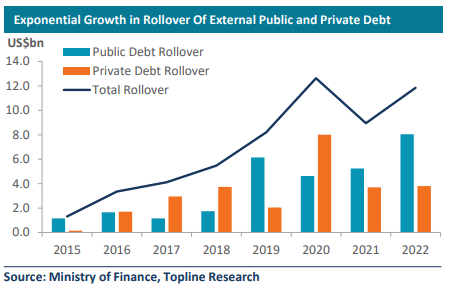 The current outstanding forwards/swaps at SBP are close to $4.7 billion (November 30, 2022). These are not included in any of the statistics that are mentioned by the government reporting agencies quoting debt repayment obligations. It should be noted that these are short-term and are also subject to servicing or rollover on a continued basis. Including these would increase Pakistan’s annual debt repayment obligations from $73 billion to $85 billion during FY23-25.

One way out of the debt repayment conundrum will be to convert short-term rollover debt into the medium-long term. To note, out of $73 billion debt repayment obligations for FY23-25, $40 billion is short-term debt.

If this debt is deferred for 3-5 years, then annual debt repayment obligations will halve to $10-12 billion during this period. This is an ideal situation and the government should focus on this route of orderly debt restructuring.

As months continue to go by with concerns on the external front, Pakistan’s debt rollover risk and chances of disorderly default are rising. This is evident from high Eurobond yields which are showing that investors have lost faith in Pakistan’s ability to adequately service its Eurobonds. 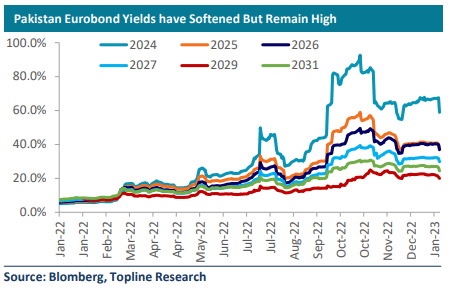 Consequently, various local think tanks and trade bodies have come out and expressed concerns on the external debt repayment front and have recommended debt restructuring as the solution. 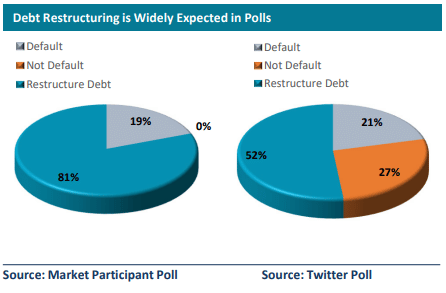 If Pakistan’s short-term debt conversion into long-term debt is not doable, Pakistan should immediately consider opting for the G-20 common framework of debt restructuring. The country needs to make an application after which a credit committee is convened. This process is supported by the IMF and the World Bank, including through their Debt Sustainability Analysis. It is a time-consuming process and countries like Chad, Ethiopia, Zambia, and very recently Ghana have opted for the common framework for debt treatments.

If Pakistan delays the negotiation process of debt restructuring at a time when the IMF review is getting pushed back, then the consequences will be very painful. This is because delay in policy action and debt restructuring has resulted in default in many countries.