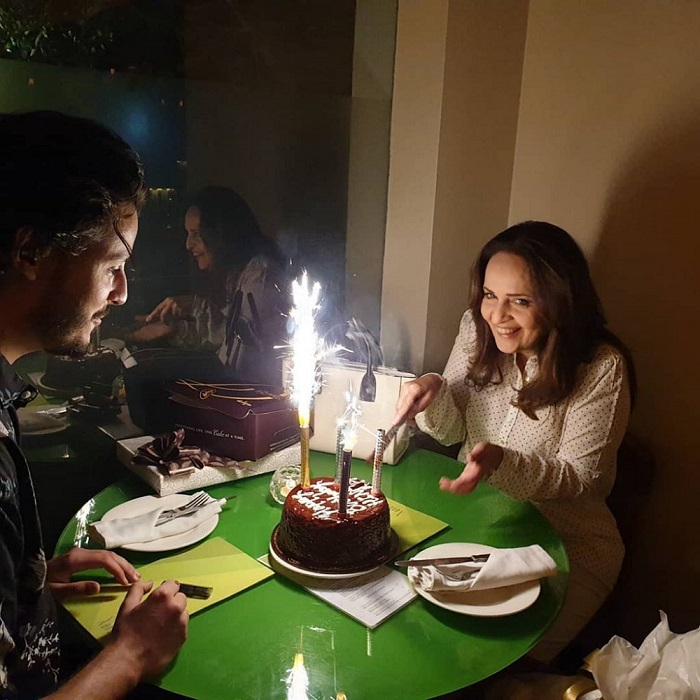 Osman Khalid Butt gave Hina Bayat a surprise for her birthday in August. The actress recently posted a picture of the two on her Instagram account.

She thanked her Aunn Zara co-star for the gesture he made weeks ago.

The Humsafar star wrote, “How do you thank someone for making you feel so special?? Weeks later I’m still at a loss because words just don’t seem enough…my bacha [child], this one will last me for many, many years.”

In the photo, we see her beaming over a cake as Butt looks on. A bouquet of flowers is seen on the seat next to her. Clearly, Butt did a good job of celebrating her.

Butt replied to the post in a comment, reciprocating her feelings and saying, “Love you to the moon and back!”

The two have known each other since 2012’s Aik Nayi Cinderella where they played mother and son. They also played a mother-son pair on the hit show Aunn Zara, a show about two clashing personalities who marry each other.

Bayat is a veteran actor who has been active since 2011. She has starred in a long list of drama serials including Uraan, Ishq Gumshada, and Zindagi Gulzar Hai.

Her latest project was the Urdu 1 show, Baaghi in 2018.  Baaghi was a drama based on social media star Qandeel Baloch’s life. It starred Saba Qamar as Qandeel. The drama’s screenplay written by Umera Ahmed.

Hina Bayat was reunited with Butt for Baaghi as he also co-starred in it, making it their third co-starring experience. Pakistani audiences have seen the two grow close after the iconic Aunn Zara performance.

Aunn from Aunn Zara is one of Butt’s most well-known roles though he has been keeping busy since the drama ended. He has starred in films like Balu Mahi, Janaan, and Baaji. He has also acted in dramas like Diyar-e-Dil and Sanam.

He currently stars in HUM TV’s Ehd-e-Wafa, a hit drama about four friends and their lives at a cadet college. The drama has been receiving high praise and is reminiscent of older military dramas like Alpha, Bravo, Charlie and Sunehray Din.

Here’s What Zodiac Sign Your Favorite Pakistani Stars Belong To