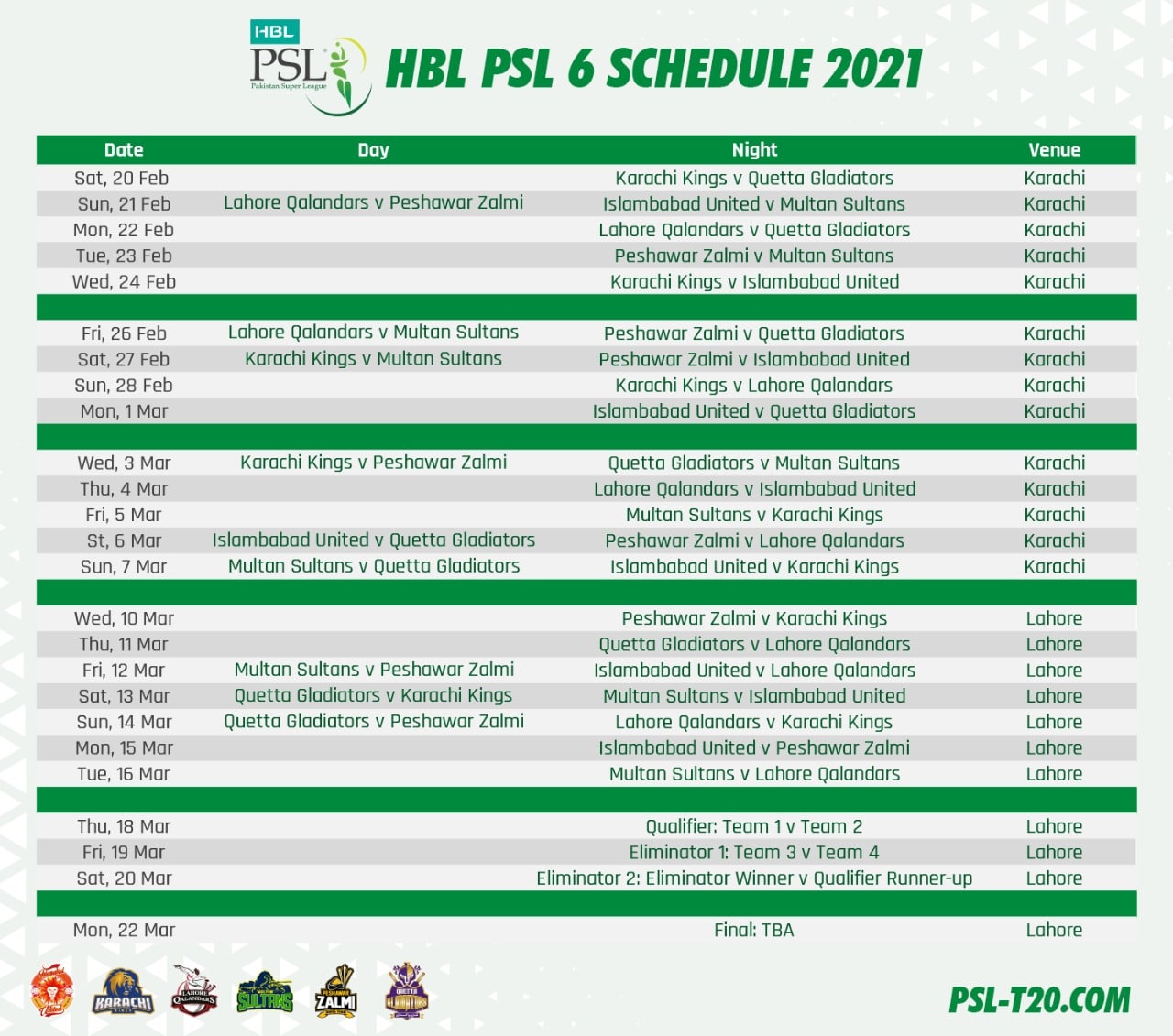 Six teams will battle it out over the next month in thirty-four grueling matches to be crowned as the PSL 2021champions. To date, four teams have had the honor of being crowned champions. Islamabad did it twice, in PSL 2016 and PSL 2018, while Peshawar Zalmi, Quetta Gladiators, and Karachi Kings have achieved the feat once.

As always, the release of the Pakistan Super League schedule officially marks the start of the countdown to the season, and this time around the announcement PSL 6 schedule officially marks the start of PSL 2021. Defending champions, Karachi Kings take on former PSL champions, Quetta Gladiators in the opening match of PSL 6 on 20 February 2021 at National Stadium Karachi. The final of the tournament will be played on 22 March 2021 at Gaddafi Stadium Lahore.

Fans are always excited to see the PSL schedule of their teams and mark their calendars to watch their favorite teams in action. Let’s have a look at the whole PSL 6 schedule and see when your favorite teams will be in action in PSL 2021.

Apart from the final and the play-offs, Karachi Kings vs Lahore Qalandars is the match that has the fans glued to their TV screens. As the PSL schedule is released, fans of not only both these teams but cricket fans all around the world would be noting down the dates of the two matches between the two biggest cities of Pakistan.

The first match between Karachi Kings and Lahore Qalandars on the group stage will be played on Sunday, 28 February at National Stadium Karachi at 7 pm. The return fixture will be played at Gaddafi Stadium, Lahore on Sunday, 14 March at 7 pm.

The other important fixtures to note down in the PSL schedule are the play-offs and the final.

PCB decided to host the entire tournament at only two venues due to the Covid-19 situation in the country. In the previous season, matches were held at Karachi, Lahore, Rawalpindi, and Multan. This time around though the tournament will only be held in Karachi and Lahore.

Have a look at our PSL Points Table page to see where your team’s standing.