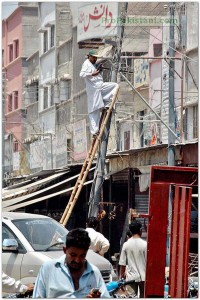 It is reported that District Consumer Court Judge Syed Maruf Ahmed Ali ordered PTCL to refund Rs 4,300 along with the cost amounting to Rs 10,000 to the petitioner within 10 days on an suit case filed by Muhammad Jamshed Rana under Punjab Consumer Protection Act, 2005, for the recovery of PTCL bill payments he made with the cost of suit – He had been paying phone bills while his phone remained dead.

“The Post” has reported that complainant was submitted against PTCL that was alleged that since the installation of the connection, it remained out of order and several written as well as telephonic complaints were made to PTCL, but to no effect, adding the petitioner was paying regularly monthly bills but the said phone connection has been out of order for the last 14 months.

Paper says that the petitioner did his best to get the issue resolved and he even approached GM, PTCL for restoration of the connection and refund of amount paid on account of line rent.

However, in total desperation, the petitioner issued a legal notice to PTCL but no reply was received and finally prayed to the court for the recovery of 14 months line rent and damages. Asif said the court, after hearing arguments of both sides and perusing the record, observed that the petitioner had proved his case and was entitled to refund of the amount along with another sum of Rs 10,000 which shall be paid by the respondent within 10 days of this order.

My first impression after reading this news was that PTCL will be hiring more lawyers in coming days, as this can be a start to un-ending suit cases against them. To be true, not only PTCL, but all other telecom companies may face such Suits from their subscribers, if they violate any consumer law.

One of my friend is also planning to file a suit against UBL for holding Rs. 50,000 for 10 days without any reason. And even his complain was not logged by CSR… I will post you guys once there is any update on this