We have seen Mobilink’s declining sales in previous months, which maybe didn’t jolt experts’ mind due to their size and weight of customers. It’s very obvious that a company with subscribers’ base of 31 million can not attain growth rate of even 1 percent or so, also given that cellular subscribers’ teledensity has hit 56 percent mark.

But following figures of international outgoing traffic for cellular companies (through PTCL) for the period of April, May and June 2008 may wide open many eyes. A very reliable industry source has given us these stats (however these stats can’t be considered official – but we are likely to see them in coming PTA’s annual report) which reveals that Mobilink is almost disappearing from the graph.

May 2008 can be considered most shocking month for Mobilink, as they were able to generate merely 56,142 minutes for international calls compared 64,371 in June 2008. For all of three months, Mobilink earned total of 1,581,309 international minutes. Even Zong scored more international traffic than Mobilink with 5,356,917 minutes in the same period. 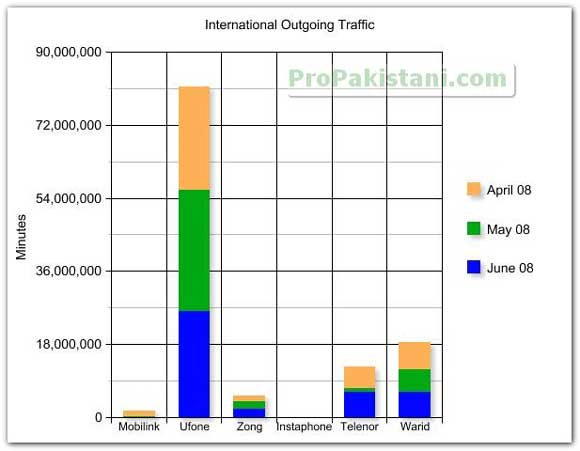 While on other hands, Ufone’s skyscraper is seen very firm standing at 81,340,900 minutes for three months. Warid is heading Telenor with 18,533,756 minutes, where Telenor gained 12,504,509 minutes. Instaphone seems contented with their 5,438 international outgoing minutes in three months.

This traffic information for international outgoing is just a depiction of market situation. However, we can’t actually assume this international traffic (through PTCL) as directly proportional to local or national traffic these companies have; but due to a fact that international traffic contributes major part in revenues (due to very low local call rates), it is considered vital. We are awaiting official comments from Mobilink on this.

We are not sure about how well Mobilink’s international call half rate offer played for them, but we hope that cellular giant is going to do enough in coming months to retain its position.

Note: These stats represent traffic carried away from PTCL Gateway for International outgoing calls only.

Update: In response to a question that If Mobilink uses any other gateway for international outgoing traffic other than PTCL?? If yes then what proportion of international traffic is routed to PTCL’s gateway? and what share goes to other resources?

Mobilink official replied: ” We use our own LDI (Long Distance International) in addition to PTCL”