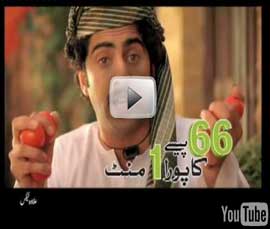 In my recently published columns, I had predicted that the war of advertising in mobile sector will increase and companies will fight for every customer. During last two weeks, we can sense the growing competition reaching a level where cellcos’ are fighting for Paisas now and everyone is claiming lowest call rates.

Zong Aims to beat the Big One

Despite the fact that current economic situation doesn’t allow low pricing but we know that this doesn’t matter much for Chinese and they beat the competition with low rates.

No SamJhota… A Move Overshadowed

When Mobilink introduced its No Samjhota TVC, it didn’t seem like that others will attack this campaign specifically. But due to extensive campaign, not only on electronic but also in print and outdoor mediums, we quickly saw a reaction.

Lately, Mobilink is playing its coverage campaign; I believe the only thing left with Mobilink to advertise – which is in fact a good strategy to remain in the eyes without investing much on packages.

At this time, Ufone is airing 3 TVCs on different TV channels, which include coverage, dormant connections and 3 minute package campaigns.

I would like to appreciate the theme of 3 minute TVC. Campaigns’ closeness with nature and song “Ab tu Aadit c hay 3 Minute Baat Kernay ki” is buzzing the customers.

Telenor is on with its classy, delicate and impressive post-paid campaign. In the race of post-paid, Telenor is enjoying competition less environment, and one can easily assume that they will capture handful amount of share in post-paid segment.

Warid has nothing to offer.

At a time when we have heard a good financial support for Warid from its parent company, you may wonder that they Warid is out of this competition. When Zong, Telenor, Mobilink and Ufone are fighting hard to secure their customers and business Warid is enjoying deep sleep. We know that they have consumed their advertising budget though badly planned campaigns earlier last year.

If you have any suggestion and comments about this article, please feel free to communicate with us by commenting below. It is matter of fact that your comments are very encouraging for us to research and write more about this industry.