In its detailed stats made exclusively available to ProPakistani, Pakistan Telecommunication Authority said that Internet Service Providers added a total of 39,948 subscribers in June 2010 compared to 43,893 subscribers in May 2010.

Broadband growth rate has leaned down in previous three months but if history repeats itself, growth rate is expected to shoot up in coming months due to slashed rates.

Broadband penetration in the country reached at 0.52% at the end of April 2010 from 0.26% a year ago, showing 100 percent more penetration in one fiscal year. 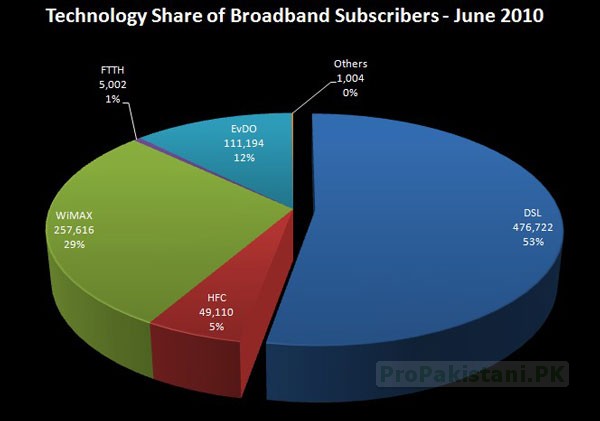 PTA didn’t reveal company wise/Technology wise details of June 2010; however, it said that EvDO leaded from the front among the broadband technologies in terms of subscriber addition in May 2010 with a total of 19,804 net additions.

Over the year WiMAX performed well in terms of net addition in subscribers , however, in May 2010 WiMAX slipped at forth slot. 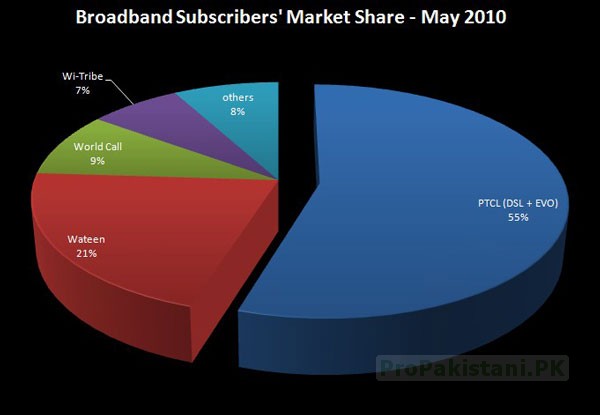 PTCL sits handsomely on the number one spot with 460,942 subscribers and a 55 percent market share combining its DSL and EvDO services. PTCL added the second highest number of subscribers, i.e. 18,869 in the month of May 2010.

As per PTA stats, Wateen is said to be at number two in terms of subscribers with 180,107 subscribers and 21 percent market share.

WorldCall added highest number of subscribers in May 2010 with a figure of 20,230 additions, its market share increased from 7% to 9%.