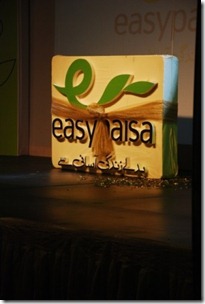 Telenor Easypaisa promises empowerment and convenience to the masses in carrying out financial transactions whether they live in the urban area or rural communities of Pakistan and whether they are banked or unbanked, said Anjum Rahman, Director Corporate Communications and Responsibility at Telenor Pakistan.

Telenor started its mobile-banking services with 2,500 outlets in October 2009. After an year or so there are now a total of 12,000 mobile-banking points, outnumbering the total number of bank branches and post offices in the country, she said in the exclusive interview with ProPakistani.

As per an estimate, Pakistan has more than 8,000 banks branches and it has 7,000 post offices in large and small cities.

Easypaisa now stands as the largest financial services network in the country with a much stronger rural presence in the country, she asserted.

Telenor’s mobile-banking service has been gaining tremendous popularity as credible and fastest source of money transfer across the country as showed by a significant number of people transacted Rs. 17 billion of amount against 10 million transactions carried in merely one year and three months, revealed Anjum Rahman.

Tracing the success of the service she briefed that Easypaisa’s transacted amount has witnessed 70 percent quantum jump with Rs. 7 billion since October 2010.

On the other hand, the total number of transactions carried recorded 33.3 percent or 4 million increase in just three months, showing a tremendous growth in service utility by the customers, she added.

It is pertinent to mention here, Telenor Pakistan had recorded Rs. 10 billion transacted amount against 6 million transactions carried by the end of 15, October 2010, the day service completed its first year.

Anjum said the Telenor’s management has continued to promote the services in the country, particularly for those living in far flung or rural areas in order to ease mobile-banking services in Pakistan.

The company has added 1,000 outlets of Easypaisa in 550 urban and rural areas in last three months only, told Anjum.

Telenor Easypaisa has engaged with various multinational and charity organization to ensure secure and rapid money transaction between the people-to-people and people-to-organizations.

In past Ramadan, it has played the role of a bridge between many charity organization and donors. Easypaisa has also collaborated with charity organizations for donation transfer via easypaisa to Pakistan Red Crescent Society, Shaukat Khanum Memorial Trust Hospital, and SOS Children’s Villages of Pakistan.

Easypaisa service has led the Telenor Pakistan towards global accolades as the operator has secured Mobile Money Transfer Award in November 2010.

Telenor Pakistan has also been shortlisted for the GSMA’s Global Mobile Awards in two categories and competing the prestigious contest of the telecom world with renowned telecom operators.