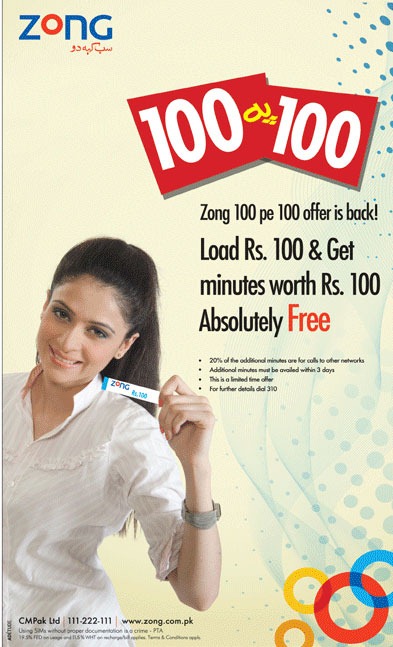 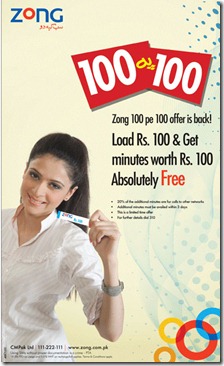 After receiving an overwhelming response to its unique 100 pay 100 offer, Zong has decided to re-launch the offer for its customers.

With 100 pay 100 offer, Zong rewards its prepaid customers by doubling the balance every time they re-charge it by Rs. 100 or more denomination scratch cards / mini load.

Zong’s subscribers had shown immense appreciation for the offer when it was launched earlier in November 2010.

“We aim at facilitating our subscribers and providing them the most economical and affordable packages. We had received a great response earlier so we decided to gratify our customers again.

We are re-launching this scheme so that ZONG’s subscribers can enjoy the freedom of communication through ZONG easily.”

He adds, “Trouble-free and instant communication is essential in today’s world but with increasing inflation the subscribers now demand even cheaper call rates. ZONG realizes this need and has the most competitive call rates.”

ZONG has become the fastest growing operator in Pakistan, as it recently added 3.1 million subscribers in its base during first three quarter of fiscal year 2010 – 2011 and showed the highest growth in users’ number among all telecom operators.