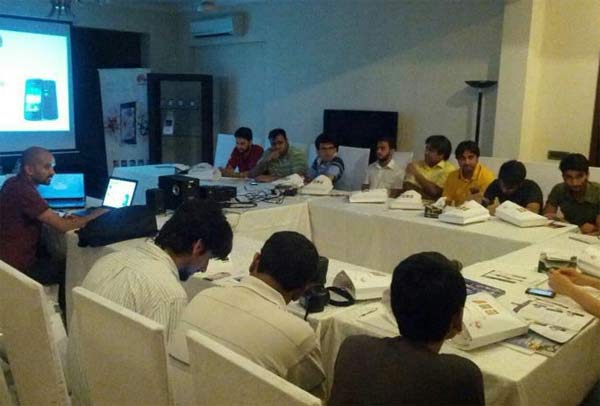 Yesterday evening Huawei finally met the bloggers community of Lahore, which I believe, they should have done long before the official launch of Huawei Smartphones in Pakistan.

I haven’t attended the Launch event held last month, but I have heard of negative reviews about it. But yesterday’s event was indeed very good one. Bramerz was responsible for sending invitations but apparently they didn’t send out enough emails, as there were only 15 bloggers present at the event. I my self got the word from a friend.

The event was supposed to start at 6:00pm sharp but, as always, it started a little late. Salman Muazzam from Huawei Marketing, kicked off the event by getting the introduction from all the participants.

He showed a little presentation about Huawei’s success story in the Android smartphone manufacturing. After the Iftaar/Namaz break, we finally met with the Smart 5, Huawei’s 5 smartphones recently launched in Pakistan, Y200, Vision, G300, Honor & Ascend P1.

The presentation revealed the specifications about the these smartphones as well as their prices and how they compete with other smartphones with the similar price tags.

Bruce Fanhong, from Huawei answered questions raised about the User Interface (which is very close to stock UI with no major customization) and the battery performance of these smartphones. He revealed that starting next month company is going to introudce the “Emotional UI” and all the phones will get the OTA update. Bruce also revealed that in September Huawei will come up with new models.

Muzzaffar Hayat, Managing Director Airlink Communication (Distributor Company) asked the Bloggers to give their feedback about the devices, he asked to create Brand awareness among our valued readers.

Most of Bloggers appreciated the phones, I my self admit that built quality and specs of these phones are good, and they don’t stand anywhere near to Q Mobile or the “China Phones” Category rather they can aggressively compete Samsung or HTC. But they need to work on the UI and introduce some latest Quad Core phones in Market as well as affordable low end phones like Y200 to grab more share in the market.

We will be reviewing these smartphones in the coming days for you guys so keep visiting.