As promised, I am back with part 2 of this multi-part post in which we are discussing Rahman Malik’s intention of blocking prepaid SIMs to enhance law and order situation in the country.

Part 1 can be read here.

Before we move ahead, it is learned that blocking of prepaid SIMs is still on the cards, to make sure that all unregistered SIMs are eliminated from the country. It is said that a decision is likely to be taken next week during a scheduled meeting at Pakistan Telecommunication Headquarters where representatives of all cellular companies will meet under the headship of Chairman PTA to discuss the matter.

Meeting would decide whether to block SIMs in a step-by-step manner or to regularize them with proper checks and balances. If the meeting decided to block illegal pre-paid cellular SIMs, all mobile companies would have no option but to comply and immediately block all connections issued on fake Computerized National Identity Cards (CNICs).

About 80 percent of all mobile phone SIMs are issued on prepaid accounts and according to Pakistan Telecommunication Authority, nearly two million of these SIMs were issued on fake documents.

As you have rightly read, PTA believes that 2 million SIMs (out of 120 million) are issued on fake documents, while another official source, i.e. Mr. Ahmed Chinoy, chief CPLC Sindh opinioned that 70 percent of all SIMs are fake.

Mr. Chinoy was speaking with Karman Khan of Geo TV last night. In the same show (can be watched here) Mr. Rahman Malik was also shown as saying that Mobile Phones are responsible for 75 percent of crimes in the society.

Though the facts observed by various official sources differ a lot, but indeed we are in problem. Everyone will agree that menace of un-registered or illegally documented SIMs is cause of unrest for all kinds of crime, ranging from wrong calls to bomb blasts.

At this point of time, one might be interested to know the basic cause of these unregistered SIMs. For that let me take you back to 2005-06 when first time the issue of unregistered SIMs had surfaced.

Cellular companies, back in 2005-06 and later on too, vigorously sold SIMs even without asking the customers for ID cards or getting the registration forms filled. That was the time when sales manager were busy, round the clock, in selling SIMs and making their commissions. Franchisees were part of this, or let me say they were the front end or working hand of this whole game. They sold SIMs without documentation for commissions they are still living upon. 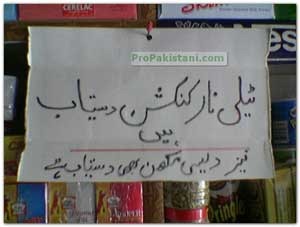 These un-official outlets were never concerned about registrations of SIMs, instead they just contented with Rs. 25 they could make with each sale.

Franchisers, then, had to hire special staff to just fill the forms, who would fill thousands of fake registration forms (of SIMs that were sold at un-official outlets) against an unknown CNIC. One CNIC was often used for thousands of registrations.

Just to recall our readers, that was the time when crossing of photo-copy of CNIC was first introduced, to make sure that copy of our CNIC isn’t used by some mobile phone franchisee for fake registrations.

In short, mobile phone SIMs were sold in every corner of the country without registration with only one target in mind: Increase the number of subscribers.

In addition to fake registrations, mobile phone operators found it valuable enough to self-activate the SIMs – meaning that SIM weren’t issued to any customer but they were activated without any use to make them counted as a subscriber (even when they had to pay activation charges from their pockets) to increase the subscribers’ base to please their bosses back in their head-offices aboard and to increase companies’ stock value.

Its not that Pakistan Telecommunication Authority wasn’t aware of the situation. Thanks to “Wrong Calls” the issue was identified very early and was highlighted in media too. But there was very little that PTA did to stop cellular companies from selling large-scale un-registered SIMs.

PTA’s then Chairman, Maj Gen (R) Shahzada Alam was enjoying the feather in his cap for selling GSM licenses and then taking the cellular subscriber base from under five million to eighty million in just four years. He was rewarded nationally and internationally for this achievement.

But who knew then that this achievement of Mr. Alam was a suicidal growth that would one day give Mr. Rahman Malik a chance to kill the communication in whole country.

PTA, after Dr. Yasin became the chairman, introduced various methodologies, SOPs (including 789 system, 668, end to pre-activated SIMs and so on) to curb illegal sale of SIM, but those helped only with the registration of new SIMs. Despite all the measures, already sold SIMs (in earlier years) were never registered and the problem persisted.

PTA, mainly on pressure of Rahman Malik, blocked millions of fake SIMs in various phases to make sure that no illegal SIM existed. But, for that, they had to rely on cellular companies – who never wanted to decrease their subscribers’ base.

As described above, it is understandable that we are in a severe situation. There are un-registered SIMs available in our vicinity plus there are ways of obtaining new SIMs without proper registrations.

Just for the record, I have been saying: “This must end, This must end now” for over 4 years (ever since I started this blog) but I can tell you that problem remains there. Apparently, no one is taking interest (to completely eliminate illegal SIMs from the country) for reasons obvious to everyone.

Every 4 to 6 months, Rahman Malik comes in and issues statements for curbing illegal SIMs, in response to which PTA blocks few million SIMs and that’s it. Everyone gets back to their lives – leaving the problem there as it is.

I am confident that this time too PTA will block few million SIMs and then everyone will get to their routine work. Un-registered SIMs will remain there as they are.

Do we have a solution?

If you are wondering that we are in middle of no where, and blocking prepaid SIMs is the only solution then you are wrong. Fortunately, we have case studies available with us where countries revived from exactly the same situation which Pakistan is facing today. Those countries successfully resolved the problem of un-registered SIMs and are now enjoying hefty growth.

We will discuss those case studies in later parts of this series.