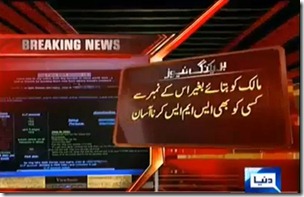 Sending fake SMS messages from someone’s mobile number without his/her knowledge or consent, a term that is technically known as SMS Spoofing, is an old phenomenon.

We were tipped by multiple readers about the availability of such SMS faking software in local market, however we then decided not to carry the news as it could aware the fraudsters of a new technique of fooling people.

Dunya News, however, carried this news yesterday by claiming that a new system has been introduced in Pakistan through which anyone can send text messages with a number ID of his/her choice.

Dunya TV said that this new system, which it dubbed as “Evil Mobile Software”, will allow anyone to send text messages from any mobile number which can cause serious privacy and social threats for anyone, especially the girls.

Since the news has reached the masses now, we thought of telling our readers a way of tracing spoofed messages through which you can prove that messages (with your number as sender) were indeed not sent by you.

What Fake SMS Sender can do?

By definition, with a spoofed SMS or faked SMS sender the originator of text message can set sender’s number of his/her choice, making it possible for anyone to send text messages from any number.

For example, with Fake SMS sender I can send an SMS which will show sender’s number as 0300-0000000, or I can set sender’s name as “ProPakistani” or anything.

This technology is used to send masked messages with alphanumeric names such as: Ufone, Warid, QAU, GIKI and so on.

How These Software Work?

All these software available in local market use services of international vendors for sending fake text messages. Countless international companies offer SMS masking to their clients who use their brand names as message sender in their marketing campaigns.

Few evil geniuses in Pakistan have developed desktop applications (they have named it VBG Fake SMS Sender) which can send text messages with any senders’ number by using network of these international SMS vendors (through APIs).

These local fraudsters are now selling Fake SMS senders by posting ads on classified websites to mint money, which is of course illegal.

How to Trace Fake SMS?

If you are victim of Fake SMS, i.e. if someone has sent text messages with your number with objectionable content then you need not to worry.

There’s a way of proving that message wasn’t sent from your number and that it is a Fake Message.

There are two ways to trace a Fake SMS:

1 – SMS center number of any spoofed message or fake message will be an international number, such as +445566776654 or +22XXXXXX or anything but not a Pakistani number (Pakistani numbers start with +92).

The SMS Message Center Number is a phone number that acts as a gateway for sending or receiving SMS messages between cellular devices. Since spoofed messages are sent by International vendors only, it is likely that SMS center number of a spoofed message will be an international number.

If you don’t know, SMS center number of a text message can be found by going in to message details.

For all messages that are legitimately originated from Pakistani networks will have following SMS center numbers:

2 – If you are a victim of Fake SMS then you can prove it wrong by obtaining your call detail from your cellular company. Almost all cellular companies (except Mobilink) offer online call detail records or you can obtain this list for respective service centers of mobile phone companies.

Spoofed message or Fake SMS will not appear in your call record, since it was never sent using your cellular network. Hence you can prove that a particular message was not sent by you or your number.

What Law Enforcement Agencies Should do?

Very simple, search on Google for those selling these VGB Fake SMS sending software. Call them as customers and get their contact details to hunt them down.

Furthermore they can contact classified websites to get these ads removed from their websites.

What You Should Do?

Spread the word, educate your FnF the ways of tracing a fake message. Report fraudsters to police or NR3C.