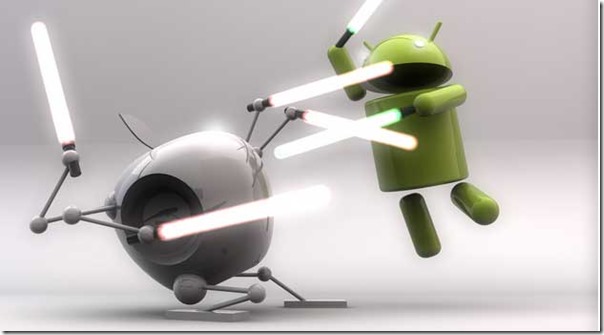 Simply said, 2012 was the year of the Androids. It didn’t only win new acquisitions in Smartphone market but also snatched market-share of other operating systems (See table below). Clearly it continued to increase its share in the market.

Other Mobile Operating Systems in the market continued to get customers as well and some of them didn’t only survive but thrived. We are here to discuss their (and Android’s) growth and improvements they had in 2012 and also what to expect from them in the future. But first, let’s start with the market-share table of Mobile OSes: 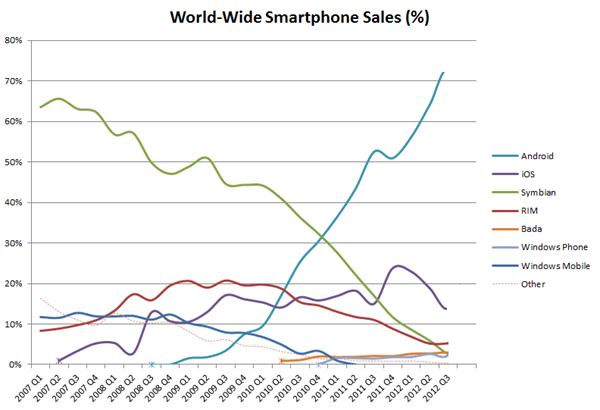 Android is easily the most popular OS of this time and apparently it will only increase its lead over the time in the future. After losing its race with iOS, Symbian and even to Windows Mobile in the first few years, the Android made a great re-entry in HTC’s Nexus One and it never looked back from that point onwards. It currently holds 75% of the smartphone market (worldwide) and is raising this figure swiftly.

Android saw the release of a major update in 2012 in Android 4.1 Jelly Bean which was showcased in the first ever Nexus tablet, the Nexus 7 in June this year. The most important thing it brought was the Project Butter which makes the Vsync of the screen work at 60 fps and also makes the CPU, GPU and display co-ordinate well.

Google also rolled out the Android 4.2 update later which brought features like better lock-screen, better keyboard, multiple user support and even better controls. We are now looking forward to the “Key Pie Lime” update which is due sometime next year.

Apple’s products have always been among the most refined in their class and iOS is no exception. First announced in 2007, iOS has become only better despite the restrictions enforced by Apple to provide a better ecosystem and keep glitches away.

iOS 6 also brought the Maps application which was declared by CNN as among the top 10 fails of the year and is madly inaccurate. If we put aside the Maps app though, iOS 6 was actually quite an update.

RIM is strongly betting on its upcoming BlackBerry 10 OS, which will be released early in 2013. And hence, all their current product developments are seemingly kept on hold.

BlackBerry 10 will be their reply to the iPhone and Android and it looks quite promising already but you shouldn’t be buying a RIM product until then.

2012 saw the release of only a handful of BlackBerry products (less than 10 to be exact) and so as a result, their market share plunged to just 4.3%. This will most probably change next year as just like Nokia, RIM has its own share of faithful customers. 2012 didn’t saw any major developments for this OS.

No doubt, the end of Symbian is near. Its market-share continued to fall after the advent of iPhone, which further fell several folds after Android arrived into the picture. With a worldwide marketshare of just 2.3%, this OS will most probably end in the near future – some say around 2014.

Some companies are still using this OS on their phones, most notably the Nokia that uses Symbian as a secondary OS on its Asha series of affordable phones, mainly because Symbian doesn’t require much GPU and runs well on less capable hardware. Symbian, like BlackBerry, remained a neglected OS this year.

Microsoft’s Windows Phone debuted just couple of year ago in 2010 and hasn’t been particularly successful so far. Their market-share of about 2% is nowhere near the 75% that Android holds but most of this share has been captured in the last year especially after their partnership with Nokia.

Windows Phone saw a major update this year with Windows Phone 8 which had features that the original Windows Phone 7 version should’ve got but still gave it an upper hand in terms of openness from iOS.

Unfortunately though, things aren’t going well for them. Their market-share has actually dropped from earlier quarters of this year. They did take a different approach earlier than Android and iOS by introducing live tiles rather than icons & grids but design isn’t everything.

Microsoft also angered old, faithful customers by declaring that old Windows Phones would be non-upgradeable to WP8 and instead presented them with a Windows Phone 7.8 update. Also the lack of a notification centre and quality apps have left customers unconvinced so we’ll have to see how it plays out for Windows Phone in the future.

2013 will be an interesting year to look out for. Because of the intense competition, the companies will be churning out some great software so it’ll be interesting to see what they’ll do to stay out of each other. We obviously will be there to cover the race from start to finish.