Mr. Sajjad Latif Awan, former Director General (Enforcement) at PTA has moved to Islamabad High Court against his transfer orders that were issued by both the members of Pakistan Telecommunication Authority.

Mr. Sajjad Latif Awan, along with other transferred employees including Mr. Faisal Bashir, former Director (Vigilance) appealed the court that transfer orders issued by Member Finance and Member Technical of Pakistan Telecommunication Authority were not in accordance with laws.

Petitioners maintained that all such operational functions can be exercised only by the Chairman and that the Cabinet Division had issued directions to both the members to not act as Chairman.

Islamabad High Court, while accepting the petition for hearing, has granted a stay on transfer orders till next date of hearing, i.e February 11th, 2013.

It merits mentioning here that Mr. Nasrul Karim Ghaznavi, the member finance and Dr. Khawar Siddique Khokhar, the member technical, PTA had relieved Mr. Latif Awan for not having a graduate engineering degree, a must have prerequisite for the post he was holding. Furthermore the order had said that Mr. Latif Awan is also not registered with Pakistan Engineering Council, another mandatory prerequisite for the post of DG Enforcement.

Interestingly, all the staff that was transferred on the orders of members was inducted by former Chairman Farooq Awan.

Analysts believe that illegal appointment Mr. Farooq Awan as the Chairman, then induction of DG Enforcement and Director Vigilance by Farooq Awan and now government saving both the appointments (one of which doesn’t meet the qualification) for which FIA officials raided PTA headquarters, harassing and almost abducting the members, depicts that there is something very serious attached behind the scenes.

Moreover, Khawaja Siddique Akbar, the Secretary Interior, heading the PTA raid depicts that Ministry of Interior has something to do with the whole situation.

It merits mentioning here that Director Vigilance and DG Enforcement are the key appointments for controlling/coverng grey international telephony.

Experts believe that whole of the tussle at PTA is now nearing its conclusive end as the court is going to best judge the decisions and their legalities.

Below is the order that was issued by both the members for suspension of Mr. Latif Awan: 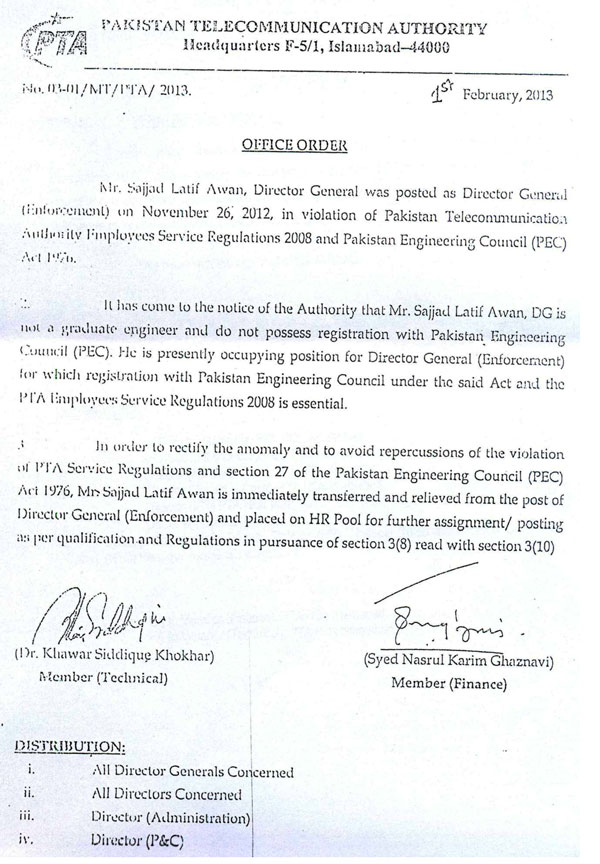