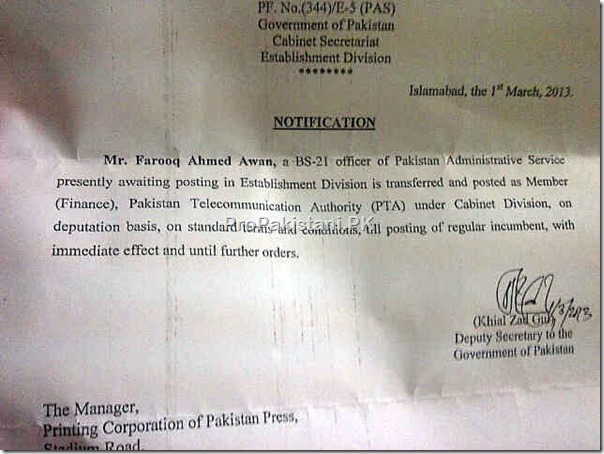 In a strange move, Government of Pakistan has appointed Mr. Farooq Awan as Member Finance at Pakistan Telecommunication Authority on deputation basis till the appointment of regular Member Finance.

Mr. Awan was previously made the Chairman of PTA but soon he was terminated on LHC orders which said that appointment was illegal and not in accordance with law.

In a notification issued on Friday, Mr. Awan – who is a BS-21 officer – is given the charge of Member Finance of the authority with immediate effect.

Mr. Awan’s appointment is made when regular member is to be appointed shortly by the government. It maybe recalled that Government of Pakistan had invited applications for the position and the process for hiring of a member finance is already initiated.

Reportedly, Mr. Farooq Awan had also applied for the position of member finance.

In such situations, Awan’s appointment on deputation is not only interesting but is also in violation with Lahore High Court’s decision.

It merits mentioning here that LHC has recently declared that appointment of Government servants as members and Chairman of Pakistan Telecom Authority (PTA) on deputation as not legal, offensive and in conflict of interest because Federal Government, is majority shareholder in PTCL.

Analyst say that telecom regulatory body is being destructed by the current government either on purpose (with an unknown agenda) or due to sheer incompetence. In both cases, the experts say, the industry is going to bear the brunt for which the government is criminally responsible.