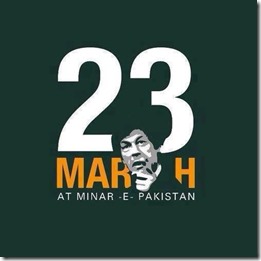 Pakistan Telecommunication Authority has plans to get mobile phone and wireless services suspended in the vicinity of Minar-e-Pakistan during Pakistan Tehrik-e-Insaaf’s rally today, reported The News.

According to details, mobile phone services and Vfone wireless service will be blocked in the area, amid security threats.

Mobile phone blockade is likely to cause serious managerial and co-ordination issues amongst the organizers and participants of the Jalsa.

At a time when PTI is expecting over 100,000 people to be there at Minar-e-Pakistan today, the co-ordination amongst the participants will remain a key issue.

News and picture updates from cellular phones will not be possible as well. PTI supporters, who are largely known for sharing live feeds of happenings, will have to wait till the evening to get their pictures uploaded on Facebook and Twitter.

It is still unclear if there will be hotspots available or not but since PTCL EVO and Nitro services will remain offline as well, party is likely to face hurdles in establishing hotspots too.