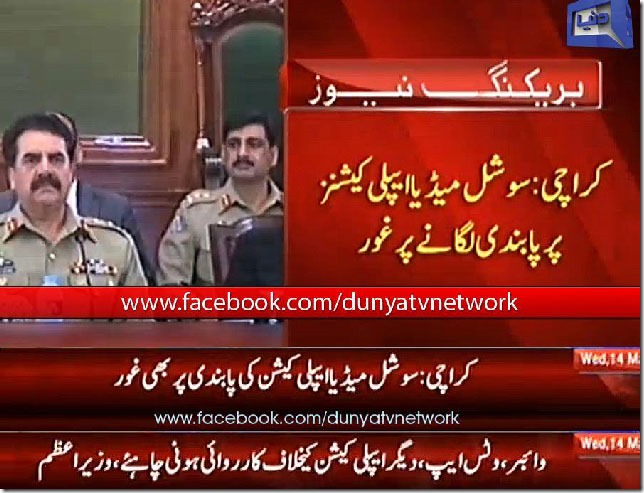 A high level meeting – chaired by Prime Minister Mian Mohammad Nawaz Sharif himself – was held in Karachi yesterday to review law and order situation in Sindh, particularly the Karachi.

PM asked the concerned authorities to block all un-registered SIMs and to make sure that social media applications aren’t used for criminal activities. He said that government can even block these social media apps in the province to ensure law and order situation.

Army Chief General Raheel Sharif and former President Asif Ali Zardari, along with other senior military and civil leadership, were also present in the meeting.

Concerned authorities told ProPakistani that they haven’t received any official notification for blockade of WhatsApp, Viber or other social media apps.

Sources said that it is very less likely for the government to block these communication apps, however, there is no doubt that leadership is not very happy with the way these social media apps work.

Sindh government had proposed a similar thing in October Last year, when it had urged the federal government to block Skype, Viber, Whasapp etc. in Sindh. Viber was briefly blocked during those days in the country, allegedly due to the same proposal by Sindh Government,

Experts said that a majority of IP addresses in Pakistan aren’t associated with geolocation and hence city-specific or province-specific blockade of social media apps or websites isn’t possible.

On another note, prime minister emphasized that no new SIM should be issued without newly deployed biometric verification system. He asked that why illegal SIMs were not being blocked.

It maybe recalled here that no verification system of SIMs and customers can ensure cent percent elimination of illegal SIMs. Since there are over 130 million SIMs issued in the country and a notable number of these already sold SIMs are either unregistered or they were registered against fake identities.

ProPakistani has mentioned this several times that Pakistani government and cellular companies will have to re-verify each and every number (issued from day one) to fully register the entire subscriber base.