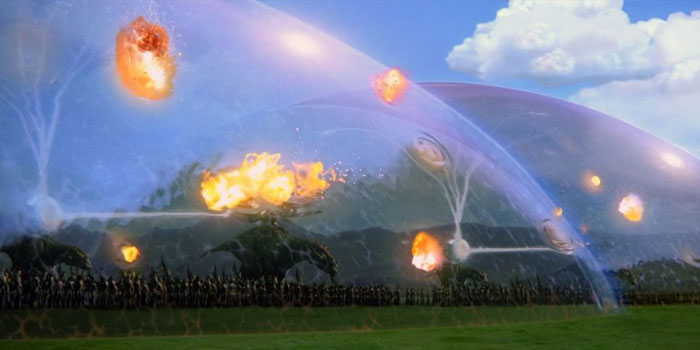 Boeing has secured the patent for a protective force field that has the potential to prevent buildings or vehicles from getting harmed by explosions. The patent describes a system that would be capable of deflecting or absorbing the shockwave coming from a nearby blast.

It would combine lasers, electricity and microwaves to instantly heat up the air around a target and develop a plasma shield that is denser than its surrounding atmosphere. According to Boeing, the system is flexible enough to be used underwater, making it feasible for boats or submarines as well.

Lasers, electricity & microwaves are combined to instantly heat up the air and develop a plasma shield

All of this may sounds a little too similar to concepts that have already been represented in the sci-fi genre. However, unlike the force fields seen in the Star Wars or Star Trek films, Boeing’s proposed system has its fair share of limitations.

For starters, it cannot protect against shrapnel or other debris flung out by an explosion. Instead, Boeing’s system can only protect an object from the after-shock of nearby explosions. That said, it is possible that the system would eventually be capable of slowing down and diverting the shrapnel being pulled in by the shockwave.

However, the system has limitations like inability to deal with shrapnel and limited period of usage

The other glaring limitation is that the force field can’t remain active for extended periods, due to which the system would require one or more sensors in order to recognize the electromagnetic signature of nearby explosives and set up its defense mechanism the instant they are triggered.

Its sensors would be capable of calculating the direction and time a shockwave would take to reach the target from an explosion. The resulting plasma shield would only protect a small region of the target, as opposed to covering the entire object.