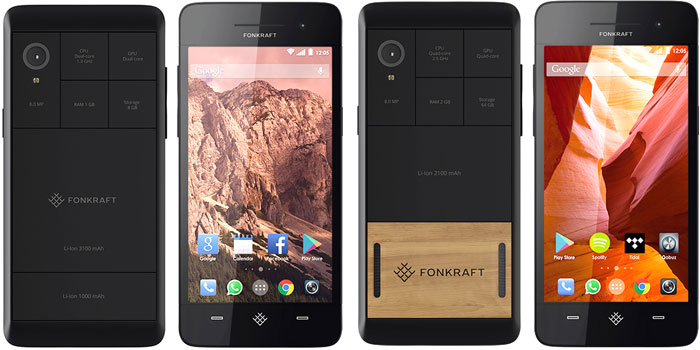 There were several names going around for modular Smartphones and the most prominent of them was Google’s Project Ara modular smartphone but it seems that an Austrian company names Fonkraft will beat Ara to be the first module based smartphone. Fonkraft is already available for pre-order on its IndieGoGo campaign page. 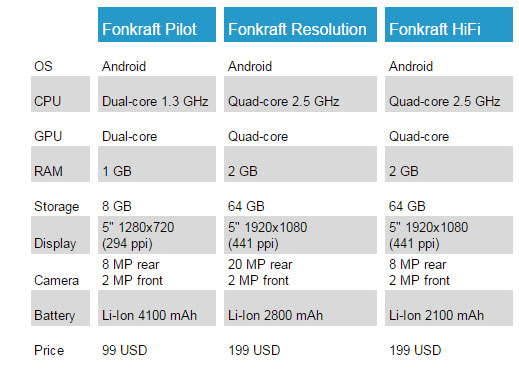 The modular smartphone comes in different pre-set models that can be customized as per the user’s requirement. The basic skeleton of the phone comes with a 5-inch 1080p display, Android Lollipop OS and plenty of customization options.

In other words, the users can swap out the camera, battery (or batteries), CPU, RAM, GPU and more. All models come with 4G support as well as Bluetooth, NFC, GPS and GLONASS. So if a user wants to upgrade their phone or replace something that’s broken all they have to do is swap what they want to upgrade or replace.

The Fonkraft starts with the base model that costs $99 and is aimed at battery performance. The phone price includes two battery modules of 3,100 and 1,000 mAh for total of 4,100mAh battery. The $99 model also comes with 8MP rear and 2MP front cameras, 1.2GHz dual-core processor and GPU coupled with 1GB of RAM and 8GB of internal storage.

Next up is a $199 Fonkraft Resolution model that comes with a 20MP rear camera and 64 GB of internal storage aimed at photographers. Other internal also see major upgrades as it includes other modules with a 2.5GHz quad-core CPU(probably Snapdragon 801), 2GB of RAM, 2MP front camera and a 2,800 mAh battery module.

There’s another model available for $199 dollars that is aimed towards audiophiles named Fonkraft Hifi. The phone includes an extra module that provides 192 kHz sound module for high quality audio and back bad from wood. This one also comes with 2.5GHz CPU, 2GB RAM, 8MP rear and 2MP front camera and a 2,100mAH battery modules.

Then there’s a phone-for-all option that comes at $299. The model dubbed Fonkraft Elements comes with all the currently available modules for the modular smartphone. This means it comes with all modules that are included in other models.

This is not the end of it as Fonkraft has revealed they plan to create several other modules providing more customization options. These include a second sim slot, additional antenna support, a new 16MP camera and much more. It’s not just Fonkraft who can sell modules for the phone as the hardware platform is open source so any third party can come with any sort of module for the phone making the possibilities endless.

Fonkraft ships the phone worldwide so even Pakistanis can order the phone and have it shipped for free. The shipping will start from September, well before Project Ara, but customers can start pre-ordering right now. Project Ara has is made by a prominent brand but Fonkraft has beaten it to the market.

What are your thoughts and comments on modular phones, are they really the future of smartphones?