Telenor Pakistan’s revenue for second quarter 2015 fell marginally to Rs. 25.49 billion, down from Rs. 26 billion it generated during the same period last year.

The EBITDA margin decreased by 10 percentage points mainly driven by the SIM issuance tax in combination with high sales and marketing activities after re-opening of sales channels, as well as increased commissions and taxes for financial services.

Capital expenditure increased from further expansion of 3G network. Telenor said that it added 668 new 3G sites on to the network during the quarter, thereby increasing the 3G coverage to a total of 141 cities across the country.

Company’s consolidated operating profit stood at Rs. 5 billion as compared to Rs. 7.32 billion it made during the same duration last year.

The number of subscriptions for Telenor Pakistan decreased by 5 million during the quarter following the disconnection of unverified SIMs. The number of biometrically verified subscriptions at the end of this quarter was 31.6 million, resulting in a subscription base which was 14% lower than the same quarter last year.

Thanks to correction in SIM data and mainly because low ARPU SIMs are now blocked, Telenor Pakistan’s ARPU in local currency increased by 12% to Rs. 213.

ARPU for postpaid subscriptions, however, decreased 14% to Rs. 580 from Rs. 684 during the same period last year.

Below are financial highlights for Q2 2015: 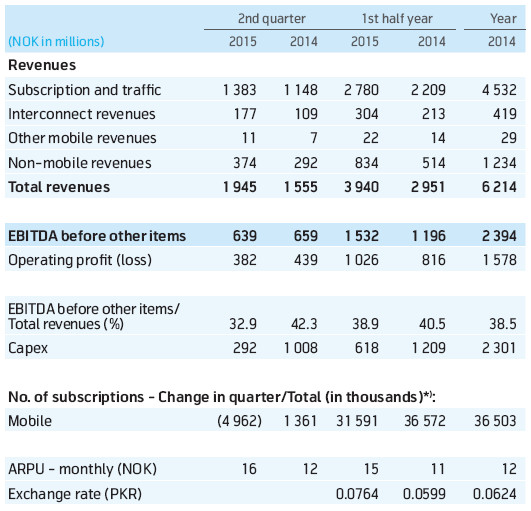