Telenor Pakistan reported its revenues to reach Rs. 26 billion during second quarter of 2014, up from Rs. 24.579 billion during the same duration last year.

Telenor said that its Total revenues in local currency increased by 6%, mainly due to strong growth in the subscriber base.

Telenor reported an operating profit of Rs. 7.33 billion, up from Rs. 6.46 billion during the same quarter last year.

The EBITDA margin increased by 2 percentage points primarily as a result of lower operations and maintenance costs following completion of the network modernisation, and reduced energy costs from several energy saving initiatives. EBITDA in local currency increased by 11% to settle at 42 percent.

Investments this quarter were related to continued network optimisation, increased coverage and capacity as well as capitalisation of 3G licence of USD 147 million or NOK 0.9 billion. 3G investments will start in second half of the year.

Company said that it grew its customers by 1.4 million during the quarter and the subscriber base was 14% higher than the same quarter last year.

Telenor continued to face challenges with its ARPU (Average Revenue Per User Per Month), which decreased 13 percent during the reported duration due to continued intense on-net competition and subscription growth in lower revenue generating segments. The drop was partially offset by revenues from data and voice bundles and increased surcharge on refills.

Company’s ARPU reached Rs. 191, down from Rs. 219 during the same quarter last year.

On the other hands, AMPU (Average Minutes Per User Per Month) increased 17 percent mainly due to attractive on-net offers. Company’s APMU for Pakistan reached 275, up from 234 during Q2 2013. 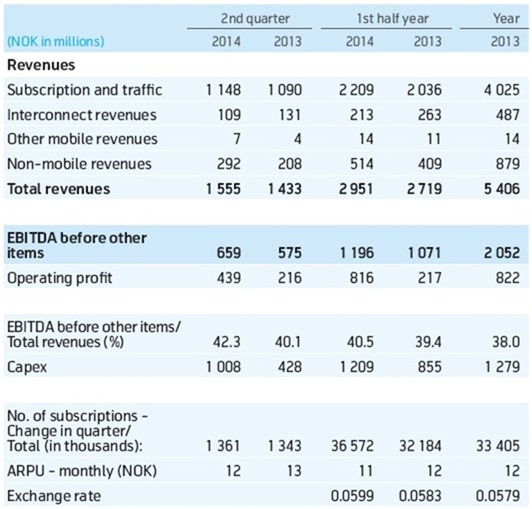