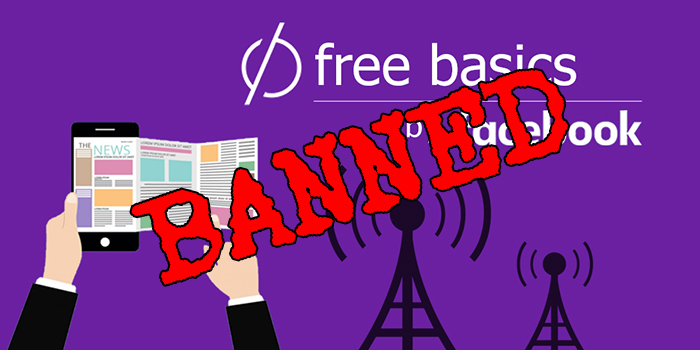 It is usual for Pakistani mobile phone companies to offer special data bundles with unlimited usage of specific internet services (such as Facebook, Twitter, WhatsApp etc.) at a fairly low fixed price. Or even worse, they offer free unlimited usage of a specific service (such as Free Basics or internet.org). This is now not possible in India.

The Indian Telecom regulator has banned Internet.org, deeming the limited data service as discriminatory and against the principles of net-neutrality. With this development, Facebook’s Free Basics — a project that was designed to offer developing markets free access to certain (albeit limited) websites — is banned in the world’s second largest country.

The Telecom Regulatory Authority of India (TRAI) said that its decision is based on feedback from eight service provider associations, 15 service providers, 42 organisations and institutions, and a limited number of individuals.

TRAI said that the decision is an effort to ensure that service providers will keep the internet open and non-discriminatory.

In Pakistan, Telenor and Zong are offering Free Basics to allow their customers free access to selected websites, while all of five operators offer special bundles (read discriminatory tariffs) for selected services.

We take a look at why this may be counterproductive in the long run.

To understand that why TRAI has classified Free Basics or special bundles as discriminatory, let us take a look at the following scenarios:

We aren’t even talking about privacy issues or problems pertaining to control over billions of users’ mindset that could be manipulated by a single entity. Many think that that’s too much if control is given to one elite group of service providers.

In all fairness, those who support Free Basics believe that this way Facebook and mobile phone companies are trying to offer internet to the under-privileged class and making them realize the benefits that the Internet can offer.

But one also has to consider the other costs — by giving unfair advantage to Facebook and selected service providers — against such limited access to fully comprehend the cons and pros of Free Basics or special bundle offers for selected services.

We’ve seen countries like China, Japan and India prioritizing their local industry over international ones, and that has, in turn, enhanced their GDP. A ‘free’ service like Facebook Free Basics doesn’t afford that opportunity to home-grown startups and companies, hurting developing countries in the interim as well as the long run.

We believe Pakistan Telecommunication Authority has a case here to look into and follow a more structured and organized approach towards net-neutrality in Pakistan.