Indicators in 2008-09 had pointed where the telecom market was heading and that’s why telecom experts had foreseen the above scenario. However, they were hoping that auction of 3G and 4G licenses (that happened in 2014) would change the market direction for good.

Experts had hoped that data revenues would ultimately come to rescue the industry like it had elsewhere in world.

Good thing with data services is that it encompasses not just the communication needs but covers many other consumer segments including entertainment, education, common life utilities etc. and hence users tend to spend more on data services as compared to pure communication services (voice and SMS).

Pakistan started adopting 3G and 4G services relatively quickly, thanks to a lack of wired infrastructure leaving mobile internet as the only option for many to go online.

3G users reached 10 million mark in just a few months. Within 30 months of auction, with an average addition of over 1 million new 3G/4G subscription every month, there are over 34.5 million 3G and 4G user in Pakistan today (Soruce: PTA).

This was all very exciting, however, the ARPUs didn’t increase and for most operators they remained the same, if not decreased.

What Went Wrong with Data Market?

To put this in layman terms: the cost incurred to setup towers, maintain them, bandwidth cost and all other related costs, makes up a per MB cost for operators. Let’s call this per MB Production cost.

Data services, all around the world, are priced while keeping this production cost (which can very from operator to operator) in mind.

Now here’s what happened with per MB revenues of Pakistani operators:

Just for reference, per MB revenues for operators in other markets are as following:

Data Revenue Per MB for Pakistan:

Clearly, the production cost of 3G/4G is higher than the price it is sold at, which is why it’s not sustainable.

For those who are thinking that data revenues of operators are growing, for instance Mobilink’s data revenue reached Rs. 4.6 billion in Q3 2016, up from just Rs. 2.2 billion from Q3 2015, this is because both users and data consumption is growing multifold.

For instance, data usage in Pakistan grew 1,631% during past two years, however, data revenues grew just 84% during the same time.

Not to mention, the production cost of data grew in proportion with the data consumption, while revenues didn’t follow the same pace.

With all this, currently operators are left with no option but to increase prices. But they aren’t doing it and here’s the reason: competition is so fierce that they just don’t dare to increase the prices for data services.

As a result, the infected market is going to die if not cured in time.

It won’t be out of place to mention that according to the Annual Audited Accounts (AAAs) submitted to PTA by mobile phone companies, three operators posted an increase (2% to 6%) in net revenues while other two operators reported decrease in revenues (-5.7% to -11%) for the Financial Year (FY) 2015 as compared to 2014.

Four out of five operators reported net losses during 2015, which illustrates just how bad the condition is for telecom operators.

PTA should come and play a role. Chairman PTA, Dr. Ismail Shah, has said this time and again that unregulated market is far better than a regulated space. Alongside, in one of his speeches, he said that operators should play freely but sensibly to remain viable in the long run.

This didn’t happen as operators in Pakistan are competing on prices only. In fact bigger operators are more inexpensive than the smaller ones, for example Ufone is most expensive while Mobilink is least expensive for per MB data rates.

Check below table for per MB prices of Pakistani operators: 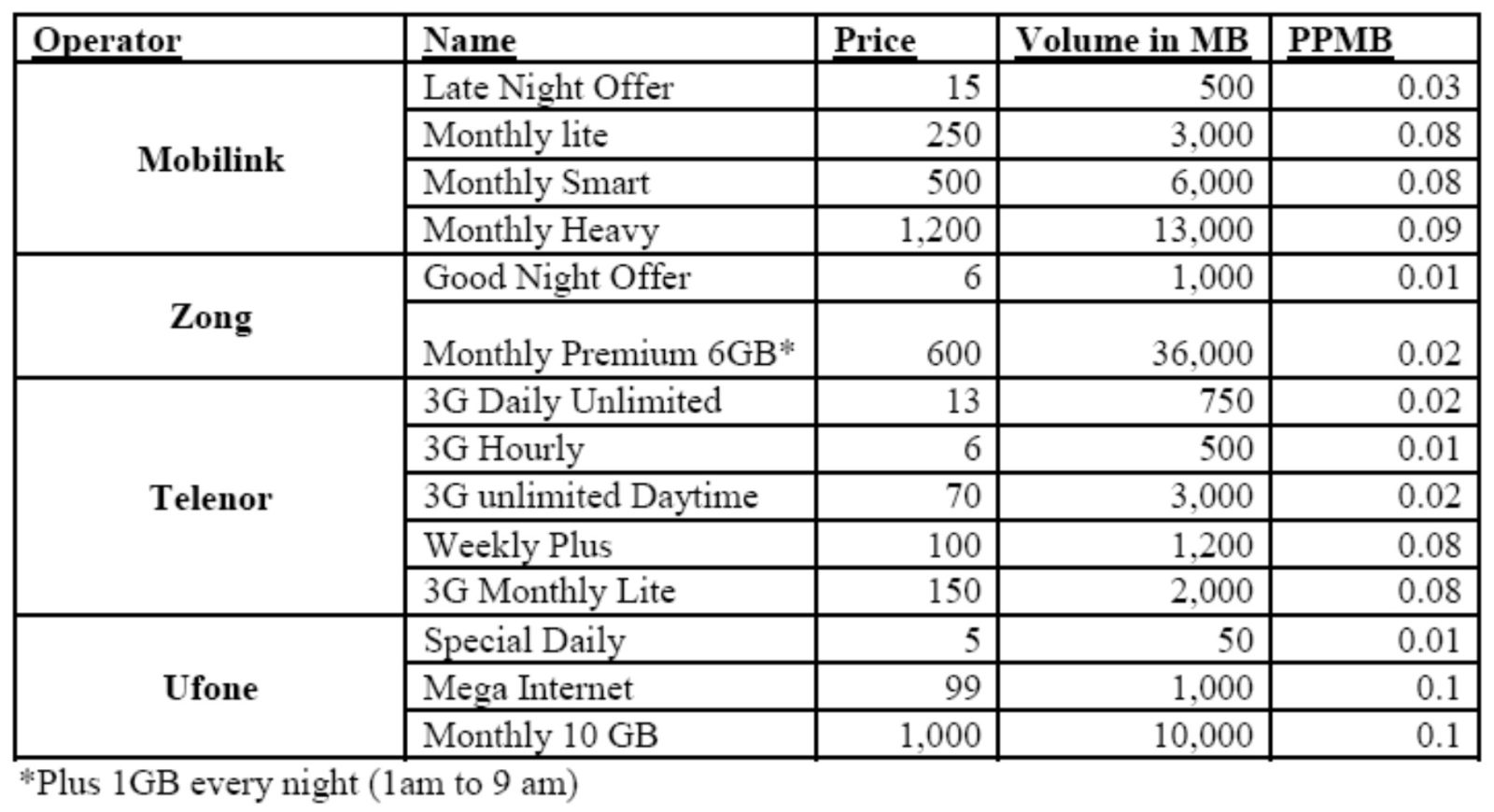 And while everyone acknowledges that there is a problem and it must get fixed, no one is willing to take the initiative.

This leaves PTA with no other option but to intervene and regulate prices. It has in fact already floated a consultation paper asking industry’s input price flooring for conventional and data services.

You can share your thoughts in below comments, while we prepare next part of this series.