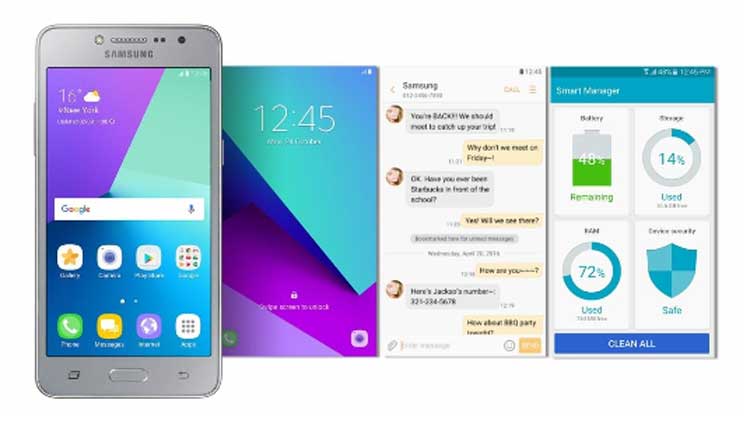 Samsung has revealed the Galaxy Grand Prime+. Its previous version – the Grand Prime was among the best-selling products, the Grand Prime + is an iterative update to its predecessor and goes one step ahead in most categories.

On the outside the phone looks a lot similar to the original Galaxy Grand Prime. You can not tell the phones apart when placed side by side.

This phone is powered by a quad-core MediaTek MT6737T processor clocked at 1.1 GHz. Performance wise the package is pretty much the same as the Galaxy Grand Prime. The RAM has went up from 1 GB to 1.5GB while the internal storage is still the same at 8GB. The phone supports expandable storage with a microSD card of up to 256 GB.

Like most other phones, Samsung Galaxy Grand Prime Plus uses Android 6.0 Marshmallow for its OS. It has the newer version of TouchWiz on it as well.

It has an 8 MP rear camera along with a 5 MP front camera and a front-flash. The front flash is pretty self explanatory and allows you to take selfies in low light conditions.

You can launch the camera through the Quick launch mode by pressing the home button twice.

The battery at 2,600 mAh is also the same as the original Galaxy Grand Prime and should provide similar battery life as well.